Roots Newsletter April 2021: Challenging times, but planning for the future 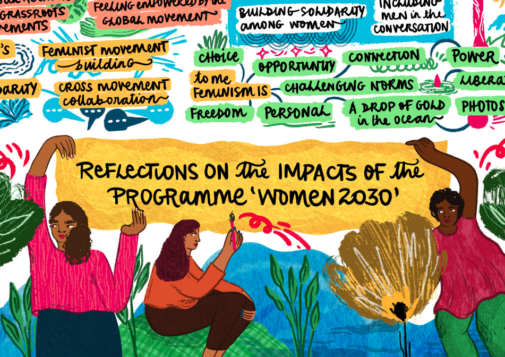 Part of a graphic recording of the celebration of the end of the Women2030 programme, view the full image here.

Welcome to our first newsletter for member groups in 2021, and an especially warm welcome to our newest member groups, Pastoral Peace & Reconciliation Initiative (PPRI) in Somalia, ZERO – Association for the Sustainability of the Earth System in Portugal, NGO Forum on Cambodia and Landelijk Netwerk Bossen-en Bomenbescherming (LNBBB) in the Netherlands. For many of us, 2021 so far has continued to bring difficult times and challenging working conditions, and we hope that you and your colleagues, family and friends are safe and healthy. Despite the challenges that still lie ahead we feel reinvigorated by our campaign and regional events that took place in February as part of our annual Monitoring, Evaluation and Planning meetings. We thank you again for your enthusiastic inputs into our short and long-term plans!

We began the year with the publication of our latest Forest Cover report on the vicious cycle of corporate capture of policy-making and perverse incentives for sectors that harm forests (in English, Spanish, French, Russian and Portuguese). Nine country case studies focusing on industrial livestock and feedstock production, commercial tree plantations and bioenergy generation made a powerful case that the only way to stop deforestation is to break the vicious cycle of corporate influence over public policies and the support for harmful industries that it creates. The report was launched during a webinar where key examples from the report were presented.

Another milestone was the completion of the five-year Women2030 program, which was celebrated with a two-day virtual gathering for participants and captured in an inspiring graphic record. As Women2030 has come to a close our participation in the Green Livelihoods Alliance (GLA) has taken off, where we are providing strategic support to Women Engaged for a Common Future (WECF) who is the technical partner for gender justice and ushering in an exciting five-year programme involving many of our members. Also within the framework of our Gender Justice campaign, in March we celebrated International Women’s Day with a series of interviews with three of GFC’s women leaders.

While all UN processes continued to be virtual, we followed key processes like the preparations for the Climate Conference of the Parties that is tentatively planned for November, and the preparations for the Conference of the Parties of the Biodiversity Convention that is tentatively planned for October 2021. A number of GFC member groups and team members participated in the virtual informal meetings of the Convention on Biodiversity’s Subsidiary Bodies in February, with submissions and contributions to joint statements by the CBD Alliance and the CBD Women’s Caucus on the need to redirect perverse incentives, divest from biodiversity destruction and respect the rights of Indigenous Peoples, local communities and women. We also co-signed a letter of protest against the corporate capture of the UN Food Systems Summit, and participated in the UNEP LAC Environment Minister’s Forum, as well as several other events.

We commemorated a number of other important occasions, such as: a piece on International Day for Social Justice by FECOFUN on the vital role that Nepal’s community forests are playing during the pandemic; the release of a case study on International Day of Civil Aviation looking at plans to use carbon offsets to reduce emissions from flying; the publication of two contrasting photo essays on food production models in Chad and Brazil on Human Rights Day; an opinion piece on the Green Climate Fund and how it is driving climate finance towards private-sector led projects that harm our most vital carbon sinks on International Day of Forests; and an op-ed on Earth Day calling out the corporate takeover of the UN’s food, biodiversity and climate agenda.

Another important opportunity for advocacy was the latest Global Environment Facility (GEF) council meeting, where we published an open letter to GEF and UNDP that called for thorough evaluations of two highly problematic projects involving eucalyptus plantations. UNDP has since engaged with us over conducting these evaluations, which we hope will take place later this year.

Over the past four months we’ve also supported a number of campaigns by member groups and allies, including an open letter denouncing plans for Namibian wood to be burned in German power plants, a report revealing how Indonesia’s proposed food estate projects threaten to create a social and environmental disaster in West Papua, a letter condemning attacks by the Myanmar military junta on Indigenous communities, a letter protesting a dirty deal between Biden and Bolsonaro on the Amazon, a letter to support the rights of Andalgala communities in Argentina to protest large-scale mining projects, and a letter to protest the inclusion of bioenergy and logging in the EU Climate Mitigation Taxonomy Delegated Act.

Finally, we wish to express our deepest sorrow over the deaths of Estebancio Castro-Diaz, a former GFC board and staff member, and Ericson Quoigbay, of our member RICCE in Liberia. Our thoughts are with Estebancio and Ericson’s families and our friends and colleagues at FPCI and RICCE, and we wish them great strength in coping with their losses.

Open letter to the Global Environment Facility and UNDP: no more climate finance for tree plantations and bioenergy (3 December)

Women’s leadership in forest conservation and governance is central for an equal future: Voices from GFC (8 March)

GFC Partners with WECF in the Green Livelihoods Alliance (21 April)

The Summits of the Destroyers-in-Chief: We must resist the corporate takeover of the UN’s food, biodiversity and climate agenda (22 April)

We encourage all of our members to send us your news, whether it be an event, a blog, a testimony, a photo essay or your press releases. We can help to share your campaign materials!
Contact us: gfc@globalforestcoalition.org