Forest ecosystems are crucial to maintaining countless diverse but interconnected systems that sustain people’s livelihoods, replenish water sources, and nurture biodiversity, which all combine to form important parts of a healthy environment. Deforestation has a direct negative impact on these dependent/connected systems because in addition to causing the destruction of biodiversity, drying of water sources, and soil erosion, it also directly impacts forest communities. This then creates new inequalities and exacerbates existing ones since people lose their primary livelihood means, their territories, as well as the socio-cultural activities deeply linked to their forests. Often, Indigenous and rural women are disproportionately affected by forest loss given their daily roles and practices that depend on healthy forest ecosystems. Ultimately this leads to a disproportionate increase in women’s burden of work, both reproductive and productive.

Women in all their diversity experience marginalization in multiple and intersecting ways, depending on their social status, ethnicity, age, class, sexual orientation, and gender identity, amongst others. They face systemic barriers from patriarchal social norms that exclude them from decision-making to discriminatory laws and practices that prevent their access to land and forests. Extractive activities supported by a capitalist economic system that privileges GDP growth and corporations over people’s welfare and healthy ecosystems lead to the degradation of forests and the violation of women’s rights. Consequently, it is integral to analyse the gender-differentiated impacts of the drivers of deforestation and to promote women’s rights in forest conservation policies.

GFC collaborates with local women’s groups and communities to research and understand the impacts of deforestation at the community level and document community-based and women-led initiatives and solutions to halt biodiversity loss. Capacity building from local to global levels on gender-responsive forest policies and women’s rights, decision-making, and participation in forest conservation is also a key strategy of GFC. The Gender Justice and Forests Campaign advocates for women’s rights and gender-responsive forest conservation policies, and also seeks to integrate gender justice into all our other policies and GFC campaign activities.

The Global Forest Coalition is a strategic partner of Women Engage for a Common Future (WECF) in the Green Livelihoods Alliance’s “Forests for a Just Future” Programme. GFC is collaborating closely with WECF, which is engaged as a GLA technical partner on gender.

We work with the Women’s Major Group (WMG) on sustainable development as well as tracking developments at UN Environment processes.

We are part of the Women and Gender Constituency at UNFCCC process, the CBD Women’s Caucus at the Convention on Biodiversity, and Women4Biodiversity.

We were a partner of the #Women2030 Programme, which promoted gender-responsive implementation of the Sustainable Development Goals in 52 countries around the world under the leadership of coalition of five organisations. Follow #women2030 Facebook and Twitter 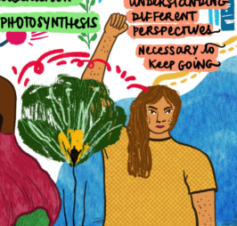 Respect for women’s rights at stake: The gap between real life and the UN’s good intentions
Women’s rights and traditional knowledge are crucial for conserving biodiversity in Kyrgyzstan
Forest conservation must address violence against women
Land rights and livelihoods key to achieving sustainable development for Kenya’s indigenous women
Forest loss for large-scale agriculture and extractive industries goes hand in hand with violence against women
New times for women and gender issues in biodiversity conservation

Originally published by Women4Biodiversity Guest article by Simone Lovera, Global Forest Coalition   Women’s groups and many other actors have frequently highlighted the need for more coherence between climate and biodiversity policy. Yet, sadly, several bodies of the UN Framework Convention on Climate Change (UNFCCC) continue to ignore discussions in the Convention on Biodiversity (CBD) and other bodies. The UNFCCC Standing Committee on Finance, which met in late September, is no exception, as it decided to organize an entire forum on …

Published in Mongabay by Simone Lovera on 26 October 2022 Photo by Abhaya Raj Josh/Mongabay: A member of the Bhimeshwori Sustainable Farming Group at her agroforestry farm in Kavre, Nepal…

The Global Forest Coalition is pleased to bring you a new report, to continue the important messaging around the International Day of Rural Women: A Gendered Perspective on the Proposed…

Gender Engagement is Crucial for Biodiversity in Central Asia

“Being a woman means resistance, to fight for the conservation of forests”

By Valentina Figuera Martínez, Gender Justice and Forests Campaign coordinator | August 5, 2022 “What does it mean to be a woman in my territory today?” was one of the…

The Women and Gender Constituency (WGC) is now calling for applications to the 2022 annual Gender Just Climate Solutions Awards, conducted with the support of the Climate Technology Centre and…

“Another world is not only possible, she is on her way.” ― Arundhati Roy The Women’s Major Group has just launched its Position Paper for the 2022 High-Level Political Forum…

HerstoryofChange on International Day of Forests – The Story of Jeanette Sequeira

Today it is March 21st, International Day of Forests. It’s an important day for Jeanette Sequeira, coordinator of the Gender Justice and Forests campaign at Global Forest Coalition & Activist…

Gender justice and livestock farming: A feminist analysis of livestock and forest policy-making

The Glasgow Leaders’ Declaration on Forests and Land Use, signed in November 2021 during COP26, pledged to end deforestation by 2030. This is a full ten years later than the…

Gender justice and climate action: A feminist analysis of forest and climate policy-making

As the global climate negotiations convene for the 26th time, this time in Glasgow, Scotland, we are reminded once more of the extent to which climate change is the largest,…