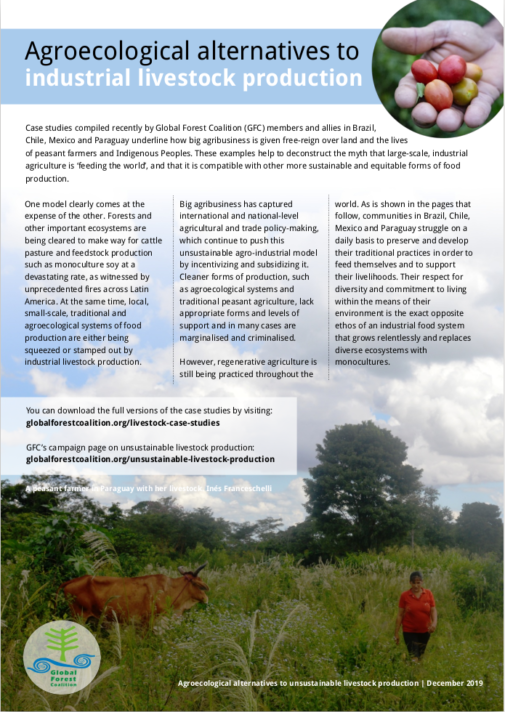 Case studies compiled recently by Global Forest Coalition (GFC) members and allies in Brazil, Chile, Mexico and Paraguay underline how big agribusiness is given free-reign over land and the lives of peasant farmers and Indigenous Peoples. These examples help to deconstruct the myth that large-scale, industrial agriculture is “feeding the world”, and that it is compatible with other more sustainable and equitable forms of food production.

One model clearly comes at the expense of the other. Forests and other important ecosystems are being cleared to make way for cattle pasture and feedstock production such as monoculture soy at a devastating rate, as witnessed by unprecedented fires across Latin America. At the same time, local, small-scale, traditional and agroecological systems of food production are either being squeezed or stamped out by industrial livestock production.

Big agribusiness has captured international and national-level agricultural and trade policy-making, which continue to push this unsustainable agroindustrial model by incentivizing and subsidizing it. Cleaner forms of production, such as agroecological systems and traditional peasant agriculture, lack appropriate forms and levels of support and in many cases are marginalised and criminalised.

However, regenerative agriculture is still being practiced throughout the world. As is shown in the pages that follow, communities in Brazil, Chile, Mexico and Paraguay struggle on a daily basis to preserve and develop their traditional practices in order to feed themselves and to support their livelihoods. Their respect for diversity and commitment to living within the means of their environment is the exact opposite ethos of an industrial food system that grows relentlessly and replaces diverse ecosystems with monocultures. 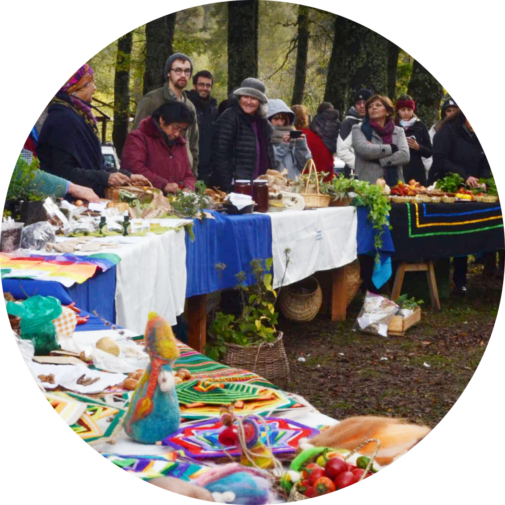 In Chile, the growth of large agricultural properties has been accompanied by the loss of small farms. However, small farms remain essential; the 74.1% of agricultural holdings in Chile that are under 20 hectares produce more than half of the food consumed domestically. Some key characteristics of the agroecological systems used by small producers are described below.

2. Waste management: On small farms, animal waste is used as fertilizer, forming part of the productive cycle, returning to the soil many of the nutrients extracted in agricultural production.

3. Animal Breeds: In comparison with the conventional livestock industry, agroecological producers use heritage breeds of animals that are less productive but better adapted to local environmental conditions, and hence they get sick less often, requiring fewer nutritional supplements and medicines. This means that it is possible to obtain most of the inputs needed for production within the farm.

4. Inputs: In Chile, small farmers are encouraged to embrace agro-ecology, replacing synthetic pesticides with organic or biological methods of pest control, which generate less or no impacts on human health and the environment.

5. Markets: The markets used by industrial cattle producers are usually far from production centers, in contrast to agroecological producers who develop local circuits of production and consumption.

Given the need to enhance production alternatives that are sustainable and rational from an environmental point of view, governments must take steps to stem the disappearance of peasant agriculture and stop facilitating an industrial system that requires more and more external resources to sustain itself. 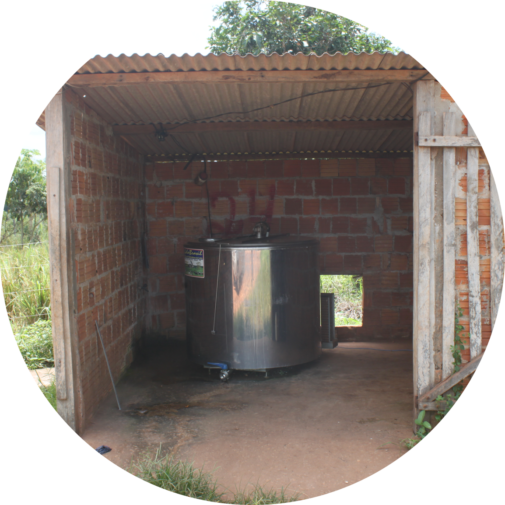 Roseli Nunes is an agrarian reform settlement in southwestern Mato Grosso that has resisted Brazil’s hegemonic agribusiness model for almost 20 years. It is surrounded by large, intensive farms in a state that has been heavily deforested; it has the largest cattle herd in the country (about 31 million); and it produces more soybeans, corn and cotton than any other Brazilian state.

Roseli Nunes is a symbol of peasant resistance and the struggle for land. Once a cattle ranch where rural workers were held in slave-like conditions, it was expropriated by the Brazilian state in 2000 following a battle led by the Landless Rural Workers Movement (MST). The ranch’s 11,000 hectares were divided equally between 331 families, with each receiving a 25-hectare plot.

Agroecology at Roseli Nunes is the antithesis of the surrounding industrial farms. It involves productive smallholdings, agroforestry systems, pasture management, creole seed production, women’s empowerment, the production of a diverse range of fruits and vegetables and raising a range of drug-free and heritage breeds of livestock and farm animals.

The Regional Association of Agroecological Producers (ARPA) supports many families at Roseli Nunes and two other agrarian reform settlements with the aim of achieving food sovereignty through socially just methods of production and economic management.

Recent setbacks imposed by conservative forces and accelerated by the Bolsonaro regime have had direct implications for agroecological systems there and have reduced the number of families that ARPA is able to support. However, for those still involved, agroecology remains the most politically, economically and environmentally viable option available. 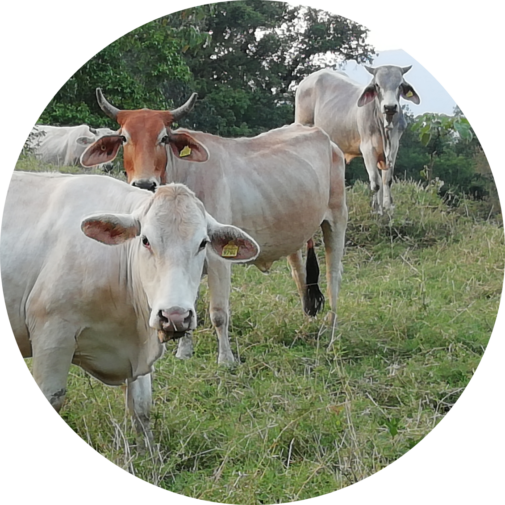 In Mexico, there are four million small rural producers using traditional agricultural activities that do not fit into industrial models of production. This is because the size of their production units is limited by the amount of land each family owns and local agro-ecological conditions. They usually work with family labor and involve women and children in the management of their natural and financial resources; their objective is to achieve optimal use of natural resources instead of the maximization of profits.

Agroecological systems generally support low loads of cattle. The vegetative cover tends towards diversity, and when tree species are present, they provide shade for cattle and enable the production of fruit, medicinal plants and even wood for fuel.

Agroecological systems make use of green water to grow vegetative cover and blue water for animals’ troughs. They also favor the botanical composition of vegetative cover, the biodiversity of the ecosystem, and in some cases, constitute reserves for wildlife and endangered species. When they are well managed, they contribute to reducing soil erosion and improving fertility due to the absorption of nitrogen from manure, while the hoofprints of cattle turn the soil and promote green water infiltration. Due to the low animal load, GHG emissions are reduced, and the vegetation favors carbon sequestration into soils.

Agroecological models of production are sustainable and designed for a more efficient and effective use of natural resources. 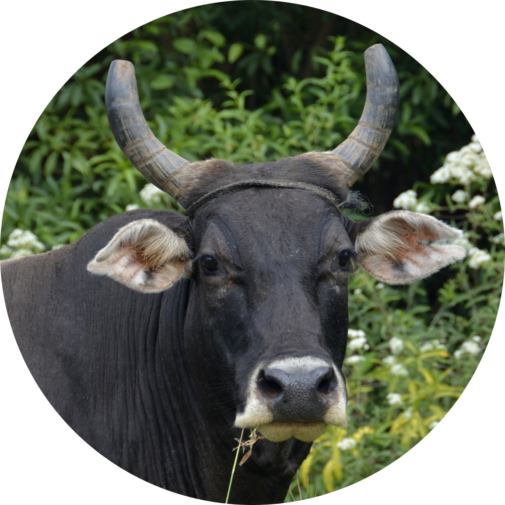 by Miguel Lovera and Inés Franceschelli

Paraguay’s population is 38% rural, a figure that is very high for the region. This rural population resists the advance of agricultural extractivism and maintains productive practices in harmony with nature, with low-impact consumption patterns.
The majority of peasant families have small numbers of cattle on their farms. These small herds, which are adapted to the environment and linked to local livelihoods, contribute to family subsistence through the sale of by-products, and their care is mainly the responsibility of women, who traditionally own and manage this good. Usually, the animals have names and reside on the premises of the family home, sheltered from the elements.

It is not known how many cattle are in the hands of peasants, since they are often not included in official statistics. The animals on these farms are not branded, and in some cases they are completely outside of the state’s health system. On peasant farms, slaughtering is done through municipal permits and the distribution and/or sale of meat obeys the criteria of a solidarity economy before those of the market.
The livestock industry is spreading across the national territory thanks to fraudulent land titles, the support of security forces paid for by investors, and judges and prosecutors who consistently rule in favor of the highest bidder.

Meanwhile, the “other” ranching carried out by small farmers resists despite the total lack of public policies that favor it; peasants in Paraguay lack access to credit or agricultural insurance, training or technical assistance. Peasant communities are isolated and do not even have nearby municipal markets that offer sanitary conditions in which to sell their products. This abandonment by the state constitutes in itself a public policy aimed at exterminating the peasant population from rural land, identified as a “nuisance” for the expansion of capitalist extractive industries.

The recent wave of forest fires across Latin America are clearly linked to the livestock sector and the policies and support mechanisms that underpin it. Further intensification of a model that ignores traditional livestock farming and agroecological systems, and in some cases puts them in direct conflict, will only mean continued deforestation, biodiversity loss, water scarcity, violations of human rights and animal welfare, and concentration of lands into the hands of the few.

It is therefore hard to understand how most financial and political support for food production still goes to a model that focuses on quantity rather than quality and where the large quantity of food produced is so unevenly distributed that some parts of the world suffer from chronic hunger while others face a public health crisis due to obesity or over-nutrition. On the other hand, these examples of small-scale and peasant farmers show how their practices have a much bigger potential to curb the food and biodiversity crises and make communities more resilient through providing healthy and safe food in harmony with the environment around them.

Agroecological producers are waiting for appropriate support which in turn would contribute towards a much-needed transformation of current food and agricultural systems, towards one that values the health and well-being of animals, humans and the planet, that is not dictated by market forces and global commodity trade and that encourages biodiversity and cultural diversity.