The Chaco under attack

A photoessay about indigenous communities in the Chaco region of Paraguay, and their existence in a landscape under threat by agribusiness and international trade policies.

Today is World Food Sovereignty Day. To commemorate the occasion, we bring you this photo-essay to highlight the plight of indigenous communities living in the shadow of toxic agribusiness, with their territories polluted and their resources extracted and exported abroad.

“El Chaco” has been home for millennia to at least 15 groups of Indigenous Peoples. But over the past few years the land has been invaded by agribusiness, for unsustainable livestock production, to the extent that there are now twice as many head of cattle in the Chaco then there are human beings in the whole of Paraguay. As a result, the Chaco is losing forests at a rate of 2,000 hectares per day, and is recognised as one of the places on Earth that is being most rapidly deforested. And to make matters even worse, the land is increasingly being covered in genetically modified soy and the toxic agrochemicals that go hand-in-hand with it. The soy is primarily produced as feedstock for factory farms in Europe and other parts of the world. Cattle ranchers and soy planters have stolen indigenous land in the Chaco, and forced its people into slave labour.

Every day the Chaco’s inhabitants see immense convoys of ships and barges passing before their eyes, carrying away their resources to feed others in faraway places, with the profits of this trade remaining out of their reach. The unjust and exploitative trade rules that have caused the agribusiness take-over of the Chaco are set to worsen further with the proposed EU-Mercosur Free Trade Agreement. This deal will give corporations even more power to prioritise producing steak, pork and chicken for European consumers, while the lives of the Chaco’s inhabitants will remain submerged in poverty and hunger.

The photos below offer a glimpse into the lives of the Chaco’s Indigenous Peoples, and the struggles they face. 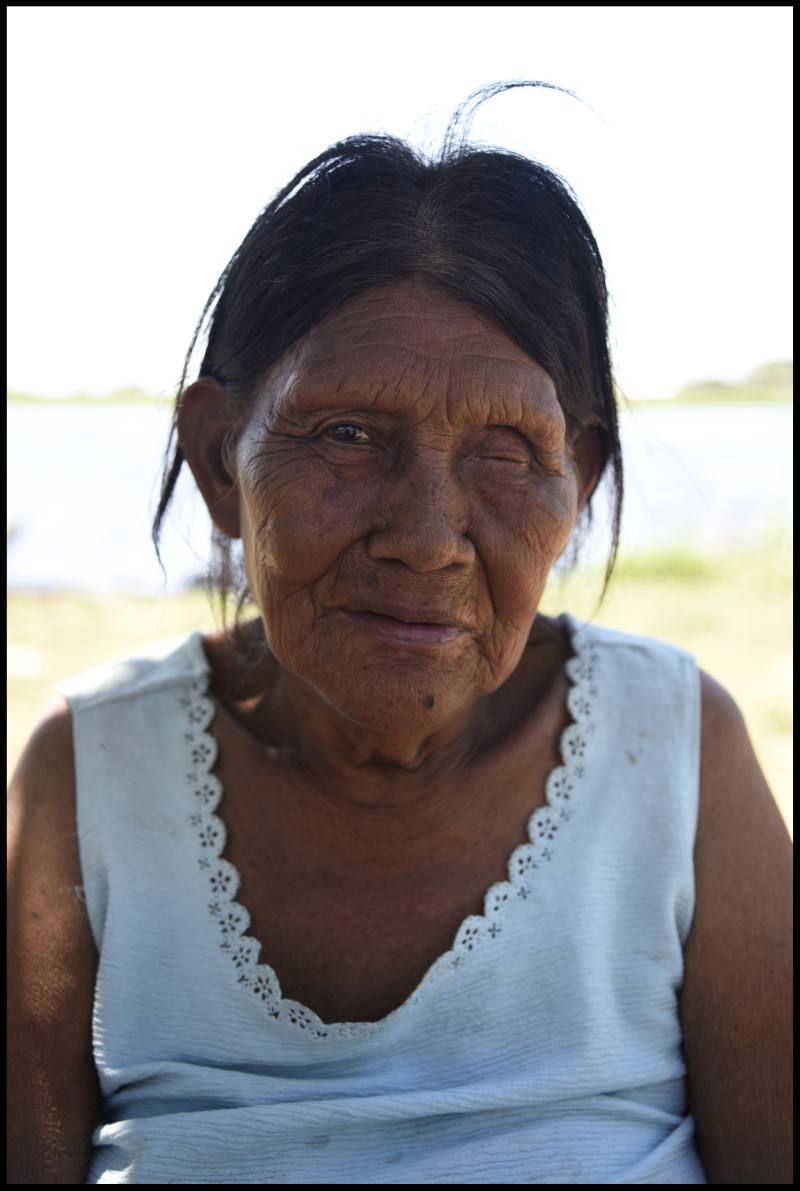 Despite living along the Paraguay River, one of the most important navigable rivers in the Americas, the Indigenous Peoples of the Chaco live completely isolated lives, forgotten by governments and public policies.

Pictured here is an Ayoreo elder from the community of Puerto María Auxiliadora.

Looking into the distance, she doesn’t say a single word as she listens to others narrate her story. She used to live in the forest as a member of one of the remaining uncontacted tribes in the Chaco. While still young, in the 70s, she was contacted and taken to “civilization”. Most Ayoreo die from diseases like measles when they are contacted for the first time, she was one of the few who survived. 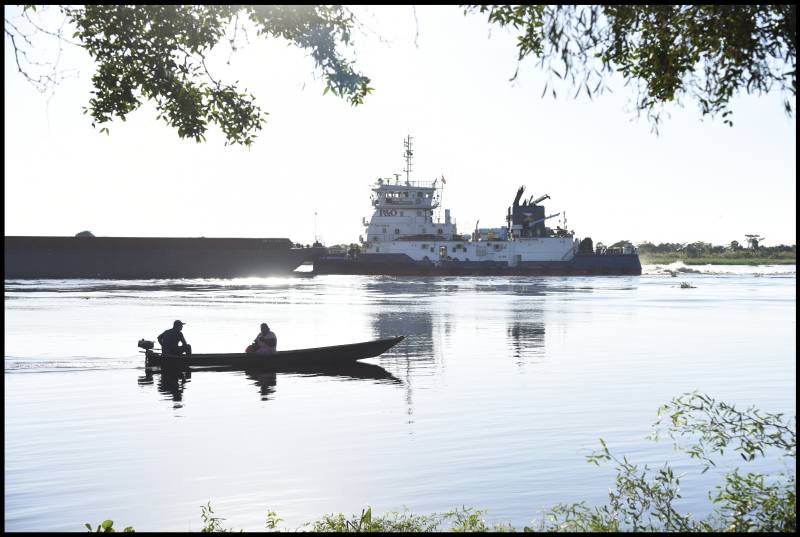 Pictured here is Puerto Diana in Alto Paraguay. In the foreground, members of the Ishir indigenous community are crossing the Paraguay River by a small boat. In the background is a gigantic tugboat, pulling a convoy of barges carrying products from the Chaco including soybeans. In Paraguay, two main products make up to 80% of export value: cattle and soybeans. A trade agreement between the EU and Mercosur countries will only exacerbate the high rate of deforestation and land clearance to make way for cattle ranching and monoculture soy fields. 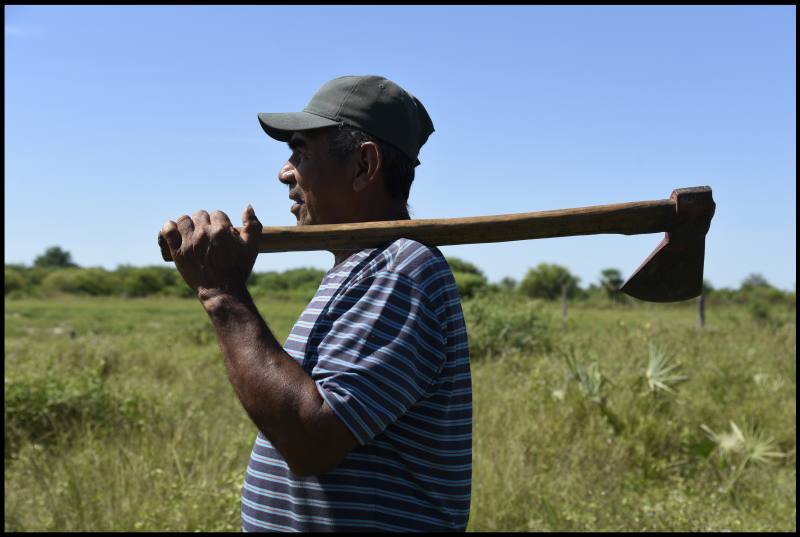 An Ishir man from Puerto Esperanza walks towards the community limits to cut firewood.

The communities here depend on fishing, and they also raise pigs and chickens for subsistence. Virtually nothing remains of their forest because everything has been cleared to plant soy and graze cattle. These communities are in a constant battle with agroindustry and large cattle ranchers, who have taken their lands and limited their access to it. The total absence of state infrastructure means that there there is no rule of law in these regions.

The EU-Mercosur agreement could create a framework that restricts the state’s ability to define policies that favour sustainable production and consumption. Fiscal reforms and subsidies supporting small-scale farmers and other sustainable livestock production methods would not be possible under the agreement currently proposed. This would lock places like the Chaco into continued cycles of ecological destruction, displacement of Indigenous Peoples and resource extraction. 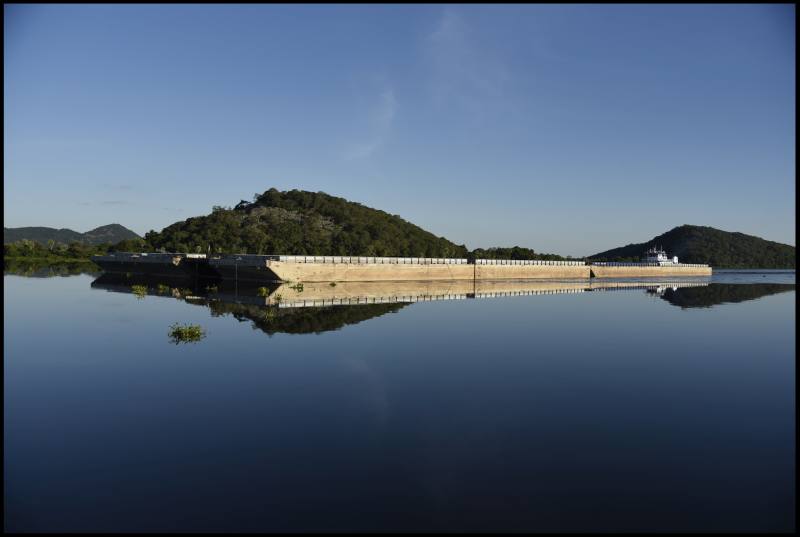 A convoy of eleven barges sails along the Paraguay River crossing in front of a mountain range that lies in the neighboring country of Brazil.

In Paraguay, soybean farming has displaced food production to the point that 60% of vegetables consumed by Paraguayans are now imported. 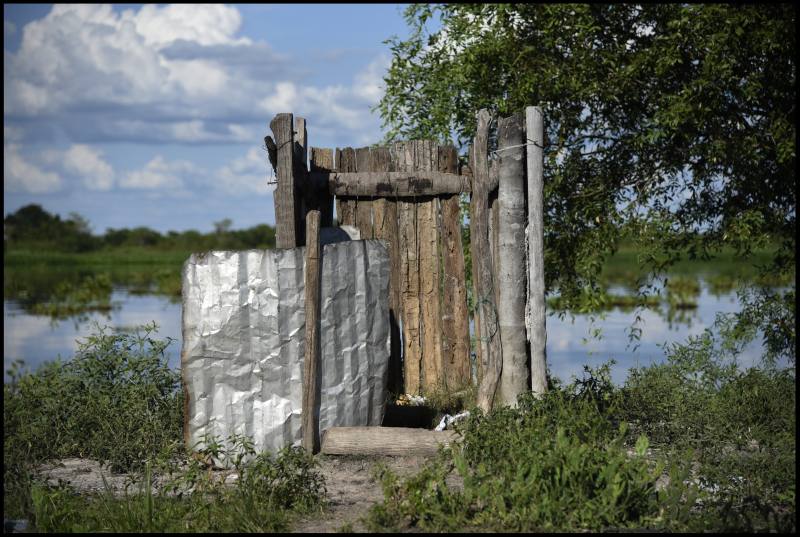 Pictured here is a makeshift bathroom made with Caranday wood on the banks of the Paraguay River in Puerto Pollo. Caranday is a native palm, used for constructing homes.

The state’s abandonment of the Indigenous Peoples of the Chaco is such that local communities here lack even basic health, sanitation and communication services. The revenue from soy and beef production, concentrated into the hands of the few, has not yet reached the people of the Chaco. While the corporations increase their profits, local people face extermination. 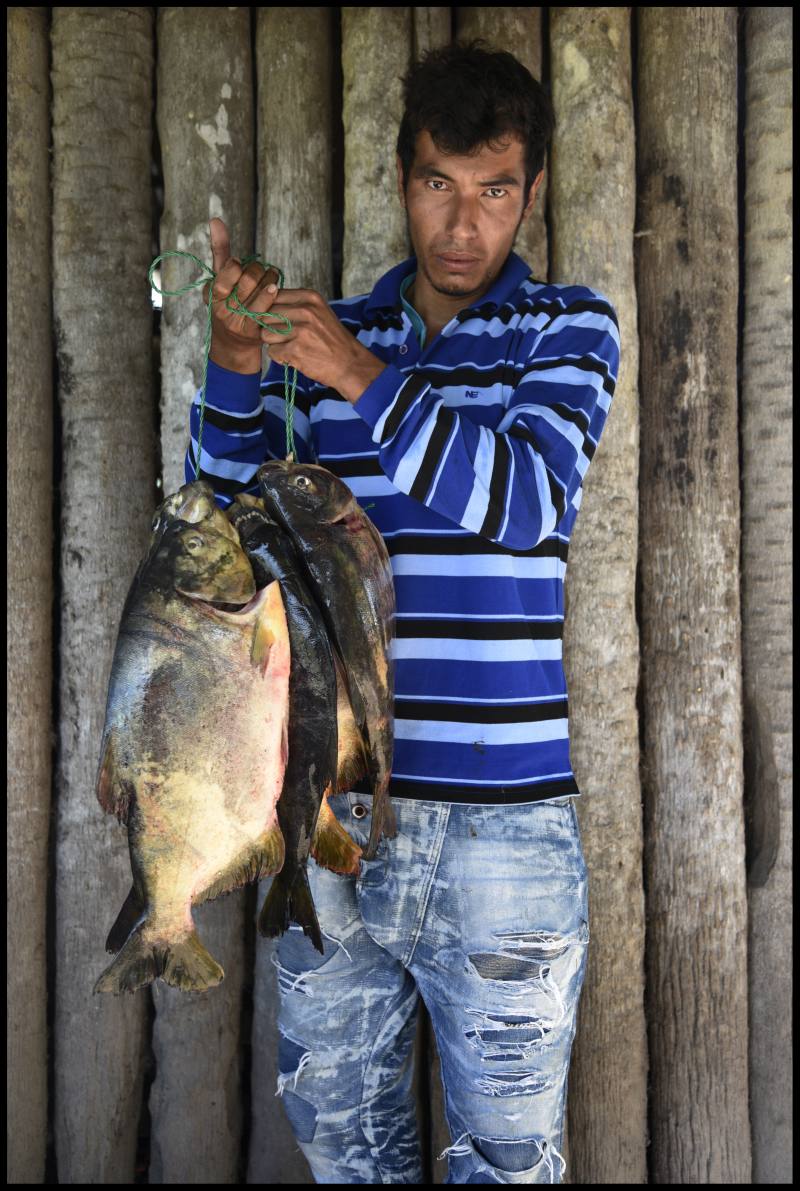 Pictured here is a fisherman from the Ishir community of 14 de Mayo. He displays the day’s catch in front of a Caranday bark wall.

Artisanal fishing is one of the main sources of food for the indigenous communities of the Chaco. The river today is significantly polluted, a result of the massive quantities of toxic chemical runoff from genetically modified soy plantations in the area. 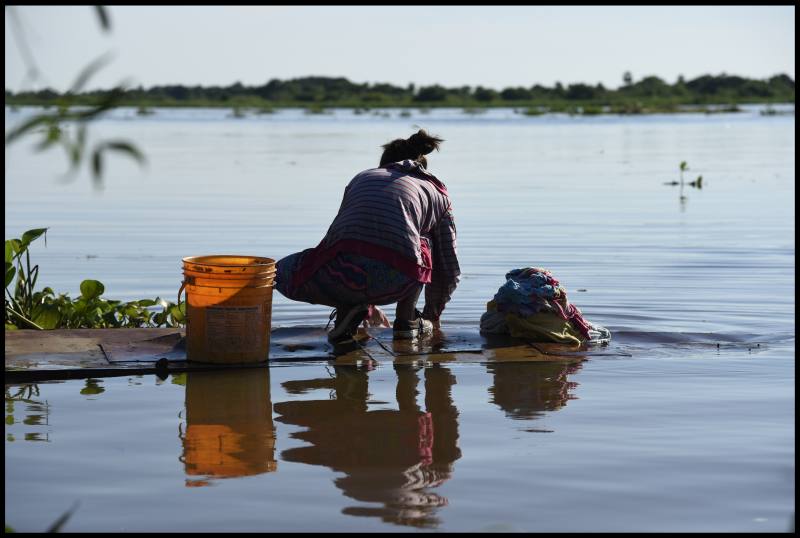 A young woman washes clothes in the waters of the Paraguay River in the Ishir community of Puerto Diana.

The majority of women do housework and produce handicrafts. Some have managed to go school and have become teachers in their own communities. But sadly, in order to make a living many also end up as sex workers in the capital, Asunción, or in neighboring Brazillian towns. 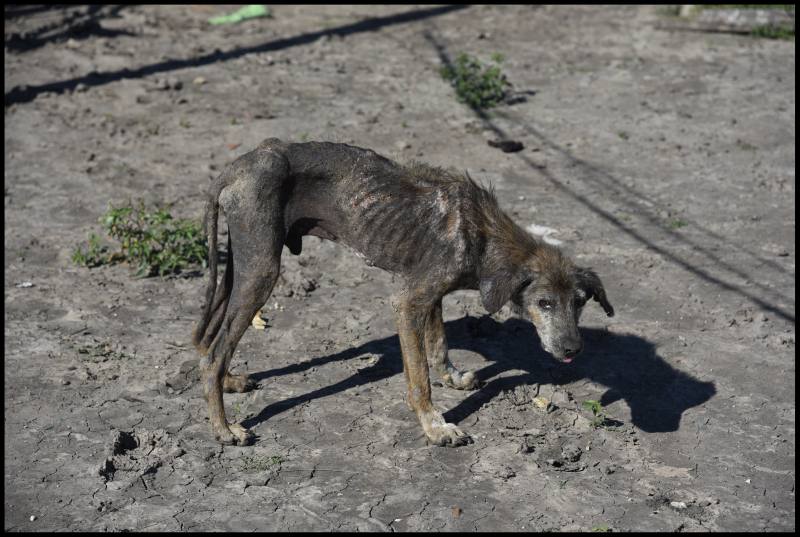 A starving dog looks at the camera. Hunger prevails over a land that looks sterile thanks to an economic model of extractivism that prioritizes the (over-) consumption of meat and dairy by Europeans over the food sovereignty and survival of Indigenous women and men in the Chaco.

Government policies should ensure healthy diets, however, under trade agreements like the EU-Mercosur, corporations drive decisions, using land for commercial purpose rather than food sovereignty. 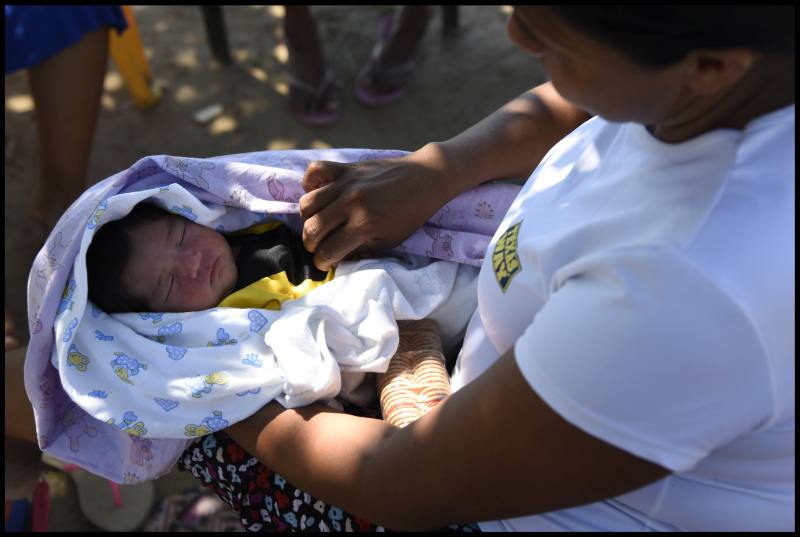 Life resists death and destruction in the Chaco.
In the Ayoreo community of Carmelo Peralta, a mother lovingly looks at her newly born two-day-old daughter.