With barely ten days to go for the polls to the State Legislature, the forest villagers in the Himalayan foothills, Terai and Duars of the eastern Indian State of West Bengal have created a stir amidst the highly charged political atmosphere. Approximately 250,000 forest people residing in more than 250 forest villages have called for to press for the NOTA (None of the Above) button on the election day to protest and expose the role of the mainstream political parties in not implementing the historic Forest Rights Act to confer and record the rights of the forest villagers on their land and community resource.

India’s electoral system first introduced the provision of NOTA in 2013 where in, the electronic voting machines carries, other than the name and symbols of the contesting candidates from various political parties, a NOTA button, to provide a choice to the electorate if they do not want to cast their votes in favour of candidates representing political parties. 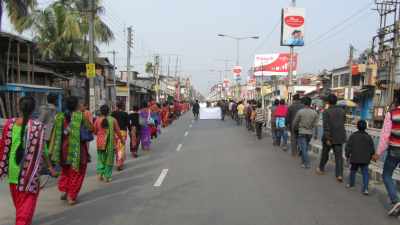 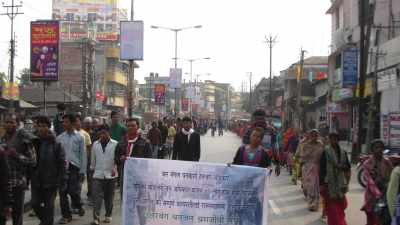 The Forest Rights Act which was passed by the Indian Parliament in December 2006 and enacted in January 2008, recognizes rights of forest dwellers on their land and community resources. The Act has specific provisions to confer and record their rights in order to undo the historic blunder that was committed during the British Colonial regime when the rights of forest dwellers were snatched and forest resources were appropriated by the State.

The forest villages and the communities residing in these villages are, historically, part of the enclave form of colonial forest management popularized and implemented by Dietrich Brandis, the German Forester, who served as the Inspector General of Forests in the Colonial Government.

According to Lal Singh Bhujel, the Convenor of Uttar Banga Bon-Jan Shramajibi Manch (North Bengal Forest People & Forest Workers Forum), spearheading the rights-movement of the forest villagers along with Himalayan Forest Villagers Organisation, “Since 2009, we are struggling for our legitimate rights, our Constitutional Rights, but the successive governments have not even bothered to fulfill their commitments. We have repeatedly raised this issue before the State Legislative elections in 2011, the Indian Parliamentary elections in 2014. All the political parties gave us assurances but nothing happened thereafter.” This time, we have, therefore, decided to use our votes in protest. Our people will snub these political parties by voting for NOTA, Lal Singh added.

With more than 150,000 voters from the forest villages, spread out in 14 constituencies, a large number of votes in favour of NOTA can change the electoral politics in North Bengal and that is why the political parties are feeling threatened, narrates Soumitra Ghosh, a senior social activist and documentary film maker.

“This is our forest; our families, for generations have regenerated and nurtured the forests. We were bonded labourers, never paid a paisa, but still we protect and conserve this forest. The political parties and the forest department have connived to deprive us of our rights to this forest. We are being harassed, arrested and beaten up for establishing our Gram Sabha (village council) as per the Act and exercising our rights”, said a visibly angry Sunder Singh Rava, a young tribal leader from the Kurmai forest village in the Chilapata forest division.[ The Chilapata forest villagers are currently participating in a global initiative to assess community conservation resilience facilitated by the Global Forest Coalition ]

Meanwhile, as the election day draws closer, the campaign for NOTA is gaining ground with village level meetings and marches across the region. Posters requesting the forest villagers to vote for NOTA and demanding the implementation of Forest Rights Act have come up and pamphlets are being distributed door to door.

A parallel electoral campaign of the forest communities in North Bengal to achieve their rights over their resources is creating a storm. A local news daily carried a headline screaming “The Terai and Duars are trembling from the Wrath of the NOTA”.