New Report: The State of Industrial Livestock in Asia and its Impacts on Deforestation and Livelihoods

Report: The State of Industrial Livestock Farming in Asia and its Impacts on Deforestation and People’s Livelihoods

Agriculture is by far the biggest driver of deforestation, according to the UN Food and Agriculture Organisation. And most of the world’s agricultural territory is dedicated not to growing the rice or potatoes that end up on your dinner plate or the bananas in your breakfast bowl, but rather to livestock farming, including grazing animals and growing the crops used to fatten them on industrial farms.

Nowhere has meat consumption surged faster than in Asia, where countries like China and Japan are leading the charge towards a diet much heavier in animal protein. This comes at the cost of forest ecosystems and wetlands in the Global South, disproportionally affecting local people, especially Indigenous communities, women, and children. The trend is expected to continue, bolstered by billions in investment in large-scale livestock and feedstock producers from big development banks and subsidies by governments – the same players that promise to tackle deforestation and climate change.

Addressing the climate and biodiversity crises the world faces today requires dramatic changes in the way we manage food production and the way we use land, and this will require bold decisions and policy coherence from governments. All communities and stakeholders – particularly women, Indigenous Peoples, and other marginalised groups – must be informed and vocal in the policy decisions affecting them and future generations.

Learn about Asia’s increasing appetite for meat and dairy and pathways towards a future free from intensive agriculture in our new report, The State of Industrial Livestock Farming in Asia and its Impacts on Deforestation and People’s Livelihoods.

This report shines a light on the realities of animal agriculture in Asia, a region that is crucial in the global fight to mitigate climate change and protect ecosystems from irreversible harm.

It was authored by Wen Bo, a noted Chinese environmentalist, and published by the Global Forest Coalition’s Campaign Against Unsustainable Livestock, with the generous support of funding organizations Misereor, SSNC, and Mobius. 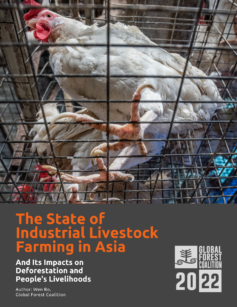