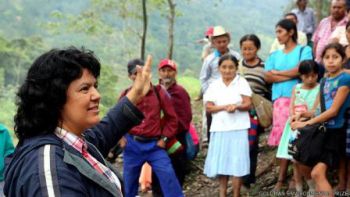 Berta Cáceres, indigenous leader and spokeperson for more than 20 years of the Civic Council of Popular and Inigenous Organizations of Honduras (Consejo Cívico de Organizaciones Populares e Indígenas de Honduras – Copinh), was murdered on March 3, while she was resting in her home in La Esperanza, Intibucá, about 188 km from Tegucigalpa, by “unknown” gunmen.

Berta Cáceres was a firm defender of small farmers and indigenous peoples’ rights and an inspiring social activist, both at regional and continental level, in defense of social and environmental justice, particularly against mining megaprojects and hydropower plants.

She had warned many times about Free Trade Agreements as part of the machinery of impunity of transnational corporations. Bertha committed her life to health, land, against patriarchism and violence. She opposed the political coup d’etat of June 28, 2009; COPINH denounced the coup as an instrument of violence serving transnational corporations to exploit resources and to repress the dissent of social movements. Berta also opposed US military bases on Lenca territory.

In April 2015, Berta Cáceres was awarded with Goldman prize, one of the most prestigious awards for environmental defenders. She was awarded for her hard work in defence of the Lenca territory against the Agua Zarca Hydropower Project of the Chinese transnational SINOHYDRO and national company Desarrollo Energético Sociedad Anónima (DESA).  Lenca people had been denouncing for years the violation by corporations, military and governmental actors of the human right to water as source of life and culture.

Berta Cáceres had children and was assigned precautionary measures by the Inter-American Commission of Human Rights (IACHR) which were not implemented by the state. Berta has been assassinated by a state which protects the interests of local capital and transnational corporations that have destroyed the territory. Berta’s commitment in favour of life, of those most in need, was the reason that several trials, investigations and threats were made against her.

The indigenous leader denounced many times death threats against her, and this was happening among a general violent context; 111 environmental activists in Honduras have been killed between 2002 and 2014, according to the 2014 report “¿Cuántos más?” of the ONG Global Witness. This makes Honduras the country with the highest rate of violence among the 17 countries analysed in the report. It also shows the architecture of impunity and violence of the large scale mining, of the hydroelectric business, among other activities in favour of private capital and complicit governments. According to the Honduras-based organization ACI-PARTICIPA (Asociación para la participación ciudadana en Honduras) more than 90% of assassinations and abuses in the country remain unpunished.

We firmly demand to the government of Honduras:

We express our solidarity and extend our condolences to the family and close friends of Berta Cáceres, to the Lenca people, and to the people of Honduras who suffer her irreparable loss.

Finally, we call for an international peoples’ mobilization and immediate denounce of Berta’s assassination to the embassies and consulates of Honduras in our respective countries, to express our repudiation of such crimes and our firm demand of justice.

[Please send your endorsement to: campaign@stopcorporateimpunity.org]

Link to the worldwide protests on the murder of Berta Cáceres