Indigenous Peoples and Allies Call for a Moratorium on REDD+ 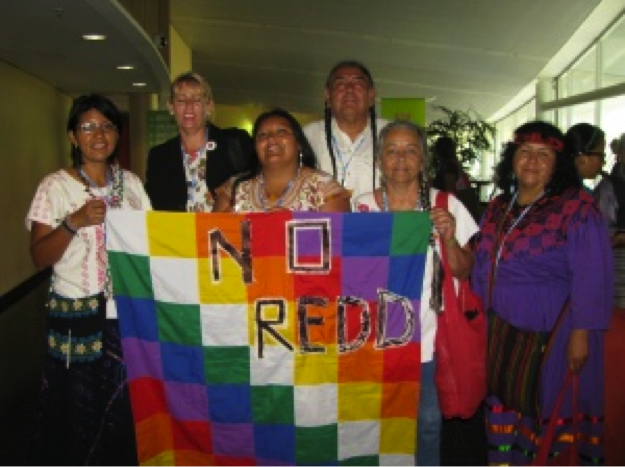 Berenice Sanchez, MesoAmerican Indigenous Womens BioDiversity Network, Mexico, said, “The supposed safeguards are voluntary, weak and hidden in the Annex. REDD+-type projects are already violating Indigenous Peoples’ rights throughout the world. We are here to demand an immediate moratorium to stop REDD+-related landgrabs and abuses because of REDD+.”

The President of the Ogiek Council of Elders of the Mau Forest of Kenya, Joseph K. Towett, said “We support the moratorium because anything that hurts our cousins, hurts us all.”

Marlon Santi, former President of the National Confederation of Indigenous Nationalities of Ecuador, said, “We are here to express our concern about the false solutions that have made a business out of climate change. For indigenous Peoples, the way of life we maintain in our territories is sacred. Therefore, we see carbon markets as a hypocrisy that will not detain global warming. With this moratorium, we alert our peoples about the risks that come with REDD+: threats against our rights and those of our Mother Earth, with the attempts to turn our lands and our forests into a waste-basket for carbon, while those responsible for the crisis continue reaping the benefits.”

“REDD+, in its readiness phase, has proved that it is not an effective tool for providing binding safeguards. We have seen the problems it causes and we take them extremely seriously,” said Tom Goldtooth of the Indigenous Environmental Network.

Basing their alert on the Precautionary Principle[1] and on serious concerns regarding human rights, Indigenous Peoples’ rights, and an increasing spate of reports citing the failure of REDD to protect forests or to mitigate the climate crisis, the Global Alliance of Indigenous Peoples and Local Communities against REDD and for Life calls for an immediate moratorium.

In addition, in the document released to the press today, they call for the United Nations Human Rights Council, the Office of the High  Commissioner on Human Rights, the United Nations Permanent Forum on Indigenous Issues, and other human rights organizations, to investigate and document violations from REDD+-type policies and projects, as well as to prepare reports, to issue recommendations and to establish precautionary measures and reparations to guarantee the implementation of the UN Declaration on the Rights of Indigenous Peoples, and other instruments and norms.