46th issue of Forest Cover, the newsletter of the Global Forest Coalition 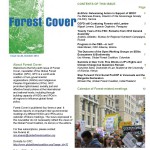 In this new issue of Forest Cover 46 you will find an interesting editorial on the views of civil society in the Pacific about the 3rd United Nations Small Islands Developing States (SIDS) Conference, followed by a report from former GFC’s chairperson Miguel Lovera who attended the Food and Agriculture Organization’s (FAO) Committee on Forestry (COFO) in Rome last June. Likewise, Anatoly Lebedev from Russia brings some insights on what the last FSC General Assembly was; Nele Marien, from the CBD Alliance based in Bolivia tells us a bit about the preparatory meetings leading to the CBD’s COP 12 which is currently happening in Pyeongchang. Then, after the final session of the Open Working Groups concluded in July in New York, Isis Alvarez brings us a brief analysis of the main outcomes especially in relation to Goal 15-Ecosystems & Biodiversity; Kanyinke Sena, IP representative to the New York Climate Week tells us about the World Conference of Indigenous Peoples which was held right at the same time as the Climate Summit in New York. Finally, Mriliani Rai (Tina) writes a report on the Climate Social Pre-COP, an event organized and sponsored by the Venezuelan government.