37th Issue of Forest Cover, the newsletter of the Global Forest Coalition 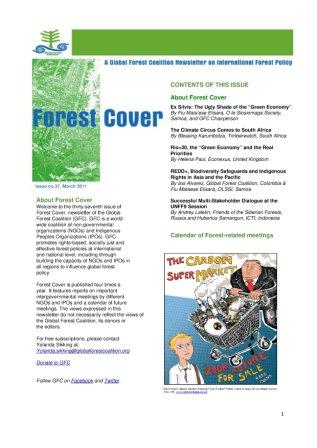 Latest version of the Global Forest Coalition Newsletter. Since the term ‘Green Economy’ seems to become increasingly popular, this edition includes an editorial on the ugly shade of the green economy, and a report on ‘Rio+20 the “Green Economy” and the Real Priorities”. Other articles deal with the next climate negotiations to be held in South Africa in December 2011, and a report on the Asia-Pacific Workshop on REDD+ and biodiversity & ILCs safeguards which was held in Singapour in March. Finally, there is a report on the UNFF9 held in New York, plus our usual calendar of upcoming forest-related meetings.

Forest Cover is available in two languages:
English / Español (available on the GFC website on 5 April 2011)