From 18 to 21 March 2019, 32 representatives of local community groups, women’s groups and NGOs gathered for a West African skillshare on gender-sensitive community-based forest conservation and restoration initiatives, and a strategy meeting on bioenergy developments. The event was was organised by the Global Forest Coalition, in collaboration with the Swedish Society for Nature Conservation, the American Jewish World Service and les Amis de la Terre-Togo. On 21 March 2019, the participants agreed on the following press statement. 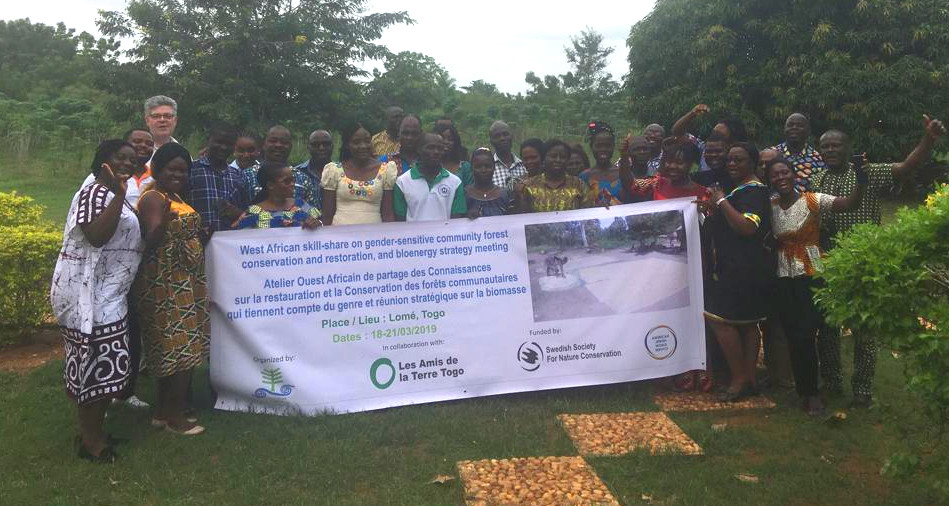 Whereas the United Nations General Assembly has declared 21st of March of every year as International Day of Forests, it calls to mind the significant role forests play in human and environmental well-being.

Considering that forests cover a third of the land providing vital organic infrastructure for life on earth, support countless species as well as the livelihood of billions of people particularly local communities and indigenous peoples whose survival depend on it.
Recognizing, Africa a home to rich and unique biodiversity, where local people are more dependent on forests for their livelihoods, in addition to timber, forests supply food, fuel wood, medicine, building poles and dry season grazing.

Realizing that in spite of the known facts about the benefits of forests, human activities continue to undermine the protection and management of forest thereby increasing forest loss and degradation.

Noting that, Africa faces the worst situation of forest and biodiversity loss due to the use of biomass energy, land grab for extractive industries, mechanized agriculture as well as monoculture plantation expansion with negative impact on the local communities particularly women. In many respects women continuously suffer a range of challenges undermining their active participation in forest conservation and governance. The inadequate knowledge of women about their roles in forest governance and conservation as well as their rights to participation remains a challenge.

Additionally, many of the proposed mainstream solutions to overcome the global challenges affecting forest including climate crisis and deforestation (e.g REDD) led from outside only make matters worse. Communities, especially women, end up becoming even more desperate after the implementation of such solutions limiting community access and control over their lands and territories and exacerbating poverty.

We call upon governments to comply with existing international agreements like the Sustainable Development Goal target to halt deforestation and forest degradation by 2020, and agreements to protect the rights of Indigenous Peoples, communities and women. Truly, effective solutions such as community-led conservation initiatives need to be scaled up. Building local movements and solidarity are key elements of community conservation. The building of local movements allows communities to share their experiences from the implementation of their traditional knowledge and practices. Educating the public on the necessity for a sustainable management of natural resources is no doubt one of the solutions for successful conservation of forests. Thus investing in forest education will help achieve more in terms of bringing understanding and awareness on the importance of community-led forest conservation.

On the other hand, indigenous peoples and their way of life have conserved the global environment for millennia and their philosophies and methods should be respected, adopted and promoted if climate change mitigation is to be successful.