The Women’s Major Group (WMG), representing 200 civil society women’s organizations from all around the world, is greatly disappointed in the results of the Rio+20 conference. We believe that the governments of the world have failed both women and future generations. 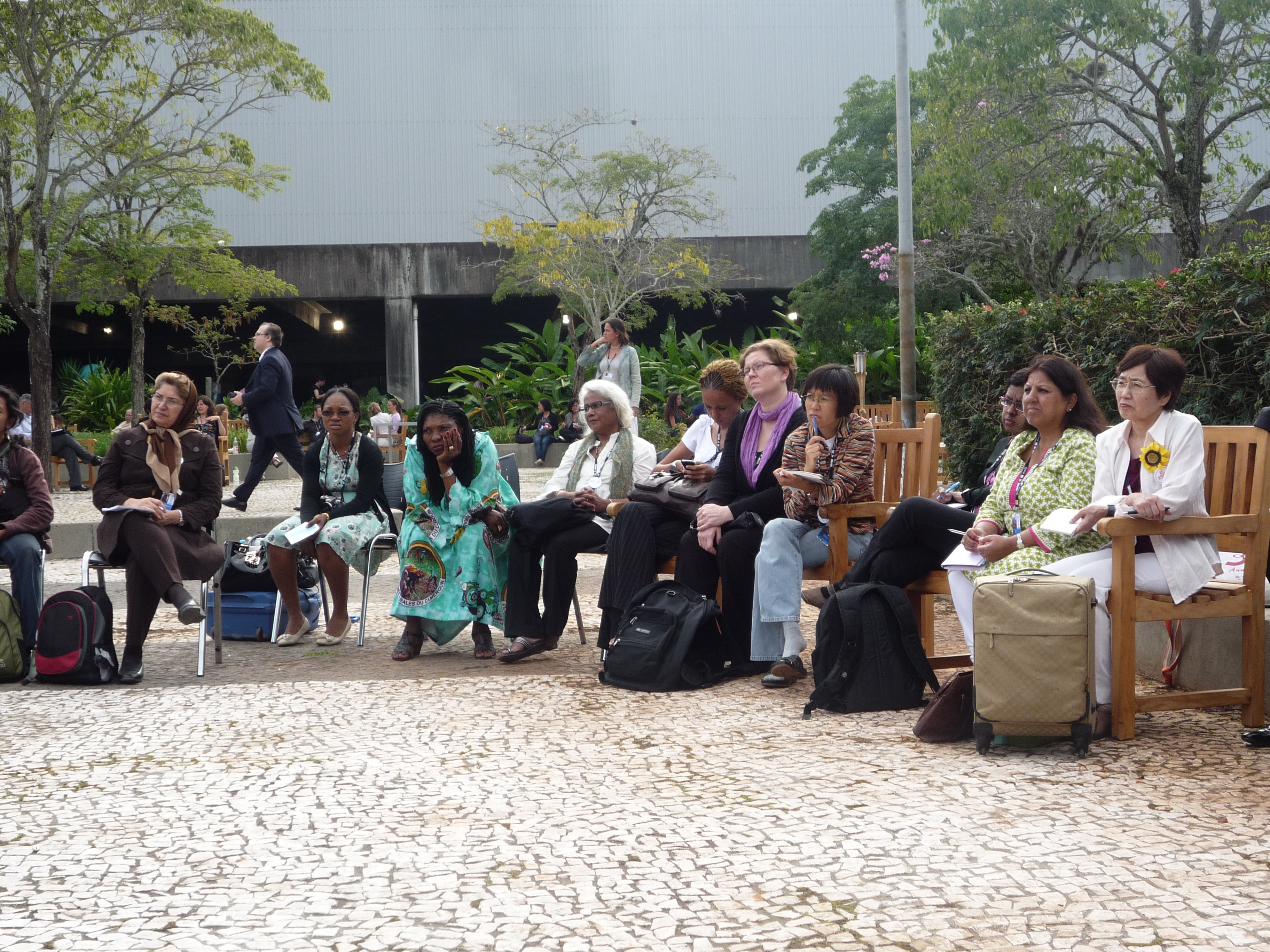 Two years of negotiations have culminated in a Rio+20 outcome that makes almost no progress for women’s rights and rights of future generations in sustainable development. The Women’s Major Group has worked around the clock to maintain women’s rights and commitments to gender equality that have already been agreed to, but gaining affirmation of those rights left no time for real progress and commitments to moving toward the future we need.

While we have heard that the Rio +20 Conference was not a bilateral process but a multilateral one, it is unacceptable that our reproductive rights agreed upon nearly 20 years ago were renegotiated and not reaffirmed in the final outcome document. We are, however, pleased with the reaffirmation of the ICPD and the Beijing Platform for Action as well as their subsequent review outcomes. In particular, as we prepare for ICPD +20, Beijing + 20, the MDGs +15, the SDGs processes and the post-2015 development agenda, we urge governments worldwide to reaffirm these commitments to gender equality, and in particular, sexual and reproductive health and rights, so that all women and men, adolescents and youth can live their lives to their fullest potential.

Nor were there strong commitments to women’s rights to land, property and inheritance. Not only from a human rights perspective, but also from an economic perspective, excluding half of the world’s population from access to resources is utterly foolish. Several heads of state also criticized these grave omissions in the text, and the Prime Minister of Norway commented that in the case of Norway, the share of GDP generated by women exceeds national income from oil revenue.

No Right to a Healthy Environment.

Thousands of peoples’ right to a healthy environment are being disrespected. The Women’s Major Group is dismayed and alarmed that there is no reference to radioactive pollution and its devastating impact on our health and our environment, including rivers, aquifers, food and air. The Rio+20 outcome document should have recognized the unacceptable risk of nuclear pollution and the high cost of nuclear energy. The Women’s Major Group stands in solidarity with the women’s organizations from Japan present here in Rio who are calling for an immediate shut down of nuclear power! We also note with dismay that the text on mining highlights the interests and profiteering of the mining companies rather than advocating for a healthy environment for women, their communities, and indigenous peoples.

Further, the critical connection between climate change and gender is not mentioned at all. This is unacceptable and contrary to women’s daily experiences. Women, children, indigenous peoples and the impoverished (the majority of whom are women) are the most heavily impacted by increasingly dire consequences of climate change. Equally critical is the huge potential contribution to climate mitigation and adaptation that could be made by women, yet their essential role in leading and participating in desperately needed climate solutions is not mentioned.

In many countries of the world women produce up to 80% of the food, cultivating lands that they do not own, gathering food from forests to which they have no entitlements. The rush for resources to fuel our unsustainable development with minerals and biofuels has already evicted great numbers of women from the lands they have cultivated and protected over millennia. Women call for an immediate halt to land-grabbing! We cannot put women’s food production in competition with biofuels, Genetically Modified Organisms (GMOs) and agro-industrial corporations – the Monsantos of this world. We are very disappointed that there are no clear steps outlined for a moratorium on GMOs and more broadly that there are no concrete measures to assure women’s right to access to and control of the natural resources that are the basis of their livelihoods, in particular the mining section does not assure rights of impacted communities.

Women are disappointed that the Rio+20 outcome document does not clearly ensure free, prior and informed consent for all communities impacted by so called “Green Economy” investments. Women demand “no-go zones” for mining, agrofuel and forestry companies. In order to ensure that women, indigenous peoples and local communities have access and control over water resources, women call for no privatization of water sources. We believe that a “green economy” will be no more than “green washing” if it is not firmly planted in a legally binding implementation of the precautionary principle.

The Rio+20 outcome document does not give governments the urgently necessary framework to shift financial resources away from unsustainable and inequitable energy systems to necessary investments in decentralized renewable energy systems. In the Global South, investments should be prioritized for access to safe and clean energy in rural areas with a focus on women and household energy consumption. The Women’s Major Group regrets that there are no clear commitments on this matter.

Women are also very concerned about the increased focus on private financing, and the decrease of public revenue for sustainable development. We also regret that there is no commitment for new financial mechanisms such as the Financial Transaction Tax. Women call for the elimination of subsidies, including indirect subsidies that harm ecosystems and local communities, within, for example, the nuclear and fossil fuel industries. We are, however, pleased with the agreement to address illicit financial flows, it is about time that the billions in illegal tax-paradises are regulated and made to contribute to sustainable development and poverty eradication.

The only concrete new decisions taken at Rio+20 are to establish two new intergovernmental processes, one on Sustainable Development Goals (SDGs) and another on Financial Mechanisms. A committee of 33 experts will be created for the SDG process. Women call for a seat for a representative of civil society’s women’s organizations on the expert panel for the SDGs. In addition, we call on the Secretary General to ensure gender balance in the composition of the panel.

Finally, Rio+20 has not established stronger governance for sustainable development, and we regret in particular the deletion of the proposed high commissioner for future generations.

At Rio+20, governments had a historic chance to take bold steps to end poverty and environmental destruction, to protect the rights of the most vulnerable members of our societies, to take concrete measures to fully implement women’s rights and women’s leadership. We now risk increased poverty, inequities and irreversible environmental damage. This is not the future we want, nor the future we need.

The Women’s Major Group (WMG), comprised of over 200 organizations, is facilitated by three Organizing Partners – Women in Europe for a Common Future (WECF), Voices of African Mothers (VAM), and Development Alternatives with Women for a New Era (DAWN). It is supported by core members including, the International Network on Gender and Sustainable Energy (ENERGIA), Global Forest Coalition, and Women’s Environment Development Organization (WEDO).

Sascha Gabizon, Women in Europe for a Common Future (WECF)