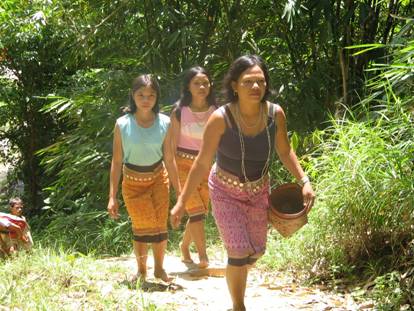 Women, Market Mechanisms and the Environment

Women form 70% of the world’s poor. Due to the fact that they spend a lot of their time on unpaid household and caretaking activities, and because they are still discriminated against in terms of pay and labor conditions, women’s estimated earned income in comparison to men is 57% in industrialized countries, 40% in Latin America and South Asia and just 30% in the Middle East and North Africa.

Women also own far less land than men, partly because they are excluded from inheritance in many traditional legal systems. Even in a country like Brazil, where they are not formally discriminated against in a legal sense, they still only own 11% of private land.

In some traditional cultures in other parts of the world, married women cannot own their own land and property at all. Because of this, they have less money and fewer capital assets. They are thus disadvantaged in market economies.

The conventional development response has been to try to adapt and integrate women into the market economy. But whilst efforts such as micro-financing schemes are well-intended, they have not been able to solve the fundamental inequities that persist.

Women start off at a disadvantage in an increasingly competitive society, in part as a consequence of their reproductive roles, which cause them to spend more time on unpaid labor than men. There has been little or no interest in trying to adapt mainstream economies to the needs of women (for example, by promoting policies that recognize the economic value of women’s unpaid labor in the household.)

Incorporating biodiversity into a market economy puts these women at a severe disadvantage. It makes them and their families more dependent upon the income of their husbands, and, in the worst cases, deprives them of essential resources that provide them with a nutritionally diverse diet, primary health care and energy. It is women who suffer most when areas are declared ‘protected’, or when they suddenly have to pay for resources like clean freshwater and fuelwood, which used to be available for free.

Women do not only lose out as ‘buyers’ of ‘environmental services’, they also lose out as ‘sellers’. Most market-based conservation mechanisms consider land ownership to be the most important criterion when biodiversity values are privatized and distributed to individual ‘owners’ in order to be sold. Because women have far less formal land title than men, they are disadvantaged when it comes to establishing a right to ‘sell’ biodiversity values.

Even those systems that try to reward the people who are actually managing a resource, rather than the formal owners of the land, often underestimate the disadvantageous position that women have when money is at stake. Forests or other resources, for example, which were traditionally managed by women, may suddenly be taken over by the men in a village when it turns out that there is money to be earned through a payment for environmental services system.

Selling ’environmental services’ can also lead to serious local governance problems if it is not clear whether the leader of a village has the right or the mandate to undertake certain legal transactions. Women are again likely to suffer most, as their rights and interests are more likely to be overlooked in commercial transactions normally closed by men.

Likewise, it is often women who possess valuable traditional knowledge related to biodiversity, while a small group of male elders may be mandated to negotiate on behalf of the community when a potentially profitable Access and Benefit Sharing contract is in sight.

In a country like Paraguay, for example, only 1% of the population owns 80% of the land. Women are in an even more disadvantageous position. They own only 27% of the private land. Even when they have title over the land, it is not easy for them to compete in a truly competitive market, which requires economies of scale: women seldom manage large projects or own large pieces of land.

Furthermore, many women lack marketing skills. Women have, on average, lower levels of formal education than men. Despite significant progress since 2000, there are still more boys than girls enrolled in school in developing countries, and illiteracy amongst older generations of women is still astonishingly high (28%).

The relationship between rural poverty and education is linear and most Indigenous women speak a native, non-official language, putting them at a severe disadvantage. Of course there are exceptions where successful Indigenous and non-Indigenous women have been able to sell carbon offsets or other ‘environmental services’ but overall it is fair to say that there is no level playing field in these markets.

The market could become even more inequitable if some of the proposals to compensate countries, communities and/or individuals for Reducing Emissions from Deforestation in Developing countries (REDD), which are currently on the negotiating table within UNFCCC, are accepted.

There is a major conflict between effectiveness and equity in such proposals. As women are seldom involved in projects that cause a lot of deforestation, the most effective payments to reduce deforestation are unlikely to target women. Instead they will probably focus on those actors who are responsible for significant levels of deforestation and can be convinced, through a relatively minor compensation, to refrain from further deforestation.

Yet the most successful forest conservation experiences can be found on recognized Indigenous lands and territories. The promotion of these communities’ right over their territories, as enshrined in the UN Declaration on the Rights of Indigenous Peoples, is thus critical to the implementation of effective and equitable biodiversity conservation policies. The Declaration needs to be put into practice.

Women’s involvement in these successes, along with their fundamental role in saving seeds, nurturing trees and other forms of biodiversity management, needs to be properly and effectively acknowledged. In this respect, there is a clear need to ensure the effective enforcement of the UN Convention for the Elimination of All forms of Discrimination Against Women (CEDAW), including through:

Please refer to The Impacts of Market-Based Conservation Mechanisms on Women for further details.

Go to: a short guide to CEDAW – Convention on the Elimination of all Forms of Discrimination against Women