Protected Areas as a Threat to the Sustainable Development Goals

When we were preparing the capacity building workshop for the Community Conservation Resilience Initiative in Nepal, which took place on 24 and 25 June in Kathmandu, we were aware we would find a country with a profound experience of community conservation and restoration. There are few countries in the world that provide such a vivid, inspiring example of the power of community conservation. But it was still impressive to hear about and see the amazing efforts the people of this formally Least Developed yet culturally and socially rich country have undertaken to recover their natural heritage.

The Nepalese model of community forest governance is first of all build on the strong sense of community and social collaboration. At the heart of its success was the establishment of 18000 Forest User Groups managing almost 2 million hectares who subsequently joined their forces in the Federation of Community Forest User Groups Nepal (FECOFUN). No less than 33 % of the entire Nepalese population is involved in these Forest User Groups.Their community efforts have created a sustainable model of forest conservation, restoration and use that succeeded to halt forest degradation and deforestation, which was still rampant in the period up to the 1990’s.

Community forest governance in Nepal does not only play an essential role in enhancing the climate resilience of this mountainous and highly landslide-prone country, but it also contributes significantly to a broad range of Sustainable Development Goals (SDGs), including SDG 1 on poverty eradication, SDG 2 on ending hunger and promoting sustainable agriculture, SDG 5 on empowering women (who play a key role in community forest governance), SDG 6 on access to clean water, SDG 7 on access to sustainable energy, SDG 8 on decent work, SDG 10 on reducing inequalities, SDG 12 on sustainable consumption and production, SDG 13 on climate change, and of course SDG 15 on conserving biodiversity, including mountain biodiversity, and halting deforestation by 2020.

Regretfully, despite the tangible success of this conservation model, which is theoretically recognized by the Nepalese Government, the official biodiversity policies of Nepal fail to provide effective support to community forest governance. Despite the resounding success of community conservation, the policy still puts a strong emphasis on conventional protected areas and protected forests establishment. Both representatives of the Forest User Groups and the representatives of the Network for Indigenous Peoples in Nepal who attended the workshop reported how new and existing protected areas and protected forests establishment and management infringed on the user rights of forest-dependent and other biodiversity-dependent communities. By blocking access and denying user rights conventional protected areas do not only frustrate a conservation model that has proven to be successful, but they also cause significant harm to the livelihood strategies of these communities.

In this light it is rather cynical that the SDG process has adopted protected areas coverage as one of the potential indicators of the success of its implementation. The positive impact of convential protected areas/protected forests on sustainable development is highly questionable. By limiting options for sustainable use by local communities, they often frustrate the implementation of the SDGs related to food, water, energy, sustainable production and reducing inequalities. They even hamper the effective implementation of SDG 15, as community governance and the recognition of the rights of Indigenous peoples and local communities to use and conserve their own territory or area has proven to be a highly effective way to conserve biodiversity. The role of community conservation has been explicitly recognized by the Parties to the Convention on Biological Diversity, as well as numerous researchers. Precisely for that reason, a growing number of scientists and social movements is calling for the adoption of “effectively conserved areas” or simply “conserved areas” rather than protected areas as the appropriate indicator for biodiversity conservation. That also avoids including the world’s numerous paper parks, which are often facing challenges with illegal exploitation precisely because there is no support by local populations for the protected area and its management. 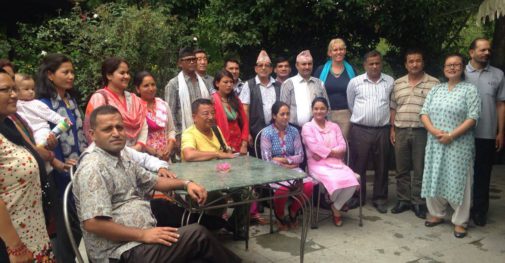 It is high time countries stop expanding convential protected areas and protected forests and take serious measures to support small-scale and large-scale community conservation initiatives instead, including the impressive effort one third of the Nepalese people has made to conserve and restore their precious forests. These participatory approaches are inspiring examples of how biodiversity conservation can indeed contribute to sustainable livelihoods on the ground, and national sustainable development goals like enhanced resilience. The CCRI process in Nepal is expected to come up with concrete recommendations by the communities themselves of the kind of support and policy changes that are needed in this respect. Let us hope the Governments who have expressed formal support for community conservation and the SDGs will be willing to take these recommendations serious.

*Simone Lovera is the Executive Director of Global Forest Coalition