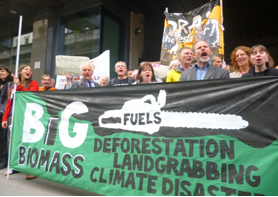 In May 2010, the Global Forest Coalition warned in its report “Wood-based Bioenergy: The Green Lie”: “The demand for industrial wood bio-energy is causing large areas, especially in the South, to be taken over by monoculture tree plantations to serve the interests of the North.” The expansion of tree plantations in the South would, the report predicted, be both a direct and an indirect impact of the EU’s massive rush to burn ever more wood in power stations.

So, three years on, has the prediction come true? New investments in African and South American tree plantations to produce woodchips and pellets for Europe continue to be announced and different European energy companies have been looking at sourcing from both regions. For example, in the UK plans to import woodchips and pellets from teak plantations in Ghana have been announced[1] and, one energy company, MGT Power, has signed a Memorandum of Understanding with the Brazilian pulp and paper and tree plantations company Suzano Papel e Celulose[2].  No doubt there will be quite a few more such investments or plans. And it is important to remember that Europe’s biomass expansion is still in the early stages – far more biomass power station capacity is in the pipeline than has been built so far.

But, contrary to what most people had expected three years ago, the really big investments that are going into biomass exports to European power stations are primarily going into pellet plants and docks in the US and Canada.  They are not so far going into such plants in Brazil, Ghana or anywhere else in the global South.  The impacts on North American forests are already severe and the two main sourcing regions – the southern US and British Columbia – are regions with large-scale clearcutting of biodiverse and carbon rich forests.  In the southern US, most forests have already been destroyed to make way for monoculture pine plantations for pulp and paper.  That trend can only get worse with the new demand for biomass.

Given that the southern US has been the world’s single biggest pulp and paper producing region, the indirect impacts on the global South will undoubtedly be as severe as our 2010 report had predicted.  Pellet production in North America has already increased from 5 to over 11 million tonnes since 2009 and European energy firms are looking for tens of millions more tonnes[3]. Even with much increased logging, it seems inconceivable that this would not result in far less wood for paper from that region – and thus in far greater demand for pulp and paper plantations in the global South.

Nonetheless, given that trees grow fastest and wood is commonly cheaper in the global South, it seems curious that European energy firms have been turning primarily to North America.  A recent Freedom of Information request by Biofuelwatch to the British government[4] explains this puzzle:

For obvious reasons, energy companies are not keen on saying that they will burn wood from whole trees, especially from ones that take many decades to grow.  Anyone can see that burning an 80-year old tree within minutes is not the way to reduce carbon emissions.  Companies thus prefer to speak about ‘energy crops’ (namely fast growing plantations of miscanthus or poplar, though relatively few of those exist in Europe so far), waste wood, straw and sawmill residues.  Those tend to sound more acceptable to journalists but, as the documents obtained show, energy companies may not actually be able to burn them.

And here is why: The biggest biomass plans announced by European energy companies (such as Drax, E.On, RWE and GDF Suez) to date are plans to (partly or fully) convert coal power stations to burning biomass and plans to co-fire large amounts of biomass with coal.  Those are old power stations built for burning coal and burning coal is chemically very different from biomass.  Burning biomass releases chemicals (alkali salts) that corrode, i.e. ultimately destroy, the boilers.  The only type of biomass found to not be too corrosive for those power stations is pellets made from wood from slow growing trees with little bark.  They simply cannot burn eucalyptus, nor miscanthus, nor straw, nor fast-growing trees in general, nor too much bark (which means, most sawmill residues)[5].

This does not apply to new power stations built to burn biomass.  Many of those can burn any type of wood and other biomass.  Indeed, if the largest energy companies are looking to North America for tens of millions of tonnes of pellets, developers of new power stations are even more likely to try and get their woodchips or pellets from other regions.  The scale of plantation expansion for woodchips and pellets in the South will thus depend on choices made by European governments and investors whether they want to support burning more wood in coal power stations or in new biomass plants.  Either way, the result will be a lot more plantations in South America, Africa and elsewhere – either to supply European power stations or to feed new pulp mills as ever more in the North will close.

[5] Please note that this industry is working to develop a technology that, if successful, would make other types of wood and pellets compatible with coal power stations.  This is called ‘torrefaction’ but it is only in the research and development stages, is very expensive and very energy intensive.  Whether it will ever be commercialised cannot be predicted.