22 April, 2016: On the occasion of Earth Day, the Global Forest Coalition (GFC) [1] released a new briefing paper titled “Mainstreaming Biodiversity and the Resilience of Community Conservation”[2] ahead of the United Nations Convention on Biological Diversity (CBD)[3] meetings to be held from 25 April to 6 May 2016 in Montréal, Canada [4]. The paper calls out to national governments to include indigenous peoples and local community conserved territories and areas (ICCAs) and other community conservation initiatives as a key strategy to achieve biodiversity mainstreaming. State Parties are mandated by the CBD to mainstream the conservation and sustainable use of biodiversity into, for example, the primary sectors of agriculture, forests and fisheries [5].

The briefing paper is based on the findings of the first year of the Community Conservation Resilience Initiative [6], which has facilitated participatory assessments of the resilience of community conservation by more than 30 communities in 10 countries. They show that in practice, biodiversity can be mainstreamed at the local level through rights-based approaches that benefit both nature and peoples’ livelihoods. “There are countless examples of customary practices through which communities conserve biodiversity. In agriculture, they conserve traditional crops and livestock varieties, while in fisheries they may have traditional no-take zones and time periods such as taboos in Samoa and the Solomon Islands. Their rights over their territories need to be ensured so they can strengthen their resilience,” said Mrinalini Rai, the Indigenous Peoples and Gender Advisor of GFC. 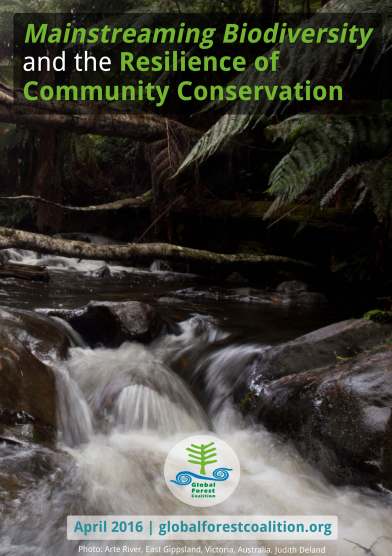 The briefing paper also highlights threats such as large-scale industrial fishing operations that undermine coastal community livelihoods, commercial monoculture plantations that replace diverse forests and undercut forest peoples’ livelihoods and ‘Green Revolution’ agricultural practices that negatively impact traditional agricultural systems. “We welcome the growing support for ICCAs and community conservation from governments, donors and civil society but this support remains rather modest compared to the subsidies and other perverse incentives granted to unsustainable forms of agriculture, forestry and fisheries,” highlights Alejandro Diego Cardona, chairperson of GFC. “We strongly urge governments to phase out such subsidies, in line with the CBD Aichi Targets [7].”

Market-based and private sector-led approaches to mainstreaming biodiversity such as certification schemes are gaining popularity, but GFC advises against this tendency. “These approaches don’t reduce overall production or consumption levels and are fuelled by the very commercial interests that are the root causes of biodiversity loss. We often hear about the “business case” for biodiversity, but we should instead focus on the “livelihood case” for biodiversity,” said Mary Lou Malig, the Campaigns Coordinator of GFC.

The briefing paper sets out a number of recommendations, for example, the need to appropriately recognize and support ICCAs and other community conservation initiatives, including customary laws. More broadly, it asks for effective enforcement of environmental regulations, policy coherence and institutional coordination across ministries and sectors.

Notes
[1] Global Forest Coalition is a worldwide coalition of almost 80 NGOs and Indigenous peoples’ organizations from 53 different countries striving for rights-based, socially just forest conservation policies. Link: https://globalforestcoalition.org/media
[2] See more in our new briefing paper: “Mainstreaming Biodiversity and the Resilience of Community Conservation”: https://globalforestcoalition.org/wp-content/uploads/2016/04/mainstreaming-biodiversity-paper.pdf
[3] The Convention on Biological Diversity (CBD) is a multilateral environmental treaty, currently with 196 State Parties. Its objectives are the conservation of biological diversity, the sustainable use of its components and the fair and equitable sharing of the benefits arising out of the utilization of genetic resources. Link: https://www.cbd.int/intro/default.shtml
[4] The twentieth meeting of the Subsidiary Body on Scientific, Technical and Technological Advice (SBSTTA-20) of the CBD is taking place from 25-30 April 2016 in Montréal, Canada. The first meeting of the Subsidiary Body on Implementation (SBI-1) is taking place from 2-6 May 2016 in Montréal, Canada.
[5] As guided by the CBD Strategic Plan for Biodiversity 2011-2020 and Aichi Targets.
[6] The Community Conservation Resilience Initiative (CCRI) is a joint effort of a large number of indigenous peoples’ organizations (IPOs), women’s groups and NGOs and coordinated by the Global Forest Coalition, who are carrying out bottom-up assessments of community-led conservation efforts in communities across at least 20 countries. The CCRI aims to contribute to the implementation of the CBD’s Strategic Plan for Biodiversity 2011-2020 by providing advice on the most effective and appropriate forms of support for community conservation. See: http://bit.ly/1SwrcBl
[7] The Aichi Biodiversity Targets (Aichi Targets), which are included in the CBD’s Strategic Plan for Biodiversity 2011–2020, are organized under five Strategic Goals, and twenty Targets. They provide coherent guidance on how to achieve the Strategic Plan to conserve biodiversity for the time period 2011-2020. Link: https://www.cbd.int/sp/targets/