Manila, PHILIPPINES – In a joint statement today, the Asian Peasant Coalition (APC), the Kilusang Magbubukid ng Pilipinas (KMP) and the Danggayan dagiti Mannalon ti Isabela (DAGAMI-Isabela), said that because of the farmers’ militant actions the Bio-ethanol plant was victoriously shut down in San Mariano town in the province of Isabela in northeastern Philippines.

At the forefront of the bio-ethanol project is Green Future Innovations Inc. that put up a 54– million liter ethanol plant in San Mariano amounting to $120 million dollars. The bio-ethanol plant used sugarcane as feedstock sourced from 6,000-hectare farmlands now converted into a nursery in San Mariano and Delfin Albano towns in Isabela. The Green Future Innovations (GFII) is a venture between Japanese companies Itochu Corp. and JGC Corp. Joining them are Philippine Bioethanol and Energy Investments Corp. and GCO, a holding company from Taiwan.

“The farmers’ militant struggle against land grabbing and bioethanol plant which was led by KMP and DAGAMI resulted in favor of the farmers and the people of Isabela. On August 2, the bio-ethanol plant was shut down. When the bioethanol plant started its operation on May 2012 it polluted the air, produced unpleasant smell and it released its toxic waste in the surrounding farmlands and Pinacanauan River causing sickness among the residents and successive fish kills in Barangay (village) Lucban in Benito Soliven town,” remarked Cita Managuelod, Executive Director of the Sentro para sa Tunay na Repormang Agraryo (Center for Genuine Agrarian Reform) or SENTRA-Cagayan Valley.

Managuelod is one of the speakers during the National Conference on Food Security held on August 29 to 30 at the University of the Philippines in Diliman, Quezon City. The conference is sponsored by the Philippine Network of Food Security Programmes Inc. (PNFSP) with the theme “ Ensure Our Food, Strengthen Our Agriculture, Secure Our Future!.

Wilfredo Marbella, KMP deputy secretary general stated, “during DAGAMI’s rally in front of the office of the EcoFuel Land Development Inc. on August 7, the farmers and indigenous people demanded that the EcoFuel should immediately vacate their lands. Those lands are the primary source of livelihood for farmers and their families, providing harvests of vegetables, bananas, pineapples, indigenous rice crops, and corn varieties.” The KMP leader added, “the beneficiaries of the Comprehensive Agrarian Reform Program (CARP), Indigenous Peoples with claims to ancestral domain, and land patent holders, were displaced by the sugarcane plantations. Most of [those with] certificates of land ownership awards are facing foreclosure by Land Bank..”

Bioethanol plant operating without a permit

Managuelod stressed, “ that the GFII and the EcoFuel admitted during a closed door meeting with the DAGAMI leaders on July 26, 2012, that both companies are still at a loss on how to solve the unpleasant smell which has already reached the town center, public market and other populated areas nearby the bioethanol plant. The GFII also said that they do not have the required technology to solve these environment and health related concerns.”

“Worst, we’ve found out that the bioethanol plant has been operating without a permit from the Environmental Management Bureau (EMB). The company violated Republic Act (RA) 8749 otherwise known as the Philippine Clean Air Act of 1999 which states that all sources of air pollution subject to the Implementing Rules and Regulation must have a valid permit to operate issued by the EMB Regional Director,” stated Diony Yadao, DAGAMI-Isabela Chairperson.

The farmer leader added, “The GFII also violated Rule 27.1 of the Philippine Clean Water Act of 2004 which states that discharge permit must be secured for operating facilities that discharge regulated water pollutants.” Both KMP and DAGAMI leader remarked, “we hold the landlord President liable for the sufferings faced by the farmers and the people of Isabela brought by the land grabbing and bioethanol project. President Aquino stated that capital infusion for the bio-ethanol plant was one of his good news” from his 2010 Japan visit.”

“This is also a success of the struggling peasants in Asia. Though we believe that this is just an initial victory, we were inspired to continue our struggle against land grabbing, land-use conversion, militarization and imperialist globalization. We call on all APC members to continue its militant assertion of their rights to land and to heighten its campaign for genuine agrarian reform.,” stated Rahmat Ajiguna, APC deputy secretary general.

“We congratulate the KMP and DAGAMI for leading the struggle against land grabbing and the bioethanol project in Isabela. We thank all other local and national organizations who supported their struggle. We express our gratitude to the office of Rep. Rafael Mariano (Anakpawis Partylist) for helping KMP and DAGAMI and for bringing the issue at the House of Representatives. We are grateful to the international groups, especially the Peoples Coalition on Food Sovereignty (PFCS), Friends of the Earth (FOE-Japan), IBON International, Action Solidarite Tiers Monde (ASTM), International League of Peoples Struggle (ILPS), and all other groups for their help. Finally, to the United Nations (UN) Special Rapporteur on the right to food, Olivier De Schutter, and the UN Special Rapporteur on the rights of indigenous peoples, James Anaya, for their statement raising alarms on the rapidly expanding agrofuel plantations in South-East Asia,” ended Rahmat. # 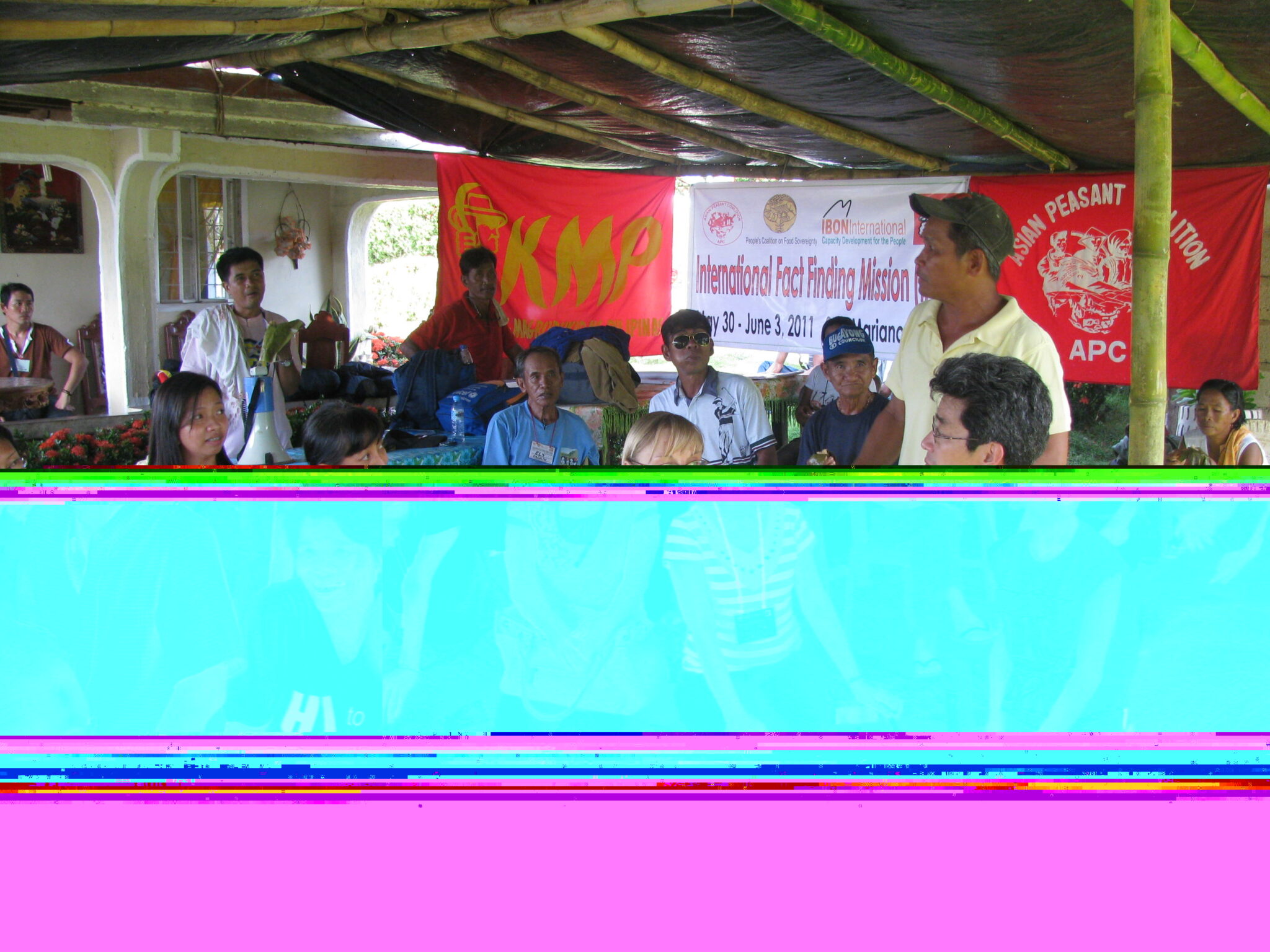