Webinar: The Role of Development Banks in Big Livestock & Impacts on People & Forests

Register now to join this webinar!

Development banks play an outsized role in supporting the industrial livestock industry around the world, which is a major cause of greenhouse gas emissions, biodiversity loss, deforestation, water depletion, and air and water contamination. This industry does the most harm to women, low-income communities, and Indigenous peoples. Intensive livestock production also causes tremendous animal suffering and increases the risk of antibiotic resistance and new pandemics.

Under the guise of “development,” the public banks are financing giant meat companies like Minerva and Smithfield. In the past 10 years, the top five development banks have poured a staggering $4.5 billion into big meat companies in Brazil, Ecuador, Mexico, China, Vietnam, and Kenya. The World Bank’s International Finance Corporation (IFC) is the largest public investor in the industrial livestock sector, having sunk more than $2.2 billion into giant livestock corporations globally. The fastest-growing investor in this sector is the Inter-American Development Bank (IDB), which has provided $500m annually since 2018.

The banks claim that investments in factory farming fuel job creation and help feed the world, but in reality, these loans drive climate change and biodiversity loss, heighten consolidation, undermine food sovereignty, destroy the livelihoods of small farmers and Indigenous people, and cause animal suffering.

We invite you to join our efforts to #StopFundingFactoryFarming and promote better engagement among partners in the Global South to ensure their voices are adequately reflected in this campaign. That information shared by the campaign seeks to allow effective participation in all of the activities we aim to achieve.

Register to join and please share this with your networks! tiny.cc/livestockbanks 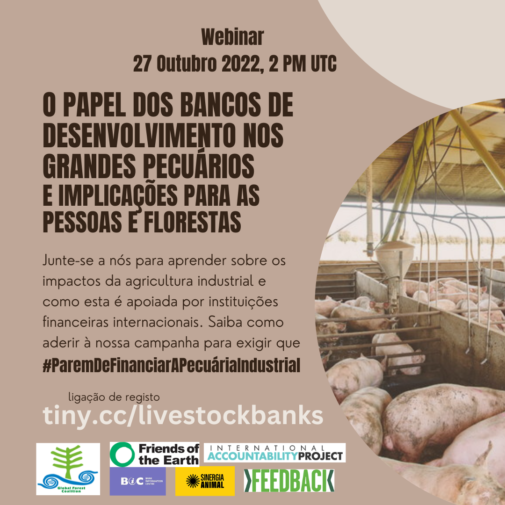