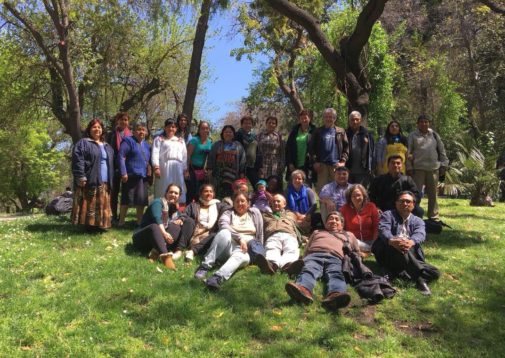 The Global Forest Coalition held its first Latin American CCRI skillshare 4-5 October. Almost all of its Latin American members attended, as well as some guests, with experiences from CCRI projects being presented. The meetings provided a good space for participants to listen to each other and identify common ground. Different key areas were identified for collaborative regional work, and areas where campaigns could be strengthened were also considered. The skillshare provided an important place for regional members to meet each other, exchange knowledge and experiences, and work towards consolidating a regional network.

The first Latin American media training for the Women2030 project was held 6-8 October 2017. The main objective of the training was to provide Women2030 participants in the region with communication tools that help them to strengthen their organisations’ campaigns, and to empower them to replicate the training in their own communities. There were a diverse range of skills and experience levels amongst participants, and there were some very positive outcomes from the workshop. A full report of these activities will be made available soon to GFC members.

The 1st International Seminar on “Latin American Women in Biodiversity Conservation” was held at the University of Chile on 3 October 2017, and over 50 people participated in it. Panelists from all over Latin America included women from Chile, Colombia, Mexico, Brazil, Paraguay, Panama and Bolivia. They described their different experiences of the roles of women in biodiversity conservation in their communities. Many common points emerged, such as the struggle for access to land, and how traditional biodiversity management practices are now threatened by various mega-projects and harmful government policies that only serve corporate interests. There was a special tribute to the struggles of women environmental defenders such as Berta Caceres, Maxima Acuña and Silvia Gattica. There was also space to discuss ways of strengthening the visibility of women in biodiversity conservation, and opening up channels of communication for supporting and strengthening further work in the region.