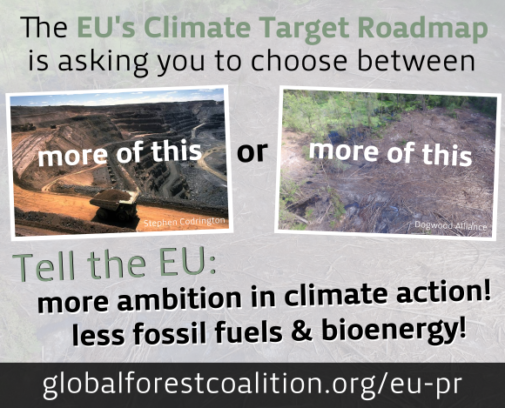 Amsterdam, 23rd June 2020 – In a strong critique of the EU’s stakeholder consultation about potential major revisions to its climate policy, Global Forest Coalition, representing more than 100 NGOs and Indigenous Peoples Organisations around the world, accuses the European Commission of a biased approach by forcing stakeholders to choose between harmful fossil fuels and even more harmful biofuels. It also accuses the EU of having failed to acknowledge deep concerns expressed in a previous consultation about the harmful impacts of EU renewable energy policies on forests, wildlife, climate and communities, due to their support for bioenergy.

Simone Lovera, Director of the Global Forest Coalition says: “The EU consultation asks us to choose between unacceptably high fossil fuel use or the burning of forests’ wood and other harmful biofuels. These false choices are disastrous for climate, forests and communities. The EU needs to rapidly phase out all fossil fuel and biomass burning, significantly reduce its wasteful energy use, and switch to the cleanest and lowest-carbon sources of energy. None of those priorities are addressed in this sham consultation.”

In a letter sent in lieu of a formal consultation response, Global Forest Coalition expresses two deep concerns that it is unable to address in the consultation format: on the one hand, the EU proposes to increase its share of renewable energy to a maximum of 40% by 2030, which is woefully insufficient for addressing the climate emergency. On the other hand, the EU continues to allow its renewable energy target to be met by burning wood and biofuels. Burning more of those will be disastrous for the climate, biodiversity and communities alike. Currently, around 60% of the EU’s renewable energy comes from bioenergy, most of it from wood, followed by biofuels, including palm oil and soya.

Almuth Ernsting from Global Forest Coalition member group Biofuelwatch adds: “As long as biomass from wood and biofuels from crops such as palm oil, soya or maize are counted towards EU renewable energy targets, those targets will reduce greenhouse gas emissions on paper whilst increasing them in the real world. If we want any chance of keeping global warming to within 1.5 or even 2 degrees, we need to stop cutting down trees for energy and converting land to crop and tree plantations – at the same time as stopping fossil fuel burning.”

In a previous consultation in March, Global Forest Coalition and many other organisations and individuals expressed concerns about the role of bioenergy within the EU Renewable Energy Directive, however, in this new consultation, the European Commission has failed to acknowledge those submissions or any of the concerns raised.

The letter sent to the European Commission can be found at: biofuelwatch.org.uk/2020/eu-climate-roadmap-consultation/