Delving into Community Conservation and ICCAs

Together with other partners the Global Forest Coalition (GFC) has started the Community Conservation Resilience Initiative (CCRI). The CCRI aims to contribute to the implementation of the CBD’s 2011­-2020 Strategic Plan and Aichi Targets by assessing the resilience of community conservation initiatives in at least 60 communities in 20 countries [1]. It is a project that presents a bottom-up approach to conservation strategies and advocates for enhanced support to community driven strategies. A number of CCRI activities are already underway, and the results are inspiring [2]. GFC intensified its activities over the last few months and organised several CCRI workshops and side events at international meetings on Community Conservation and ICCAs. These activities enabled the sharing of Indigenous Peoples and local communities’ experiences and policy recommendations on community conservation and ICCAs as well as gathered feedback for planning the way forward for the CCRI.

CCRI Steering Committee Meeting at CBD SBSTTA-20 and SBI-1
The CCRI Steering Committee met on April 28 – 30, during the meetings of the Subsidiary Bodies on Scientific, technical and Technological Advice (SBSTTA) and Implementation (SBI) of the Convention on Biodiversity (CBD) in Montreal, Canada. The overall objective of the meeting was to have an in-depth discussion on the CCRI projects that took place in 2015 and the opportunities and challenges encountered in the process. The CCRI Steering Committee also discussed strategies to further strengthen activities for the next CCRI project partners for 2016-2017, taking into consideration the ongoing challenge of continuing the CCRI work post-funding. There was also a discussion on communications strategy and ways to share the positive outcomes of the CCRI into national, regional and international processes. One of the challenges identified was the full participation of women in the CCRI and it has been decided to apply a renewed and enhanced focus on this with the next CCRI partners in the coming year. 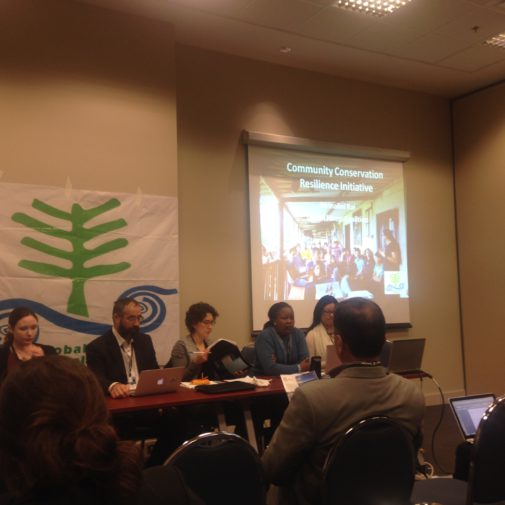 There was also a side event organised at the CBD SBSTTA-20 meeting entitled ‘Indigenous Peoples’ and Local Communities’ Recommendations for Appropriate Recognition and Support of ICCAs and other Community Conservation Initiatives’[3]. The discussions delved into key issues relating to community conservation under the CBD, Indigenous Peoples’ and Community Conserved Territories and Areas (ICCAs) in global databases, and the unique and invaluable role of Indigenous Peoples and Local Communities and women in these spheres. The side event highlighted how recognition and support of ICCAs and community conservation can contribute to the achievement of the Aichi Biodiversity Targets, in particular to Target 11, and the various forms of support that the communities and their conservation initiatives still need to remain resilient. Specific experiences of community conservation practices and traditional knowledge were shared from the Guna indigenous people in Panama and Udege communities in Russia. They also presented the threats facing their communities, livelihoods and conservation approaches and the kinds of support that they still need. Together with the ICCA Consortium, members of the newly established CBD women’s caucus and other allies, GFC advocated for the importance of community conservation and traditional knowledge not only at the side event but also throughout the SBSTTA and SBI meetings.

UN Permanent Forum of Indigenous Issues
The Fifteenth Session of the Permanent Forum of Indigenous Issues took place from 9 – 20th May at the United Nations Headquarters in New York. A key feature of this year’s session was the launch of the System-Wide Action Plan by the UN Secretary General Ban Ki-moon. It is a six-point plan that addresses key issues to realise the full rights of Indigenous Peoples including the implementation of UNDRIP at country level. Moreover, the theme of the fifteenth session was ‘Indigenous Peoples: Conflict, Peace and Resolution’, which served as a strong platform for Indigenous Peoples to discuss the deplorable conflicts occurring in their homelands and make recommendations. Many Indigenous Peoples called for their own Member States to recognise and implement the rights enshrined in the UNDRIP, particularly land rights. At the global level, many calls echoed the need to enhance the participation of Indigenous Peoples at UN bodies and processes [4]. There were many inspiring interventions and side events led by Indigenous Peoples during the Permanent Forum, including many women and youth groups. GFC also held a side event on land and resource conflicts and the resilience of community conservation and ICCAs. As part of this event, speakers discussed the destructive land and resource conflicts faced by communities in Malaysia, Kenya and Colombia and the resilience and initiatives of communities to combat this, with a special focus on the CCRI processes in their communities.

UNEA-2: Delivering on the 2030 Agenda
The 2nd United Nations Environment Assembly met during May 23 – 27 at UNEP Headquarters in Nairobi. The meeting ended with quite some controversy over environmental protection in Palestina. The assembly accepted 25 out of 26 Resolutions and many Resolutions that did pass were weakened throughout the negotiations. The much-debated Resolution on Natural Capital involved long rounds of discussion on its definition and ended with very little clarity, just a reference to what it is understood; however, during the different events the terms natural capital and natural resources were used with little or no differentiation.

GFC as one of the Organizing Partners for the Women’s Major Group (WMG) on Sustainable Development as well as a partner in the co-facilitation of the WMG at UNEP, held a side event at UNEA-2 on Friday May 27th, 2016. The event focussed on the “Roles, rights and needs of women in community conservation and how to enhance them within the SDG framework” and managed to fill the room with a diverse and interested audience. The side event first introduced the CCRI as well as the findings that all the communities have numerous traditions and approaches to conserve biodiversity but also face significant threats. The CCRI participatory methodology was shared, which includes a strong focus on analysing gender issues in community conservation. The guiding questions that the CCRI uses for the gender analyses in the communities as well as a few examples of completed initiatives were presented. Another presentation explored how the CCRI and enhanced support for community-driven conservation strategies can assist in the implementation and achievement of the SDGs and Aichi Biodiversity Targets. The CCRI is an important tool for bottom-up monitoring of the different SDGs including SDG15 on Forests (including target 15.2 on halting deforestation by 2020) and SDG5 on Gender Equality, amongst others. The Indigenous Alliance of Tribal Peoples of the Tropical Forests continued discussions by raising the different problems that communities in Kenya confront when practising their community-based conservation activities. Livestock and agro-industrial expansion of tea crops and sugar cane were some of the factors that influenced community conservation in the area. Community experiences show that issues such as land tenure and women’s empowerment are difficult to overcome but are still possible and that local and national government involvement is also important.

Immediately following UNEA-2, GFC together with four other organisations held a start-up meeting for a new 5-year project around gender responsive implementation of the SDGs. This project is funded by the European Commission Development and Cooperation (DEVCO) and will involve networking of women’s and gender-focussed civil society organisations around implementing the SDGs, policy monitoring and advocacy, capacity building and media and social outreach.

CCRI national workshops
Through participatory processes, GFC encourages communities to assess the resilience of their own conservation practices in light of external and internal threats, and to develop concrete, bottom-up recommendations for appropriate support for their conservation practices. One of the countries is Tajikistan where a CCRI workshop took place on May 12, 2016, with GFC partner groups on capacity-development towards adapting local communities’ livelihoods in sustainable mountain forest ecosystems. 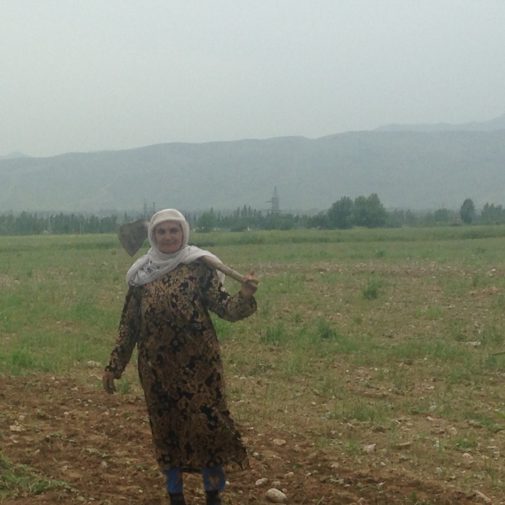 The communities shared their concerns and explained how they conserve trees and forests around their villages. Tajikistan is a centre of origin of many fruit trees like apricot, cherry, plum and almond. Local people bring sprouts of these trees from the forest and use them for the natural selection in private or collective gardens. Also they build fences around trees and around plots of forests to protect them from the livestock. There were 3 million sheep in Tajikistan 25 years ago when the Soviet Union collapsed and Tajikistan became an independent state. Now there are more than 8,5 million sheep, however, there are not enough pastures for them. Every summer shepherds go with large herds of sheep to the north of the country and every winter they migrate to the south of Tajikistan. In 2016 activists from Noosphera will visit 5 project communities, listen to needs of local people, facilitate discussions with members of communities including women, youth and elders [7].

Community views on CCRI during the national workshop in Narok, Kenya.
Indigenous Information Network (IIN) in collaboration with GFC organised a CCRI workshop and gender training in Narok County, Kenya on May 31, 2016. These meetings were attended by representatives of the communities of Lolgorian, Suswa, Olulunga, Kimintet, Olorkuto, Oloirien, government officials of the County of Narok, and various GFC staff members. 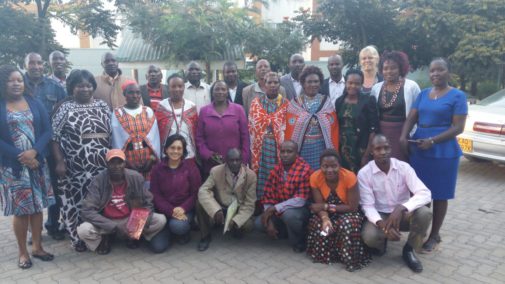 Participants during the National CCRI workshop held in Narok

Communities raised a large number challenges facing the conservation of their bio-cultural resources. These include charcoal production to meet the demand from urban areas, which is a big driver of forest destruction, land tenure issues in pastoralist communities, and poor government policy towards conservation of community natural resources. It was mentioned that there are no management plans for communities and government to follow when it comes to conservation of forests and wetlands but that the local government will deliver on draft legislation soon. Communities also shared their sustainable conservation and livelihood activities, including; cattle keeping, apiary, beading, and cultivation on a small scale. It was discussed that women should be at the centre of conservation. The communities discussed that they should hold their leaders accountable and demand for alternative sources of energy such as renewable solar energy, improved energy saving stoves. The communities also welcomed the CCRI and that it would go a long way to organise communities and bind them together.

GFC and IIN also held a consultation meeting with women from the Olulunga community in Narok County who shared their conservation and livelihood strategies and the threats that they are facing. The women self-organise and work together for livelihood generation and conservation, including by setting up a money lending system, producing and selling briquettes made from cow dung, recycled paper and other materials for clean cooking, producing jewellery and handicrafts, and planting trees and selling tree seedlings. These women show great leadership and innovation when it comes to sustainable livelihood generation and their contribution to conservation of the community’s forests is invaluable. 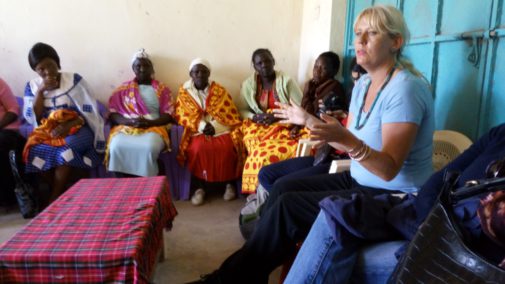