Deliberating Conflict, Peace and Resolution at the 15th Session of the UN Permanent Forum on Indigenous Issues

By Jeanette Sequeira and Mrinalini Rai

At the opening ceremony, the UN Secretary General Ban Ki-moon announced through a video message the launch of the System-Wide Action Plan[3] to realise the full rights of Indigenous Peoples. This is significant because the System-Wide Action Plan had been one of the recommendations in the Outcome Document of the World Conference on Indigenous Peoples (WCIP)[4] that called for the United Nations to ensure a coherent approach to achieving the ends of the United Nations Declaration on the Rights of Indigenous Peoples (UNDRIP) (A/RES/69/2, para 311). It is a six-point plan that addresses key issues including the implementation of UNDRIP at country level, raising awareness of UNDRIP as well as the realisation of Indigenous Peoples rights in the implementation and review of the 2030 Agenda amongst other elements.

The theme of this year’s fifteenth session was ‘Indigenous Peoples: Conflict, Peace and Resolution’. This served as a strong platform for Indigenous Peoples to discuss the horrific and deplorable conflicts occurring in their homelands, including militarization in their territories and the violent oppression and land dispossession they face worldwide. Many Indigenous Peoples highlighted the conflicts they encounter with land and natural resources, especially in light of heightened mega-projects such as dams and mining exploration plans promoted by governments and private sector. Such projects have lacked respect, promotion and protection of Indigenous Peoples, including their free, prior and informed consent (FPIC). Many Indigenous Peoples and members of the Permanent Forum voiced concerns regarding the plight of indigenous human rights defenders who are being subjected to intimidation, harassment, and violence, which in many cases leads to their death. The Permanent Forum urged the Inter-American Commission on Human Rights to investigate the assassination of Berta Caceres in Honduras and called upon the Government of Mexico to resolve the disappearance of 43 young trainee teachers in Guerrero, Mexico. 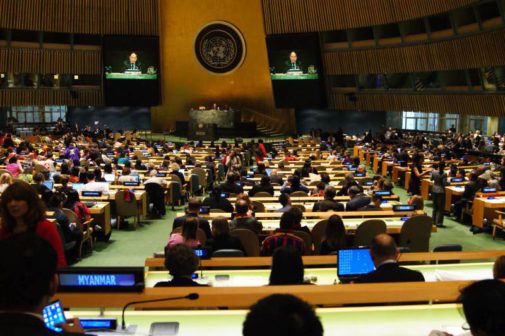 There were strong and fervent calls for the Member States to truly recognise and implement UNDRIP and the recommendations set out in the Outcome Document of the WCIP. There were several calls for action made by participants, including on the right to life, peace and security as well as self-determination of Indigenous Peoples. Other important issues that arose included the prevention of suicide among indigenous youth, preservation of cultural heritage and indigenous languages, and the greater participation of Indigenous Peoples in United Nation bodies and processes that discuss issues that affect them. With regards to the future work of the Permanent Forum, it was recommended that the Permanent Forum should find ways to ensure the implementation of its recommendations by Member States and other partners.

Moreover, there were many inspiring interventions and side events led by Indigenous Peoples during the Permanent Forum. Indigenous women made serveral interventions reinforcing the need to address violence and discrimination against indigenous women and girls and to recognise their unique roles and aspirations in community life, environmental conservation, and conflict-resolution and peacebuilding. GFC also held a side event on land and resource conflicts and the resilience of community conservation and Indigenous and Community Conserved Territories and Areas (ICCAs). As part of this event, speakers discussed the destructive land and resource conflicts faced by communities in Malaysia, Kenya and Colombia and the resilience and initiatives of communities to combat this, with a special focus on the Community Conservation Resilience Initiative (CCRI) processes in their communities.

There were also several interesting developments on the part of Member States, for example, after being one of the four countries that voted against the declaration, Canada has now become a full supporter of UNDRIP under the new leadership of Prime Minister Justin Trudeau. The country announced that it is making it a constitutional obligation to comply with all the principles of the UNDRIP. The newly supportive Canadian government is planning to set up an inquiry into murdered indigenous women as well as a truth and reconciliation commission amongst other things.

Whilst this event has provided a necessary and interactive space for indigenous peoples to make their claims and recommendations, it still falls short of meeting the full expectations of Indigenous Peoples. Many echoed calls that Indigenous Peoples’ participation is still limited at the Permanent Forum, where only a few experts are able to participate and meet with Member States. Increased and expanded forms of participation need to be implemented at the Permanent Forum as well as other UN spaces including in the review and follow up of the 2030 Agenda such as in the High Level Political Forum. Participants further recommended that Members States and UN agencies widely disseminate the Sustainable Development Goals to Indigenous Peoples using culturally appropriate educational tools and in indigenous languages. The Permanent Forum also welcomed the intention of the Commission on the Status of Women to place the issue of empowerment of indigenous women as a focus of its sixty-first session in 2017.

[1] The UN Permanent Forum on Indigenous Issues is an advisory body to the UN Economic and Social Council (ECOSOC) that provides expert advice to ECOSOC an to UN programmes, fund and agencies of indigenous peoples issues within the UN system. Its mandate also includes the responsibility to ‘promote respect for the full application of the Declaration and follow-up the effectiveness of the Declaration’.
[2] https://www.un.org/development/desa/indigenouspeoples/unpfii-sessions-2/unpfii-fifteenth-session.html
[3] http://www.un.org/esa/socdev/unpfii/documents/2016/Docs-updates/SWAP_Indigenous_Peoples_WEB.pdf
[4] http://www.un.org/en/ga/69/meetings/indigenous/#&panel1-1
[5] https://www.un.org/development/desa/indigenouspeoples/wp-content/uploads/sites/19/2016/05/L8RevisedbyRapp.pdf