The Community Conservation Resilience Initiative (CCRI) took place within communities in the Mariepskop area and Houtbosloop Valley in Mpumalanga province, South Africa. These sites were chosen for the CCRI as they reflect the biodiversity and land use practices common throughout the country. The traditional inhabitants of Mariepskop site are descended from the Pedi people, specifically the Mapulane tribe. This area is comprised of savannah bushveld and grasslands in the mountainous upper catchment. Since the 1930’s, a large part of this territory was converted to industrial timber plantations of alien timber species, primarily Eucalyptus and Pine plantations. Land is owned by the state and under traditional authority with local chiefs deciding on land use. 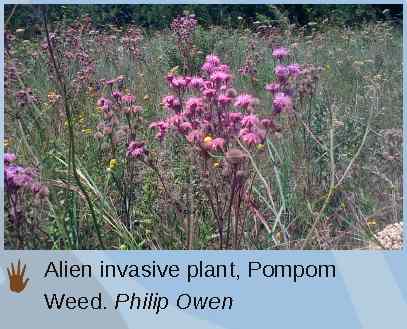 The Houtbosloop Valley is home to a wide range of wildlife including the red duiker. European farmers settled the area in the mid 1800’s. Land use in the area is comprised primarily of timber plantations owned by small private growers, large multinational corporations, and state owned plantations. Macadamia and pecan nuts are also produced in the valley along with cattle and poultry farming. Several timber-processing plants have been established in the valley and there is a range of tourism-oriented business.

In both project sites free, prior and informed consent (FPIC) was obtained from community members to inform them about the process and the CCRI assessment. At the Mariepskop site, this involved five meetings with community committee structures, where youth and women were represented, in three villages in the area. Likewise, in the Houtbosloop Valley, an e-mail was sent to landowners in this assessment site and some community members were approached in person and informed about the process. 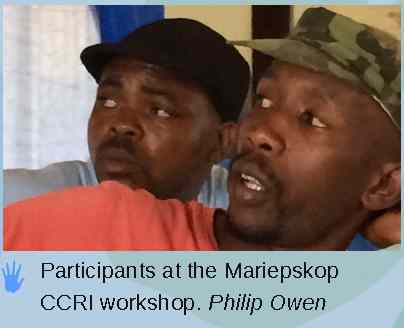 In the initial stage of CCRI a one-day workshop was held at the Mariepskop site, with fifteen community members, half of which were women, while at the Houtbosloop Valley site one on one interviews were held with community members. The assessments revealed unique internal threats for each site and many shared external threats.

Internal threats in the Mariepskop assessment included soil erosion, deforestation and water pollution. For example, the wide use of wood for cooking has led to deforestation. Furthermore, waste removal services are non-existent and all participants expressed concern regarding disposable diapers being discarded in the rivers.

In the Houtbosloop Valley participants identified bush encroachment and decreasing water quality as major internal threats. The grassland in the area is extremely diverse and home to an estimated 4,000 plant species. Bush encroachment has led to a loss of biodiversity and grassland services. Additionally, the water quality of the local river has decreased significantly due to an extensive dirt road infrastructure, burning practices, and large scale timber plantations, which has also led to certain fish species becoming locally extinct.

The common external threats that were identified by the two communities included climate change, environmental degradation, a growing population, and crime. Additionally, in both assessment sites the municipalities lacked the capacity to provide basic services such as waste removal and road maintenance. Vast industrial timber plantations have been established in the upper catchment of both assessment sites and are placing serious strain on water quality and quantity. In both assessment sites, the poaching of wild animals by wire snares negatively impacts biodiversity in the areas.

There is active civil society and high organisational capacity with the communities of the Mariepskop assessment site. This area is known as a political hotspot and therefore a comprehensive participatory process is critical to obtain consensus on any solution-oriented strategies. Some community members actively participate in government-sponsored forums where decisions are made regarding the utilisation and management of the local river systems. More community participation should be encouraged. Due to the high rate of unemployment in the area, the government should enable community participation in public forums by providing transportation assistance.

In the Houtbosloop Valley there is more financial capacity amongst landowners, and several private landowners and businesses have focused significant energy and resources on combatting invasive species in grassland areas. Additionally, they have founded an organisation focused on controlling wire snare wildlife poaching. In both project sites, community policing forums have been established to counter escalating violent crime. Care should be taken that all community residents are included in these processes.

Communities in both sites identified the need for further environmental education, increased awareness and enforcement of environment regulations, and more community involvement in state processes that aim to foster natural resource management, including implementation of the CCRI. Furthermore, high value natural areas should be identified and protected and more initiatives should be developed and integrated for invasive plant management. Support for these recommendations would promote community conservation resilience. 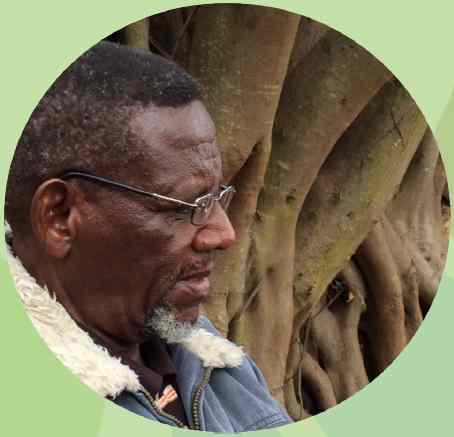 Dr. Mashile was born in the foothills of the Mariepskop Mountains. He is an educator and a respected community leader. The Mashile family formed a trust and has lodged a land claim over the area. According to Dr. Mashile, the community is divided due to community property associations established by the government, which complicates and delays the land claim process. Dr. Mashile believes that when the land claim is finalised, people will again become stewards of the land. He speaks of rehabilitating and diversifying the Mariepskop Mountains and investing in eco-tourism opportunities that exist in the area.