The Community Conservation Resilience Initiative (CCRI) in Kenya was carried out with two indigenous communities, the Maasai from Trans- Mara, Narok County, and the Rendille from Kargi, Kamboye, Korr and Logologo of Marsabit County. The CCRI assessments employed a participatory approach that included focus group discussions, sketch mapping and storytelling, all with a view to assessing the biodiversity and threats to conservation within the Nyekweri Kimintet Forest and Marsabit communities. The assessment revealed that in the past the Nyekweri Kimintet Forest and Marsabit were abundant with flora and fauna but the communities have observed that this has now decreased in some areas.

Nyekweri Kimintet in Trans-Mara borders the Maasai Mara National Park and is a significant breeding area for elephants from the reserve. Inhabitants of the forest practice pastoralism as their main livelihood. In 2005, community members formed the Nyekweri Forest Kimintet Trust to strengthen their ability to conserve biodiversity. Approximately 80% of the land within the area has been allocated to individuals with the remaining land under communal ownership. The trust covers 6,000 acres, and helps to secure and ensure the continued protection of land dedicated to the conservation of biodiversity, preventing its conversion to other land uses.

Community members from Kimintet participated in a workshop, mapping exercise and focus group discussions, in which they assessed the resilience of the community conservation around the forest and the roles of community members. Few women attended the initial workshop due to cultural barriers, so a separate meeting was subsequently organised for the women. This was later followed by a joint meeting for all community members with more women present and men committing to involving them in decision-making processes.

Community members asserted that their area is an important biodiversity hotspot with some of the only remaining indigenous forests hosting sacred sites, sheltering wildlife and providing wild fruits and medicinal plants. Approximately 80% of Kenya’s wildlife lives outside Protected Areas because most of them are not fully fenced. The wildlife moves in and out of these areas in search of pasture and water especially during the dry season, and interacts with people on private and community land. [1] 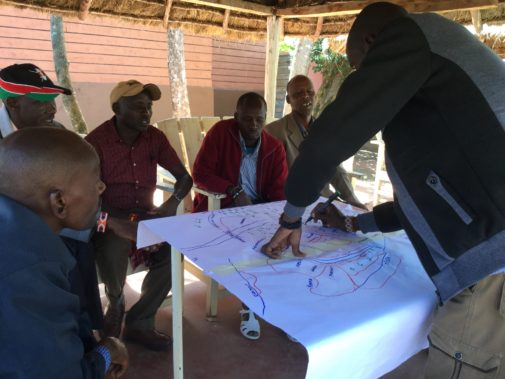 The second CCRI took place in Logologo and involved the Rendille peoples from the Logologo, Korr, Kamboye and Kargi communities of Marsabit county. The community members are pastoralists and utilise nearby forests for materials for constructing houses (‘manyattas’), herbs and fuel. They live in lands that are 20% privately owned and 80% under communal ownership or held in trust by the county government.

Indigenous women made up 99% of the participants (in contrast to the CCRI assessment in Trans-Mara) with the local chief also participating. This was because the men had migrated in search of pasture due to the dry season, aggravated by the impacts of climate change—and the women are left to manage the households.

Nevertheless patriarchy is an issue in both communities, with women being perceived as inferior and decisions being made solely by the men. However, the indigenous women from both areas highlighted that they have been playing key roles in conserving biodiversity and holding traditional knowledge relevant for conservation. They ensure inter- generational learning, the transmission of vital knowledge and values. In addition the women in Marsabit are generally the sole breadwinners in their households, raising income through the sale of beadwork and irrigated farming. This helps families to cope with the absence of the men, making them less vulnerable.

The Kenyan government is well advanced in matters of policy and legal instruments. The Environment Management and Coordination Act asserts various environmental rights and responsibilities, with its general principles founded on Article 42 of the 2010 Constitution. This gives every citizen the right to a clean and healthy environment, including the right to have the environment protected for the benefit of present and future generations. The Constitution also recognises Indigenous Peoples (in article 260); defines forests as natural resources; and classifies community forests that are vested in the communities as community land (Article 63). However the Constitution does not specifically provide for the conservation and preservation of forests. In addition, the new Community Land Act, passed in 2016, is geared towards ensuring gender equality and tenure security. However, women are not aware of their rights. [2] 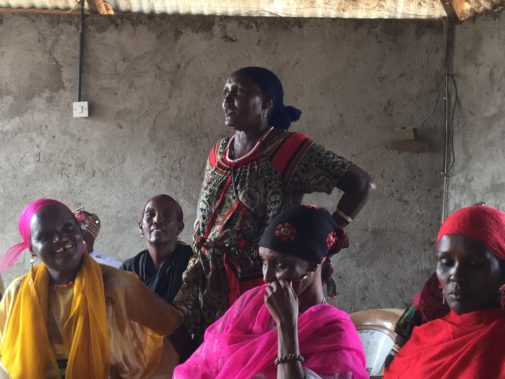 The Maasai around Nyekweri Kimintet have lived in harmony with wildlife and conserved the forests through customary laws and values.

During the assessments community members from Nyekweri Kimintet Forest identified key external threats including a lack of legal protection of community forest by the county and by national laws or institutions tasked with providing protection. The legal framework recognises the community forests’ role in biodiversity conservation and ecosystem services, but does not support communities to strengthen their conservation; and national and
local forest and wildlife authorities do not work in community forest conservation areas. The increasing impact of drought has also resulted in a loss of biodiversity as well as water, leading to wildlife-human conflict.

The main internal threats mentioned were the erosion of cultural values governing conservation, due to the privatisation of lands and a loss of traditional ecological knowledge as the youth leave the community to find employment in towns; and deforestation due to charcoal burning and overgrazing.

The Rendille peoples have a similarly strong connection with the environment and have values related to conservation rooted in their culture. For example, traditionally they will only cut down tree branches when needed for constructing houses, and medicine and herbs are extracted sustainably. As pastoralists, the community has planned migration routes for their livestock which allow for the regeneration of vegetation.

During the assessments, the Rendille women identified four key internal
threats. Firstly deforestation which is being driven by demand for wood and charcoal and the overgrazing of livestock, resulting in the loss of key tree species and wild animals. Secondly there is an erosion of traditional knowledge and values, which has led to uncontrolled use of resources. Population increase and the impacts of extractive industries like sand harvesting were also raised.

The external threats identified included outsiders illegally settling on their land during the drought seasons, particularly in Logologo community. Another problem is the spread of an invasive tree species, prosopis juliflora or ‘mathenge’, which was introduced by the government and is now widespread in Marsabit. It has been considered a menace for a long time by the residents, due to its negative impacts on livestock and indigenous species in the area. The Environmental Management Coordination Act requires that any introduction of alien species for whatever purpose requires an environmental impact assessment (EIA) license to be considered legal.
In this case, an EIA was done but there has been no social impact assessment. [3] Climate change has led to diminished fresh water sources and extreme drought in Marsabit. [4] 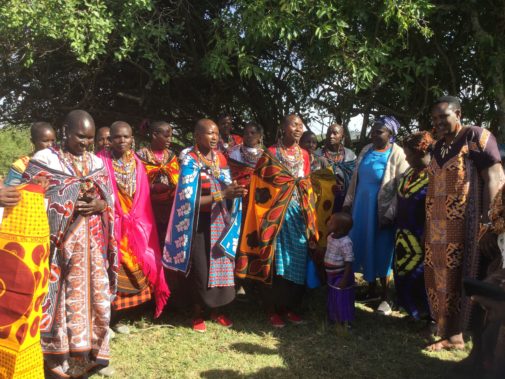 The vision of Nyekweri Kimintet Forest community members is to sustain the forests for future generations.

Community proposed solutions for internal and external threats include support for the community, including for exchange visits to other wildlife conservation areas, for practical learning and adaptation of best practices, and strengthening linkages with county and national government environmental authorities like the Kenya Forest Service (KFS) and the Kenya Wildlife Service (KWS). Other solutions include financial support for management of the conservation area, to carry out reforestation initiatives to restore degraded areas and to pay volunteer game scouts to monitor the conservation area; and the development of community protocols to complement national laws and regulate community interaction with the land and implement pasture and land management systems. Awareness raising among community members and information sharing about existing national legislation that relates to the environment would support engagement with policy makers and help to ensure law enforcement.

They recommended strengthening Nyekweri Kimintet Forest Trust as an institution and setting up ecotourism, in order to enhance community participation in sustainable conservation and facilitate the conservation of wildlife resources.

The Rendille communities recommend halting deforestation through raising awareness about the importance of conservation, sharing information about sustainable use, and advocating for widespread behaviour change to improve environmental health and wellbeing.

The community-proposed solutions include strengthening engagement with local leadership and county leadership in developing new by-laws addressing the issue of extractive industries; partnering with civil society organisations for advocacy and trainings on existing conservation and environmental laws; and the development of community laws to govern the use of resources. They also called for the formation of community environmental committees to strengthen their role in conservation, conducting capacity building workshops, utilising local ‘barazas’ [5] to mobilise the whole community, and strengthening their ownership of the process. Utilising women’s groups to advocate for environmental issues and climate change was also highlighted.

Their recommendations were to undertake advocacy targeting local leadership and the environment authorities of the County Government, and to strengthen the role of women in conservation by creating women’s networks for conservation and advocacy for environmental issues at local and county level, with links to national level advocacy networks.

Sankau Ole Ntokoyuan is a Maasai elder who practices pastoralism. Together with other members of the Kimintet area he has given up private land to contribute to the conservation of the Kimintet forest, to continue building the resilience of their conservation efforts. He is vocal in community forest protection and advises the community trust on conservation issues. He says: “As a community that is keen on conservation, the CCRI has helped us understand issues we couldn’t understand on our own. It’s reminded us of the past, the challenges of the present and that we can now plan to restore our conservation practices and strengthen our resilience more effectively. We are committed to continue our traditional conservation practice.” Sankau Ole Ntokoyuan, Kimintete Village

Alice Howo Lesepen is a Rendille indigenous woman from Logologo in Marsabit
County, Kenya. She is secretary and a member of the Merigo Women’s group, which seeks to empower indigenous women in understanding their economic rights and to raise awareness about environmental conservation and advocacy in relation to extractive industries. She has been an active advocate at the local level and is a member of the environment committee in her community. Alice says “I’m happy about the CCRI because it’s helpful to us. We indigenous women have been playing a crucial role in conservation and how traditional knowledge is relevant for present day challenges and future generations.” Alice Hawo Lesepen, Logologo, Marsabit

This summary is based on a full CCRI report about the communities’ conservation resilience assessment in Kenya, which can be found here.