The Centre for Sustainable Development (CENESTA) introduced the Community Conservation Resilience Initiative (CCRI) to community representatives in Iran at a workshop in Poldokhtar, Luristan Province, in December 2014. With their consent and in collaboration, a variety of participatory methodologies were developed, including the articulation of indicators to analyse resilience. This bottom­up process has ensured more involved and informed participation in the CCRI assessment.

Three communities were selected based on their unique resilience in coping with changes in their landscape: The Abolhassani Indigenous Nomadic Tribal Confederacy for its resilience to drought, the Taklé Tribe of the Shahsevan Indigenous Nomadic Tribal Confederacy and their efforts to rehabilitate the red spotted trout and the brown bear and finally, the Farrokhvand Tribe of Bakhtiari Indigenous Tribal Confederacy for their attempts to devise their own conservation plans in their lands. Each community has its own norms of customary governance, which continue to be relevant. There is a great deal of cooperation between men and women and though women might not be physically present in decision­making bodies, they are consulted on important issues and their opinions are part of the broader decision­making process.

Despite the long history of nomadism in this area, government and development agencies have failed to understand rangeland management that communities have practiced for centuries. [1] National policies continue to undermine nomadism, refuse to acknowledge its importance as a specialised adaptation to local environments, its ecological role or its proven capacity to provide livelihoods.

The Abolhassani Indigenous Nomadic Tribal Confederacy is located in the extremely dry area of southeast Semnan Province. It is enclosed within a UNESCO Biosphere Reserve and part of a mosaic of protected areas. The Abolhassani have demonstrated remarkable resilience to drought through both indigenous knowledge and innovative solutions by incorporating limited agricultural opportunities to their mainstay of herding. The efforts of the community have also ensured healthy pastures and forests with an abundance of endangered and/or rare plant species.[2]

The Taklé Tribe belongs to the Shahsevan Indigenous Nomadic Tribal Confederacy in Ardebil Province. The government and private companies took over the tribe’s wintering grounds a few decades ago. This increased grazing pressure on the summering grounds resulting in greater soil erosion, floods and the destruction of the habitat of the red spotted trout [3] in Ali Dervish River. The decrease in red spotted trout in turn caused brown bears to leave their natural habitat. The tribe has worked to restore the habitat of the trout and hopes to reverse the cycle of damage. Some tribespeople also claim that the numbers of partridge have increased due to their efforts in conservation and monitoring the partridge population.

The third assessment took place with the Farrokhvand Tribe of Bakhtiari Indigenous Tribal Confederacy in Southwest Iran. The tribe has been developing a conservation plan in their mid­range ICCA, [4] resulting in the rehabilitation of territory based on the restoration of endangered plant species such as wild mountain celery.

Common internal threats identified by communities include a lack of interest in the youth in learning indigenous skills and knowledge and decreasing consumption of traditional foods in favour of fast foods. In some areas over­utilisation of available pastures has led to a decline in wildlife, degradation of pastures, and invasion of woody and salty plants. This has made them more vulnerable to prolonged and increasingly intensive droughts, soil erosion and flooding.

The communities identified undermining of land rights, tenure, indigenous knowledge and customary management as external threats. The nationalisation of natural resources and rangelands
has taken away the rights of indigenous communities with respect to their ancestral lands and has severely undermined the resilience of communities to cope with adverse environmental changes.

The communities developed a range of solution­oriented strategies to counter these threats. They suggest more flexibility and trust from the government regarding grazing licenses which should be based on customary management. The government should play a more enabling role by purchasing livestock and dairy products at a fair price and offer relief to livestock and communities during periods of drought. Other solutions include exploring the potential of local crafts, specifically crafts made by women, and technical inputs to complement the traditional management of livestock, orchards, fodder and water harvesting systems.

Their suggestion to a broader audience is to acknowledge the ecological role of grazing in maintaining rangelands and that this traditional system of rangeland management be considered as an alternative to conventional management systems. At the national level, legal reform is needed to provide some recognition for elders’ judgments on various matters, especially those pertaining to management of natural resources. These systemic changes can greatly enhance the resilience of the communities. 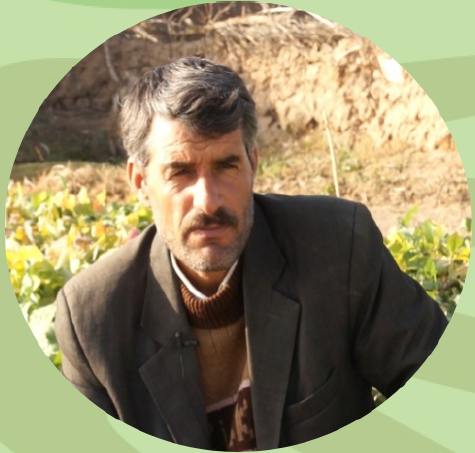 “The climate used to be quite different in the past (in Abolhassani ICCA). We soon realised that the traditional form of livestock rearing doesn’t work anymore. So we decided to reduce the number of sheep and invest the money partly in agriculture… we could increase each lamb and sheep weight up to 30 kilos by May and generate quite an extra income… We realised that this initiative works much better than just increasing the sheep and goats in numbers when a simple drought could destroy most of them.”