The neoliberal economic model imposed in Chile has promoted export-oriented extractive industries, including mining, agroindustry and forestry. Studies show that the Chilean model of forest development is the main factor driving the loss of native forests[1] and associated biodiversity. This is having direct and devastating impacts on peasant communities and indigenous peoples, who depend on forests for food, traditional medicines and religious purposes. Hydroelectric and subsidised forest industry activities have been established on community lands without their permission, and the pulp and paper industry has polluted their territories.

This assessment was developed in three locations in southern Chile, selected because of their problems and ecological diversity. The communities in this region are particularly impacted by plantation forestry and the installation of large hydropower projects to provide energy for mining. ‘Guided conversations’ were conducted and community workshops focused on ‘social cartography’ or mapping, allowing the communities to collate and reflect upon information about their resources and challenges to their resilience.

The first group of communities is Santa Bárbara-Quilaco-Alto Bio-Bío. Non-indigenous peasant communities co-exist with members of the Mapuche-Pehuenche indigenous people, who are traditionally linked to the Andean deciduous and high Andean Araucaria forests.[2] They have to deal with the expansion of industrial forestry and the construction of hydroelectric projects.

The second community is Tralcao-Mapu. Most of the peasants in this community hail from the Mapuche-Lafquenche indigenous people, who have a history of fighting for the survival of their culture and customs, and the protection of their wetlands. This community is associated with the Valdivian temperate rainforest, forest type coigüe-raulí-tepa.[3] Their territory is threatened by the expansion of monoculture tree plantations and pollution from the cellulose industry.

The third community is Chanlelfu, and the people here are also Mapuche-Pehuenche. They are struggling with the impacts of forest plantations that threaten local biodiversity and places of cultural importance.

The communities report significant social and biological impacts that threaten their resilience and their ability to continue to live in ways that respect and conserve their local ecosystems and biodiversity.

These include the contamination of air and rivers by the paper industry, and a dramatic decline in biodiversity leading to imbalances in the food chain. They report extensive water-related issues, from water shortages, through to changes in river flows and flooding. They are worried that the risks associated with dams during storms, earthquakes and volcanic activity are not being considered as a whole in the projects’ environmental impact assessments.

The changing socioeconomic context is also affecting the viability of communities. Relocation to new areas with little or no support is a major concern, as is the reduction in land available for agricultural production and traditional practices. Government policies also overlook the organic nature of communities, tending to split them apart. The communities are especially worried about the migration of young people to the cities, and expressed concern about loss of ancestral knowledge and discrimination against people speaking indigenous languages.

The communities’ resilience, and their ability to continue managing and conserving their local environment, could be significantly enhanced by policies designed to empower them, by promoting self-determination, strengthening cultures, rescuing native languages, and reviving traditional ways of relating to nature.

Their resilience would also be enhanced by increased respect for the Mapuche worldview and culture. This includes returning the Mapuche people’s ancestral lands, allowing the exercise of sovereignty, and ensuring effective participation in decision-making relating to territories. Developing intercultural education would help to improve the relationship between Mapuche and non-Mapuche communities, enhancing solidarity and cooperation.

Ecosystem recovery, forest regeneration and sustainable agriculture are key priorities. To this end it is important to move away from the industrial forestry model and to limit the installation of energy megaprojects. It is also necessary to strengthen institutions that evaluate and monitor environmental impacts.

Local energy generation projects should be developed in collaboration with communities, supporting them with financial resources and institutions, and taking advantage of the communities’ existing decision-making structures. These projects will benefit from communities’ interest in participating in projects that will help to resolve their own problems.

Finally, one of the principles of the Mapuche worldview is duality. Under this concept, man and woman are equal and complement each other. However, reports document some violence in relationships, an issue that needs to be addressed. It is important to continue promoting and supporting the leadership already developed by women. 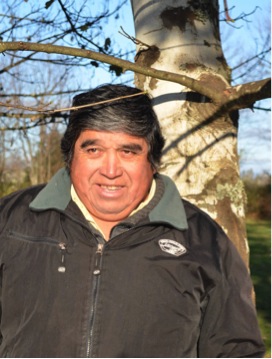 Francisco Manquecheo, 62 years of age, is a member of the Tralcao Community, San José de la Mariquina, in the Los Ríos region. Francisco returned to the land where he grew up in order to work and live in the countryside. However, the arrival of the forestry industry and its monoculture plantations polluted the air and water. Francisco says “Celco came … the authorities spoke about how it was a great company that would involve thousands of people and employ many from Mariquina. But in the end only about ten people were employed from Mariquina, and of those only one person was from my community.”