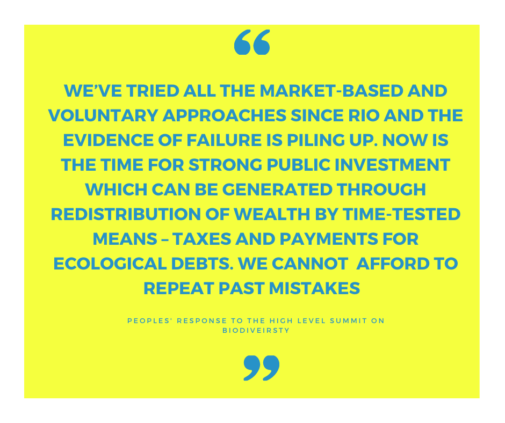 CBD Alliance Press Release: Organizations from around the world, the majority from the global South, have published a “Peoples’ response to the High-Level Summit on Biodiversity”, which raises critical points about the upcoming UN summit, the biodiversity crisis and the Convention on Biological Diversity.

Signatories do not wish this brief summit to be a distraction from the core issues related to biodiversity. The Convention on Biological Diversity is currently preparing a Global Biodiversity Framework that is meant to lead us towards living in harmony with nature by 2050, yet the destruction of biodiversity and ecosystems continues apace around the world.

Together with a stable climate, biodiversity and ecosystems are our life support system and the signatories are calling for urgent action for its protection, rather than publicity for an event that has no decision-making power and looks more like a show than a serious engagement with the issues.