Canada, UK given ‘Dodo Awards’ by Civil Society – Governments Singled out on Geo-engineering, Biofuels and Financing 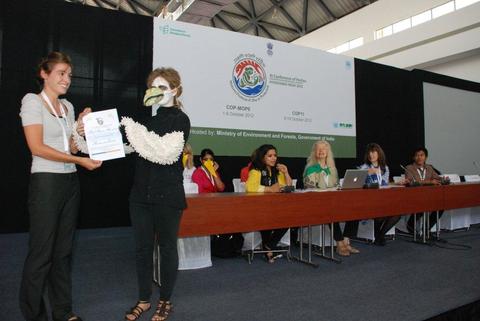 Hyderabad, India.  October 17.   The Dodo Bird is coming to Hyderabad, to give the Dodo Awards to those governments who have failed to evolve, and whose actions at the CBD are contributing to, rather than preventing, biodiversity loss.

And the Dodo Bird has spoken – the awards go to Canada and the UK.

Canada is the clear leader, for breaching the moratorium on ocean fertilization and geo-engineering adopted by the CBD in 2008 and 2010, said Silvia Ribeiro of ETC Group.  “Right in the middle of CBD negotiations, we discovered that Canada had “ignored” a huge ocean fertilization event that were recently carried out off their Pacific coast, in violation of two international conventions”, said Ribeiro.

Helena Paul of EcoNexus said Canada was also chosen for their strong stance on biofuels.  “Canada insisted that the CBD is not a place to discuss food security, and so the impacts of biofuel expansion on food should not be considered”, she said.  Furthermore, “After asserting the biodiversity benefits of biofuels, Canada threatened that they would call for a deletion of text including socio-economic issues, and re-introduce other proposals if other governments proposed any further changes to the biofuels text”.

The CBD Alliance, convenors of the Dodo Awards, also said that Canada was noted for their refusal to recognize the importance of the participation of Indigenous Peoples and Local Communities in the EBSA process, for trying to stop the CBD taking up Synthetic Biology as a new and emerging issue, and for blocking progress on financial commitments.

The UK was the other winner of the Dodo Award.  “The UK is busy behind the scenes blocking attempts in the EU and the CBD to adopt a precautionary approach to synthetic biology, and establish or maintain moratoria”, said Helena Paul.   “The UK government hopes to become a leader in these technologies, primarily for the benefit of their own economy”.

“At the same time, the UK is busy commodifying biodiversity and the functions of ecosystems by developing biodiversity offsets, said Paul. “Offsets don’t reduce biodiversity loss. Instead, the idea is to ‘pay for your sins’ elsewhere. Does the UK hope that biodiversity offsets and other financial mechanisms will replace the financial commitments that industrialized countries urgently need to make to the global effort to stem biodiversity loss?  Many in the global South call this the ecological debt owed to them by developed countries”, she said. “It also seems that the UK hasn’t learned the lessons about market mechanisms from the recent and ongoing economic crisis.”

The Dodo Award winners were chosen by consensus within the CBD Alliance members.  Runners up included China, Brazil, and Paraguay.

For more information and interviews: