Feminists Confronting Unsustainable Development’ during the 57th session of the UN Commission on the Status of Women, CSW57, talk about the experiences of women and the struggle and resistance strategies of their communities against unsustainable economic activities.

Women from Guatemala, Colombia, Kazakhstan, Japan and Fiji, came together at the side-event  organised by the Women’s Major Group, on ‘Violence – Ecologies – Livelihoods. Feminists Confronting Unsustainable Development’ during the 57th session of the UN Commission on the Status of Women, CSW57,  to talk about the experiences of women and the struggle and resistance strategies of their communities against unsustainable economic activities. This event was organised by Women in Europe for a Common Future (WECF) and the Women’s Environment and Development Organization (WEDO), in partnership with members of the Women’s Major Group from Rio+20.

Despite the fact that these women represent countries that are far apart from each other, present vast differences in their social and cultural lives, share a different history, speak different languages, they are brought together by a deep concern about Mother Earth and the current unsustainable production and consumption practices emerging from a capitalist model that has negatively impacted on livelihoods all over the world.

Economic activities in these countries have been directed to using the Earth’s resources ignoring planetary boundaries and neglecting the wide range of interlinked impacts exerted on the environment and their citizens, thus putting at risk the well being of future generations. The deadly nuclear arms race, the harmful effects of land and now oceanic based mining, natural resource and land grabs – all represent structural and root causes of impoverishment and are a reflection of ill societies, with negative consequences to last for centuries to come. The globalization of economies, and the so-called “sustainable development framework” that is currently elaborated in various global negotiation processes including the SDGs, Post 2015 Development Agenda, UNFCCC and ICPDBeyond 2014 is validating wrongful decisions made by powerful states and companies in their intention to enslave the resources of the less powerful.

Due to the extractive foreign industries using the land of Guatemala, indigenous women are being deprived of their basic right to enjoy life, having to walk up to four hours a day in order to get 2 gallons of water. According to Norma Maldonado from NGO Tierra Verde, “Indigenous women in Guatemala have to walk from two to four hours each day to get drinking water, and there is no time to think about education or participate in any public processes… I have to support my mom and myself and get up each night at 3 a.m. in order to collect water, because there is no pressure in the water pipes as all the water is being used up by the industry… the mining industries uses tons of cubic meters of water per minute, leaving the women and children on the verge of dying“.

Young environmentalist from the Global Forest Coalition in Colombia, Isis Alvarez, is bringing the growing  agro fuels problematic in Latin america depicted in the specific case of Colombia. “The large-scale agrofuel production in Colombia negatively impacts the livelihoods of rural and indigenous women in the country. Impacts coming from land use change are displacing entire communities with detrimental effects on women as they are confronted with direct and indirect violence of companies that try to grab their lands. This ‘green land grabbing’ is a major cause of violations of their social, environmental and human rights”.

The nuclear arms race during last century and the ambitious plans of major powerful countries of the world have been poisoning the lands and crippling societies in Central Asia, especially Kazakhstan. With the radioactive fallout from 456 nuclear weapons tests in Semipalatinsk have led to damage equivalent of over 2500 bombs dropped on Hiroshima. After gaining independence Kazakhstan announced itself as a “nuclear-free state”, however, the economic and political pressures from major empires, and the ambitious plans of the government in the mining of uranium and production of nuclear power are putting the Kazakh population under the risks of further poisonous contamination for millions of years. Today Kazakh women are still suffering from the deadly radioactive contamination, both of natural and anthropogenic nature, and are unable to enjoy the rights pronounced by the international conventions.

In the observation of Elina Doszhanova, a Kazakh woman working in Social-EcoFund NGO, “There is still little awareness within the international community regarding issues related to radiation and uranium mining. The global processes tackling global economic development have not yet improved the lives of Kazakh indigenous women and there is little hope that this CSW57 decisions will bring much improvement in the livelihoods of impoverished Kazakh women surviving in the poorest parts of the country. We are proud to be a nation with much wealth underground, but we’d rather have it stay untouched and undeveloped… We need to recognize that the issues of gender equity and economic sustainability closely relate to environmental issues, and thus we have to ensure sustainable development that is based on principles of human rights and environmental justice for present and future generations”.

Noelene Nabulivou of Development Alternatives for a New Era (DAWN) and DIVA for Equality, of FIji, affirmed the importance of the CSW57 Outcome Statement, and called for strongest defence by States and civil society of the SRHR language in the Outcome document text. She also called for specific language on early and forced marriage, on sexual orientation and gender identity, and for protection for all Women Human Rights Defenders at the frontlines of defence against much of the interlinked bodily, social and structural violence facing communities in the economic south and north. She affirmed the historical moment of this CSW57 on addressing all forms of sexual and gender based violence, and discussed the interlinked nature of economic, ecological, ecological and erotic justice, and need for more analysis, advocacy and supportive UN texts to reflect the same. Noelene and many others in the room strongly affirmed the importance of the work of the Women’s Major Group, feminist alliances, with its wide and intergenerational constituency of women advocates from across the world.

These arguments have quite vivid evidence from the recent history. It’s been just over a year since the disaster at the Fukushima nuclear power plant, however, the world community seem to have a very short memory.  “We need to recognize that someone has to pay the price, and everyday more and more lives are being put into risk due to existing world order. We are already creating the new paradigms for development” according to the women.

Their stories portray how unsustainable economic activities are impacting on the lives of women across the world, and making it impossible for them to have access and enjoy the rights and freedoms set forth by high-level Forums such as the CSW. This is why CSW57 must strongly affirm State commitments to gender normative frameworks and women’s human rights, and move into a strong Post 2015 Development Agenda and SDGs process that is transformative and enabling for the lives of all women and girls.

The CSW57 was created just two years after the establishment of the United Nations, in 1947.  The development of an international legal framework on women rights started more than half a-century ago, however in 2013 and beyond many women and other marginalized groups are still ignored and disregarded by their own governments. This requires mobilisation and strategy, and women working together across the world.

Moderator Sascha Gabizon of WECF International, and co-chair of the Women’s Major Group proposed to bring recommendations on addressing root causes of violence from unsustainable economic activities to the post-2015 and Sustainable Development Agenda.

For more information on the work of the Women’s Major Group, including a position paper by the women’s major group, please see our website: www.womenrio20.org 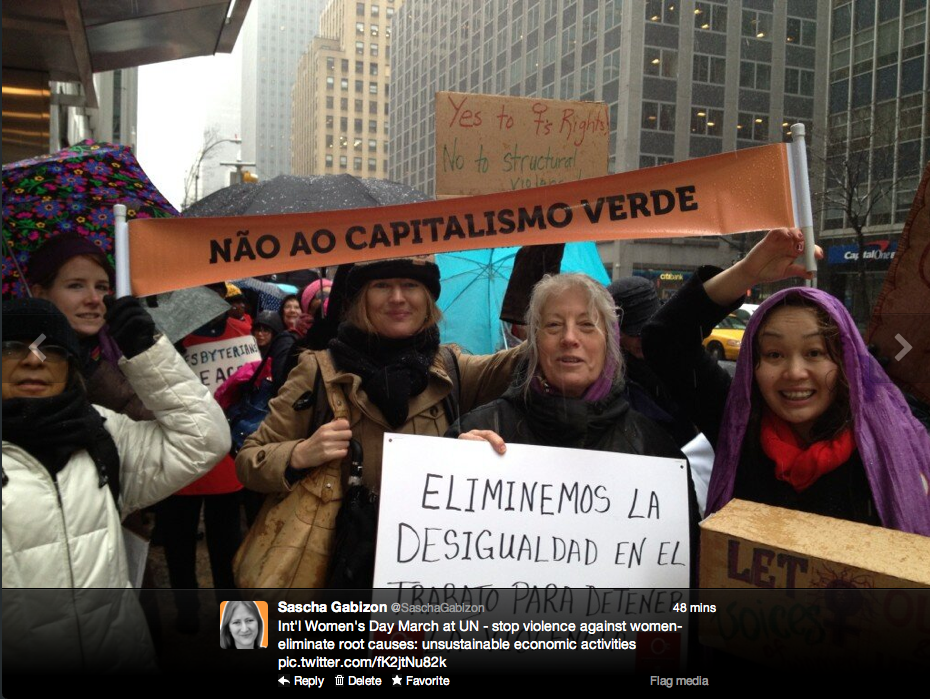