Building autonomous and sustainable territories: spaces for international dialogue and local advocacy for the promotion of responsible governance

On April 8-9, 2015, the local Government of the Azuay Province (Ecuador) carried out a workshop-seminar on autonomous and sustainable territories at the Cuenca University. Different national and international actors ranging from academia, social movements, NGOs, governments and more, participated in the event that looked at the different aspects for the realization of autonomous territories based on a radical democracy framework.

Thus, the provincial government of Azuay, NRG4SD, University of Cuenca – Gender Program, and UNDP, sponsored the event while recognizing the need for addressing new ways leading to an inclusive governance of territories that is strengthened by the diversity of social actors and from spaces given for reflection, analysis and the definition of wellness indicators. They intended to receive feedback that could facilitate the empowerment of the people over their territories while promoting reciprocity, gaining autonomy for contributing in government decisions, including the responsible use of natural resources. A special emphasis has been given to rural areas where strategic actions are developed in order to protect the commons such as water streams, forests, and food sovereignty.

The Network of Regional Governments for Sustainable Development (NRG4SD) – one of the co-sponsors of the workshop/seminar – is actively involved in one of the 9 Major Groups present at the different United Nations processes related to Sustainable Development – the Local Authorities Major Group; they have been promoting international meetings related to the above-mentioned topics and currently, actively engaged in the discussions of the post-2015 agenda, including the identification and formulation of indicators for the Sustainable Development Goals (SDGs). The Global Forest Coalition (GFC) was invited as a representative from civil society and to share its expertise from the Women’s Major Group (WMG) experience; given the pertinence of the topics, GFC’s presentation also emphasized in the governance figure of Indigenous Peoples and Local Community Conserved Areas and Territories (ICCAs) which has been promoted by the WMG throughout the Open Working Group sessions on SDGs. 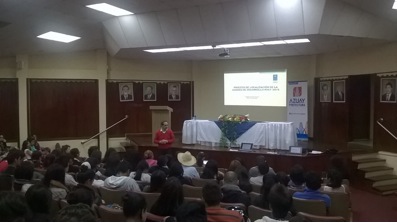 On Day 1, the workshop started with presentations from the invited speakers. In her presentation, Isis Alvarez from GFC included a description of the Women’s Major Group’s work around the SDGs and post-2015 processes, focusing on Goal 5 on Gender Equality and Goal 15 on Ecosystems & Biodiversity and linking it to the concept of ICCAs and how legal recognition could help leverage appropriate governance including good conservation practices. It was recognized that very little consideration of local communities and indigenous peoples issues are contained into the different local government agendas in general, thus ICCAs could turn useful for achieving the goals at different levels regarding autonomy and participation, for instance.

– Giovani Yachakaquin from the Ancestral Agriculture School SAMI YAKU who described their experience based in Salinas de Guaranda, Ecuador;

– Pedro Arrojo from CENAGRAP who spoke via teleconference about public goods and the public-community initiative of territory sustainability;

– Freddy Congo from La Via Campesina;

– Xavier Carrera from Guardianes de Semillas speaking on different experiences of community solutions for food sovereignty including initiatives for ‘solidarity-based economies’ and an interesting initiative of biological control of weeds by keeping wild ducks. The differences between agro-ecology and permaculture were explained;

– Maria Elsa Viteri on solidarity economies as an axis for sustainability in territories;

– Cecilia Mantilla from the Pedro Moncayo experience at the Universidad Andina on the social management for sustainable autonomous territories.

In the evening the Azuay prefect Paúl Carrasco – who has been appointed for three consecutive periods – organized a dinner-meeting with the presenters; he explained the different local government plans for a wider democracy that can reach and involve the local population in plans for governance, a solidarity based autonomy, a solidarity-based economy and support to small-scale food producers, environmental sustainability, and solidarity-based management. In this context, it is important to highlight the city of Cuenca’s experience in recovering their watersheds; four main water-streams cross the city of Cuenca and different government plans have lead to the cleaning of these water sources. Such results have been based on the local government’s dialogues and inclusion programs that generated people’s feedback to their development plans.

On Day 2, there were separate roundtables that addressed the different dimensions of autonomous sustainable territories, recognized as:

The roundtable on ‘Diversities and Territories in the Construction od Autonomous Sustainable Territories’ followed a set of guiding questions. The Conclusions are as follow:

1) Dialogue as a positive way through, getting to know diverse experiences from all different actors. In some cases, local governments (or parishes) play an important role as a mediator bridging resources allocated by law to Parishes Boards, an opportunity for territories. However, this can fall into partidisms thus, how could organization of individuals be supported?

2) Social organization is crucial in these processes, it has not been the case withstate actors who shoul not co-opt nor interfere in the processes that have emerged from the community; leaders emerge as part of the social mechanism for self-organization, in all areas

3) Directed and limited capacity building as frequently communities are imposed to capacity building processes that disregard community needs and requirements; even the academic sector has been an actor in the dispossession of community knowledge as their position is usually coming from western imposed concepts .

1) Decisions taken need to be binding in the implementation of strategies that are defined for the development of the territory; boards can channel resources from other actors, should develop management skills with the aim that the grassroots organization has clarity on where to go to facilitate support
2) Dialogues that take place on territory issues muust happen in the territory itself
3) Evaluate the process of self-education that have plenty of life experience and that provide the tools to strengthen these processes
4) That the Parish Governments can transparently and sustainably assume development processes in their territories in the exercise of clear competences
5) It is necessary that the state with its different levels has coordinated to support these processes in the territory
6) Evaluate the existing legislation (Decree 16, on individuals) and strategies of other countries to promote effective access of civil society to the state funds in order to support the processes and initiatives from all diversities
7) Access to timely, adequate and effective information
8) Identify gender roles and how it influences the management of the territory, its impact on individuals and societies
9) Generate indicators that make visible the different livelihoods of all diversities in territories, indicators created from territorial realities and its actors.
10) Appreciate the different forms of autonomy (individual, collective, territorial)

The roundtables concluded and a meeting of the organizing team followed where a set of steps forward were discussed.

*This document was written by Isis Alvarez based on the Memories of the Workshop/Seminar prepared by the Azuay Prefecture, NRG4SD, University of Cuenca – Gender Program, and UNDP.