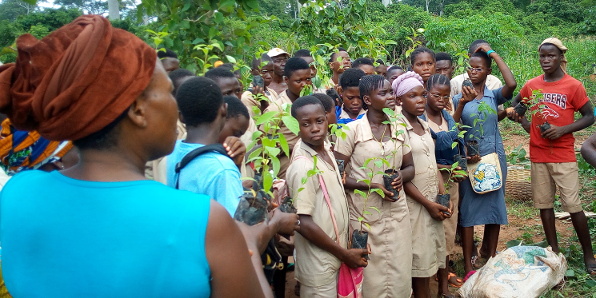 Promoting a gender-based approach to the restoration of the sacred Têdozoun forest, Benin. Photo: AMAF-Benin

The Global Forest Coalition is launching four brief alternative country reports at this year’s United Nations High Level Political Forum (HLPF), currently ongoing in New York. The reports highlight concerns and recommendations regarding the progress made on SDG 15.2 on halting deforestation through a gender lens.

The reports provide a concise and targeted analysis in Armenia by member group Armenian Forests, in Paraguay by HENOI, in Benin by Amis de l’Afrique Francophone Benin (AMAF-BENIN) and in Colombia by the Global Forest Coalition. The HLPF is the annual platform for the follow-up and review of the Sustainable Development Goals (SDGs) that brings government and non-government representatives to discuss the challenges and successes in implementation of the goals so far.

In 2018 the SDGs under review include: SDG 6 water and sanitation, SDG 7 energy, SDG 11 resilient and sustainable cities, SDG 12 sustainable consumption and production, SDG 15 forests and biodiversity and SDG 17 means of implementation. This year 47 countries will also be presenting their Voluntary National Reviews, including Armenia, Paraguay, Benin, Colombia, which are country-driven reviews on the progress made at the national and sub-national levels. With these reports, GFC aims to bring to the fore the key perspective and recommendations of forest-dependent communities and women in implementing SDG 15.2.

In Armenia, deforestation is being driven by agriculture, logging for firewood, mining and construction; the key recommendations proposed include strengthening monitoring mechanisms for forest protection and prevention of illegal logging, as well as promoting campaigns around gender equality, girls’ leadership and women’s participation in politics and community decision-making bodies.

The analysis in Paraguay found that productive practices that dominate the country’s economy have generated globally unprecedented rates of deforestation as well as poverty and migration, with a particularly severe impact on women and girls.

In Benin, agriculture, timber export and firewood-use underpin deforestation where women bear a disproportionate burden as a result. Key recommendations include involving women in decision-making, increasing access to information for the public and supporting civil society monitoring.

Lastly, the Colombia report points to the correlation between the end of the armed conflict and the increase in deforestation rates. The government also shows a lack of political will to synergise the implementation of Agenda 2030 and the implementation of the Peace Agreement, which acts as a key barrier to achieving genuine sustainable development.