The first of a series of regional dialogues on Alternatives to Unsustainable Livestock Production took place on 2 September 2019 in Addis Ababa, Ethiopia, at the 3rd African Animal Welfare Conference. It was organised by GFC in collaboration with Brighter Green and the African Network for Animal Welfare and attended by more than 90 people from all over Africa and beyond.

The event was moderated by Kahindi Lekalhaile of the Africa Network for Animal Welfare (ANAW), who is a member of the Samburu tribe in Kenya, a people that has a deeply rooted traditional pastoralist culture. He highlighted amongst other issues how the climate resilience of traditional sheep breeding had been undermined by the introduction of new breeds by the government that were supposed to be more productive, but were actually more vulnerable to droughts.

After a brief introduction to the objectives of the event by Simone Lovera of GFC, Mia MacDonald of Brighter Green presented a brief overview of some of the overall impacts of both unsustainable livestock production, including its impacts on forests, climate change, animal welfare, health, food sovereignty and the lands and territories of Indigenous Peoples, local communities and women in general.

Tozie Zokufa of the Coalition of African Animal Welfare Organisations in South Africa talked about the impacts of unsustainable livestock production in Africa. He emphasised it was important to know how your food is produced and to act upon the relatively new knowledge of some of the impacts of unsustainable livestock production.

Zelealem Tefera, honorary member of the ICCA Consortium in Ethiopia talked about the importance of territories and areas conserved by Indigenous Peoples and local communities (ICCAs), including in particular traditional pastoralist communities, and how ICCAs in Ethiopia are threatened by the expansion of agro-industry, including the large-scale production of crops like sugar cane.

The brief introductions were followed by a lively dialogue between a large number of participants who highlighted links with the need to change food consumption and production patterns in general, the need to redirect perverse incentives, and the need to ensure governments provide proper public services in rural areas so that rural communities can survive without having to exploit their natural resources in an unsustainable manner.

There also was a lively discussion about the best way to convince consumers to change their diets. Some felt improving animal welfare in existing livestock production was the best strategy, while others argued there was a need for more respect for animal rights and a more rapid shift to plant-based diets. But all agreed there was a clear need to halt and reverse the expansion of intensive livestock farming.

Read our report on the dialogue here.

Based on the outcomes of all three regional dialogues on alternatives to unsustainable livestock farming we have also published the following report: 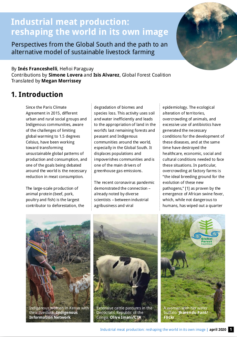 On International Day of Peasant Struggle 2020 we were delighted to launch a new report that focuses on a key threat to the livelihoods and food sovereignty of peasant communities worldwide: the industrial livestock industry. Our new briefing looks at the global impacts of this destructive industry and southern perspectives on alternative, more sustainable models of food production. The briefing summarises the lively discussions and outcomes of three dialogues on unsustainable livestock farming and its alternatives that took place in Addis Ababa (Ethiopia), Santiago de Chile (Chile) and Bogor (Indonesia) in 2019 and early 2020. During these dialogues, representatives of CSOs, Indigenous Peoples and community groups came together to share experiences and strategize on how to reduce the impacts of a production model that destroys ecosystems and communities, and increase the resilience of alternative models that sustain the livelihoods of peasant farmers and protect biodiversity.