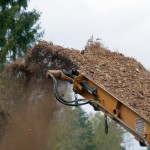 In May and June 2010, GFC organizes a European tour on the impact of wood-based bioenergy on forests, forest dependant people and the climate. Bioenergy is expected to meet most of the EU’s 20% renewable energy target. Much of this will come from burning wood in dedicated power stations, co-firing with coal and domestic wood boilers. A growing proportion of the wood already does not come from true residues but from trees cut down for this purpose. Companies are increasingly looking for imports to meet the new demand. The European paper industry has already pointed out that there will be need to significantly increase wood imports if a large part of European wood is destined for bio-energy, and Mc Kinsey has calculated there will be a gap of 200 -250 million cubic meters between European wood production and demand if the current bio-energy targets are maintained.

For dates and programmes, check: https://globalforestcoalition.org/paginas/view/244