Don’t Trade away our Land and Forests for Carbon Offsets!

A brief report on the Global Forest Coalition activities in the road up to and during the COP21 in Paris, France

On the Road to Paris

GFC has had a long history of actively participating in actions whether inside or outside the meetings of the United Nations Framework Convention on Climate Change (UNFCCC), seeing how several areas of the negotiations impact forests, biodiversity, Indigenous Peoples, women and forest communities.

At the Bonn intersessional last June, we organized a side event on “Hot Air, Fake Renewables and Forest Destruction: How Bioenergy Undermines the Paris Agreement” which was well attended and covered by the IISD reporting services. 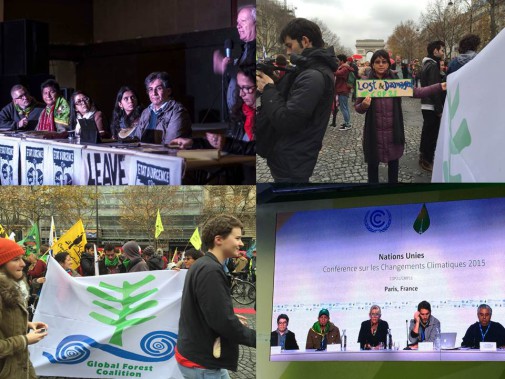 We then attended the next international meeting held in Paris in June where we presented our positions on the draft text that had then just come out from Bonn. We raised alarm bells on the dangers of “net zero” and opposed any inclusion of land use in accounting mechanisms that would allow for more cheating and escaping of responsibility. We also spoke at the public assembly hosted by AITEC and Coalition Climat 21 on the linkages between free trade and climate change and why it was crucial for the movements on both issues to coalesce and work together to block the proposals for even more market based “solutions.”

We also actively participated in the Women’s Global Call for Climate Justice, through various online actions prior to Paris and actions during the COP21.

At the third international meeting in Paris organized by Coalition Climat 21, GFC again participated and presented our messages and positions on land use, bioenergy and also signed on the the Climate Space statement denouncing the corporate interests enshrined in the draft Paris text and called for system change.

In October when the latest texts had come out, we released our analysis on how the proposals on the table would see the planet burn: “The coming tragedy of Paris: A disastrous climate deal that will see the planet burn” which was widely shared in English, Spanish and French across social media, listserves and was picked up by a number of media outlets.

Then in November, a few weeks before the COP21, we released our position paper, elaborated and approved by the Membership, on “Land Forests and Hot Air” which provided a critical overview of the problem of current carbon accounting rules in the land use and forests sector and how these would further create loopholes for real emission cuts and, thus, would undermine any new climate agreement.

GFC went to Paris with a small delegation from various countries including Uganda, Philippines, India, Russia, Paraguay, Australia and several European countries to participate in the COP21 and related civil society events from November 30 to December 12, 2015. We went to denounce a false Paris climate deal. In particular, we called on governments to recognize the problems of the net zero approach and especially the dangers of inclusion of land use related emissions and emission reductions in carbon markets. Already a loophole by itself in the flawed accounting approaches it proposes, combined with market mechanisms this approach will create an entire new grab for land as it creates a REDD+ (Reduction of Deforestation and Forest Degradation plus) type mechanism for agriculture and soils. We also sounded the alarm bells around how this will open the door to corporate-driven Climate Smart Agriculture.

Particularly on the issue of bioenergy, GFC launched in Paris a report, “Biomyths: The costly carbon scam of bioenergy.”

GFC also went to raise awareness and expose the devastating impacts of the industry of unsustainable livestock and feedstock production and how there are viable and alternative solutions from small farmers, peasants, pastoralists and indigenous communities. We organized several public and other strategic meetings in this respect, both inside the official Conference and at the different alternative spaces organized by civil society and peasant movements.

Most importantly, we went to defend real solutions and push for system change to resolve the climate crisis. These solutions, alternatives and cohesive strategies by impacted communities and nations, various social movements and local struggles already exist and need to be supported.

All throughout Paris, GFC worked in a collaborative manner with several allies including the Women’s Major Group, the Climate Space, Coalition Climat 21, La Via Campesina and many others. We co-organized and spoke at a number of press conferences inside the UNFCCC, one with the Women’s Major Group and one with the Climate Space, again, always reiterating our core messages.

Also, despite the security tensions surrounding the public demonstrations, GFC delegates went to show solidarity with the thousands others who were denouncing the Paris deal for condemning us to a 3+ degree world.

We strongly oppose the bad deal that the COP 21 produced. The deal as it stands today has been captured and co-opted by corporations, allowing them to wear green masks, promote false solutions like carbon markets, REDD+, Climate Smart Agriculture as well among others to continue business as usual instead of cutting emissions deeply at source. The over reliance on unviable and dangerous techno fixes like industrial bioenergy, manipulation of the atmosphere and other forms of geo-engineering, are unrealistic and will push us further into evading emissions cuts. The future of the humanity and our planet is at stake and so while Paris may be over, the struggle for Mother Earth and humanity still goes on.

Here is an overview of our events held in Paris both at the inside and outside spaces: 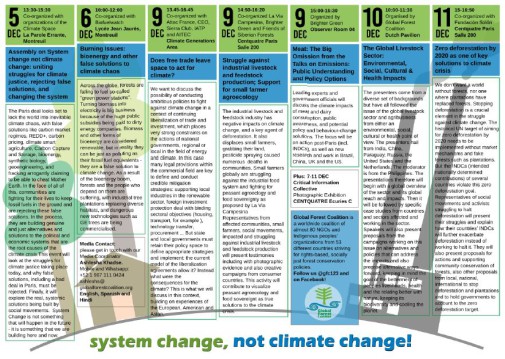