By the Global Forest Coalition. This photo essay was originally published on Toward Freedom.

21 March 2018: Today is the international day of forests. The United Nations General Assembly designated this day as such with the hope that humankind would raise awareness about and celebrate forests. This year’s theme is “Forests and Sustainable Cities”. It seeks to inspire us to make our cities greener and healthier. By 2050, the number of people living in cities will rise to 6 billion, and so will their consumer demands upon forests. We need forests for our survival- provide food, energy, clean air, and especially water. Without healthy forests, we would not have access to clean water as they are critical to maintaining watershed areas.

As we celebrate the importance of forests for the future of our cities, let us also turn our gaze toward the man-made threats that our forests constantly face because of growing demands for commodities like wood, meat, pulp, or energy. Let us also remember the people whose homes are forests, especially Indigenous Peoples who have taken care of forests for ages and whose lives and rights are innately linked to forests. 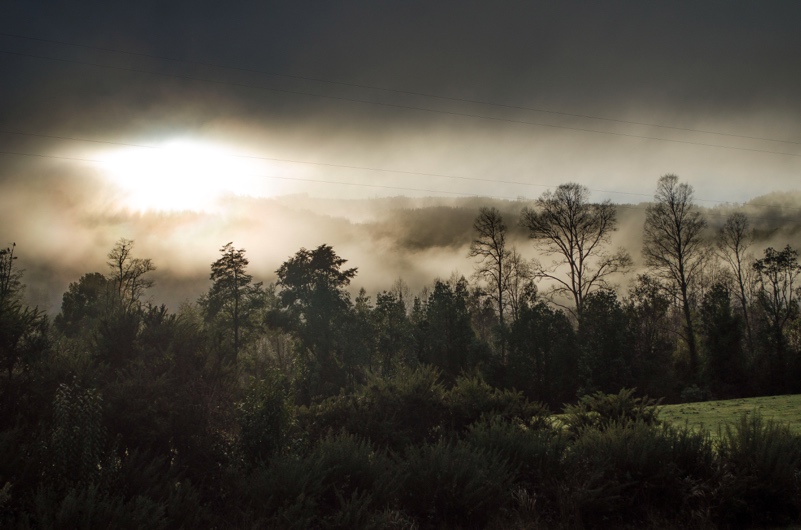 Forests provide sustenance – Pictured here is a scenic native forest in Chanlelfu in the Araucanía Region of Chile. These forests are part of the territory of the Mapuche Indigenous Peoples. The forest is an essential source of sustenance, livelihood, food, medicine, identity, and spirituality for the Mapuche. Photo by: Carolina Lagos, Chile 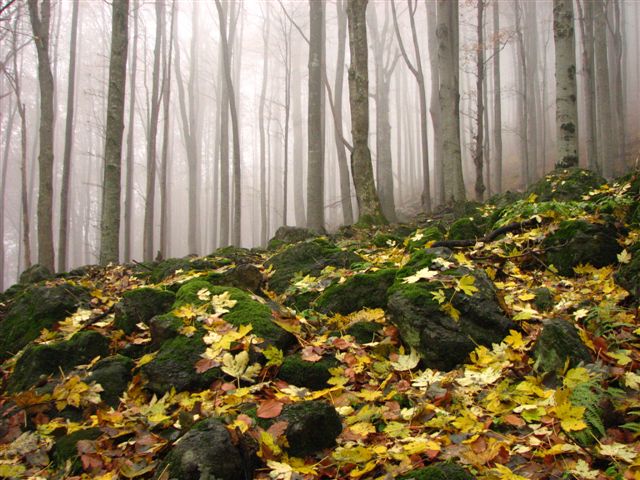 Forests are home to biodiverse life and are Mother Earth’s lungs – These are beech forests in the Central Balkan National Park in Bulgaria. Forests are important holders of biodiversity which is crucial for the animals, plants, and fungi that depend on them. Forests provide key ecological functions like purifying the air, soaking up carbon dioxide, recycling water and regulating temperature. Photo by: Georgi Ekov, Bulgaria 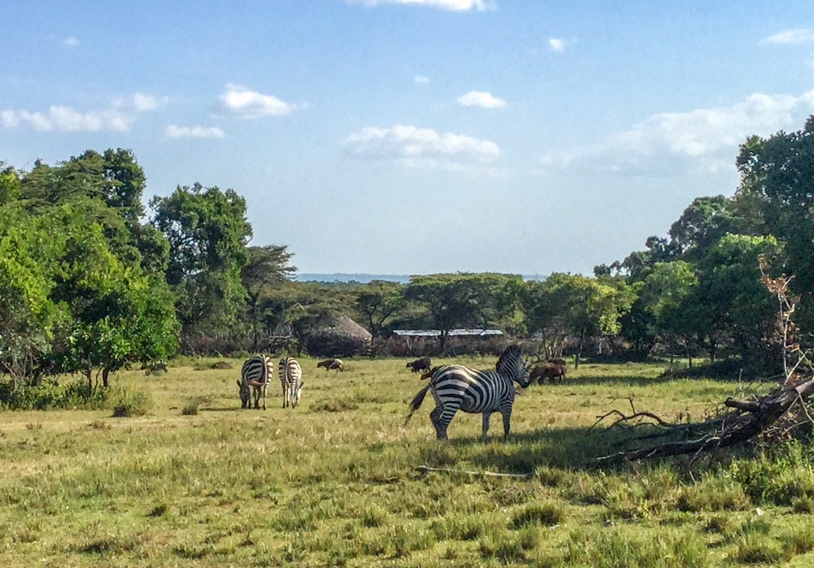 Forests are a source of beauty and spirituality – This is the Nyekweri Kimintet Forest in Kenya. It is one of the last remaining indigenous-controlled forests in the Trans Mara area near the Maasai Mara National Park, which has some of the world’s most stunning wildlife. This forest is home to buffaloes, elephants, waterbucks, impalas, and leopards. More than 200 species of birds including Turacos, Trogons, Eagles, Wood-hoopoes and Hornbills live here. The predominantly Maasai Indigenous Peoples here have co-existed with wildlife and the forests for centuries. The forest is their home, it hosts their spiritual sacred sites, provide medicinal plants, honey, fodder for livestock, building materials, and wood fuel. The community members here donated their private lands and created the 6,000-acre, Indigenous-managed Nyekweri Forest Kimintet Trust in 2005 to conserve the forests and wildlife in this area. Photo by: Edna Kaptoyo 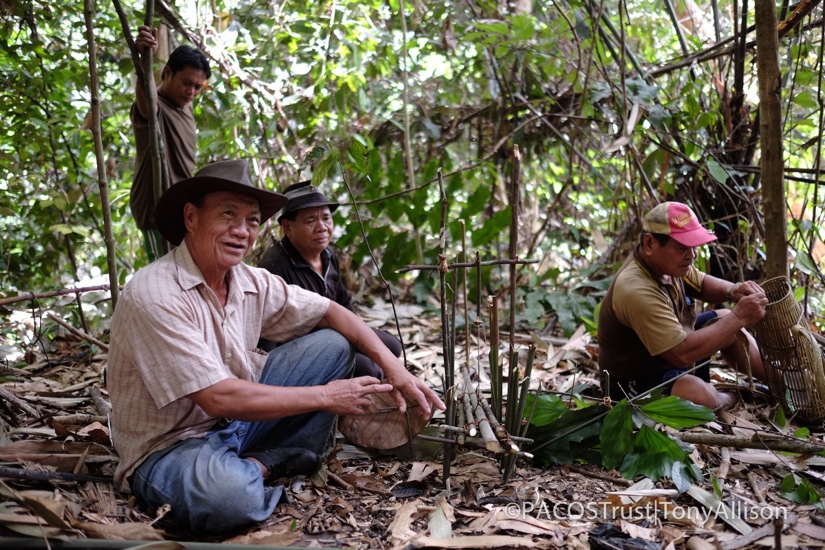 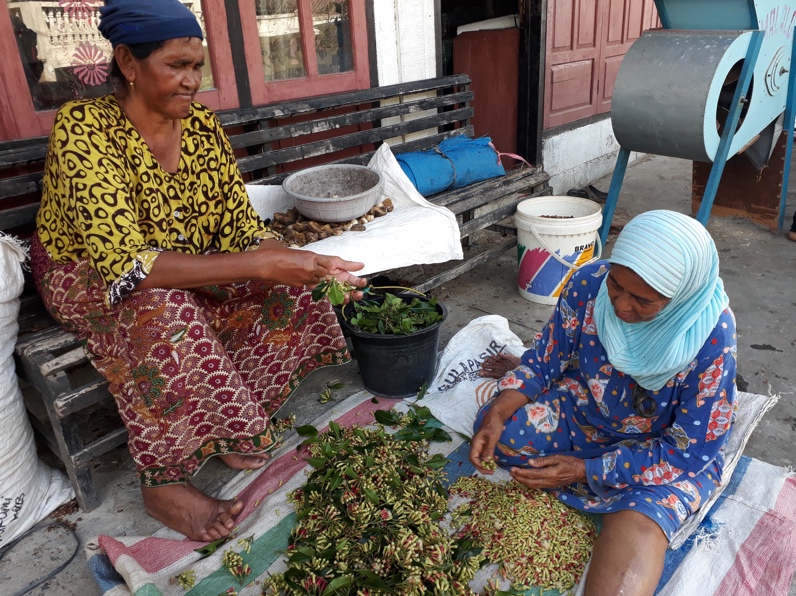 Forests empower women – These women are processing cloves and coffee. They are indigenous women from Tanah Datar in West Sumatra, Indonesia. These women are part of a women’s group, which sustainably produces coffee and cloves at a small scale, and conserves the health of the forest areas. Such produce provides an important livelihood for these women. The recognition of their customary rights to the land is an important step in conserving forests. Photo by: Chaus Uslaini, Indonesia 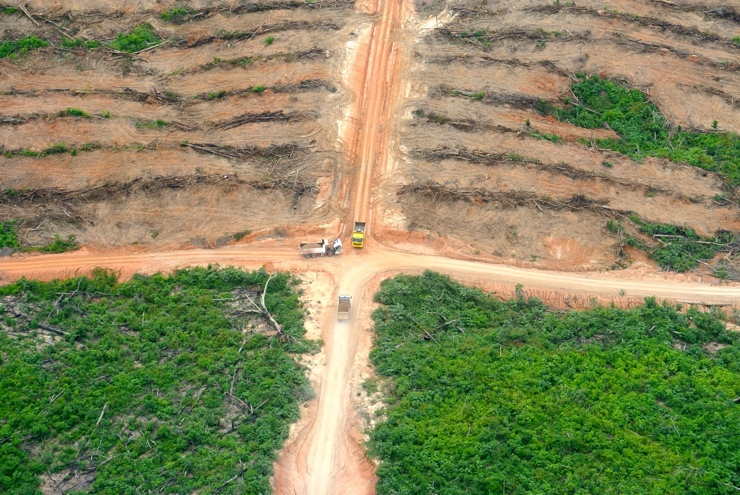 Deforestation for palm oil in Peru – Growing commercial demands are putting a huge strain on our forests. Palm oil is one of the worst culprits and a leading driver of deforestation. It is ubiquitous- found in soap, shampoo, chocolate, and so many other consumer products. Huge swathes of forests are being cleared for palm oil plantations. In Indonesia 300 football fields of forest are cleared every hour for palm oil. A large number of species living in these rainforests are becoming threatened. Photo by: Mathias Rittgerott/Rainforest Rescue, Germany 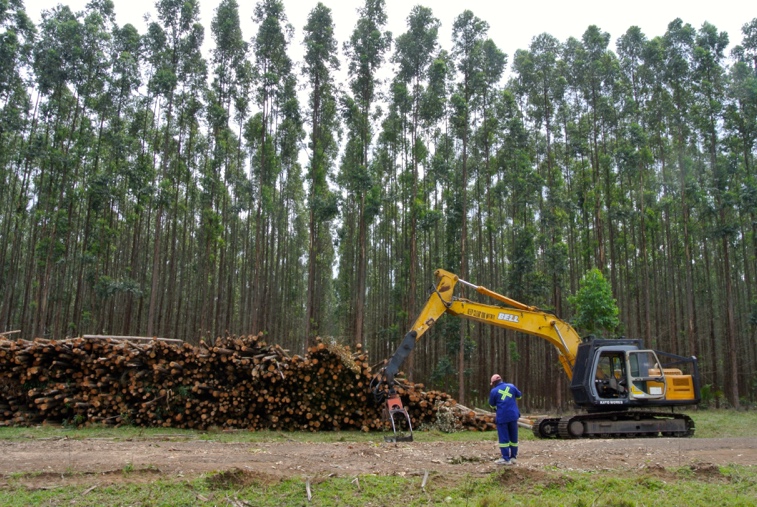 Plantations are not Forests – Monoculture tree plantations like these eucalyptus farms pictured here from South Africa are a big threat to forests and a driver of deforestation. Unlike natural forests which are biodiverse and provide a habitat to a web of life of many species of plants and animals, these monoculture plantations support barely any life. These are typically large-scale intensively managed plantations with endless rows of only one species- mostly exotic fast-growing trees like pine or eucalyptus among others, destined for industrial production of commodities like paper or palm oil. They suck the groundwater up, leaving barely anything for animals and people living nearby. The UN Food and Agriculture Organization considers such plantations to be forests, on a par with real forests (as its definition of forest only considers tree cover and height rather than the other critical functions). But people around the world are demanding that the UN reconsider its definition and stop incentivising commercial plantations which have been expanding rapidly under the guise of “reforestation” and “forest restoration” at the cost of real forests. Photo by Mathias Rittgerott/Rainforest Rescue, Germany 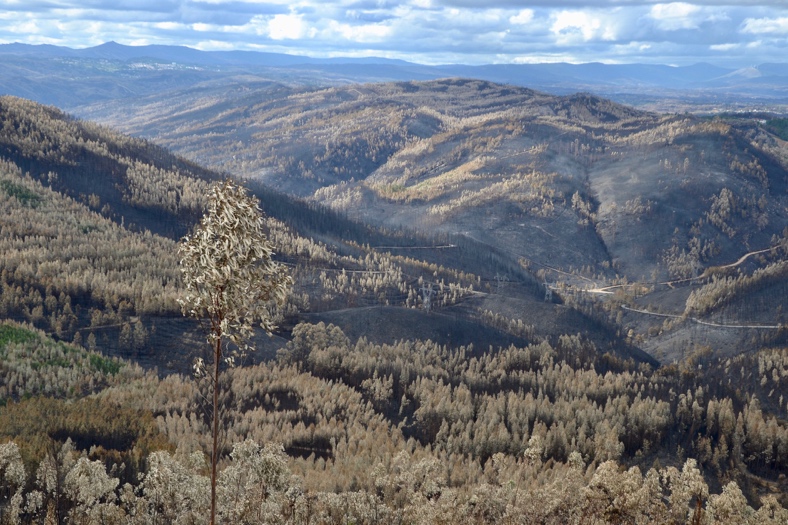 Industrial tree plantations a major factor in unprecedented wildfires in central Portugal – 2017 saw the worst wildfires in Portugal in living memory. More than 100 people died over a fire season that spanned five months, with 6% of the country’s land area burning, and destroying thousands of houses and workplaces. Extreme drought conditions and heatwaves made more severe by climate change, coupled with vast areas of unregulated, highly flammable eucalyptus and pine plantations, turned Portugal into a tinderbox that exploded like never before. Proportionately, Portugal now has more eucalyptus than anywhere else in the world. Photo by: Margus Kurvitis 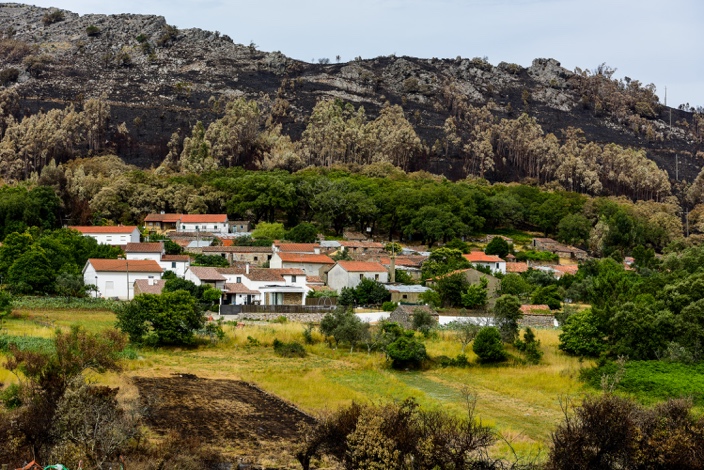 The destruction caused by the fires in Portugal last year made it even clearer to communities just how quickly and dangerously plantation trees spread fire, whilst native and deciduous trees slow it down. Places that survived the fires, such as the village in this photo, were often surrounded by a protective barrier of native cork oak trees, or other less fire-prone species like chestnuts. As a consequence of this, many places are now digging up eucalyptus trees near villages and replacing them with a diversity of broad-leafed species. Photo credit: Nuno Antunes/Revelamos 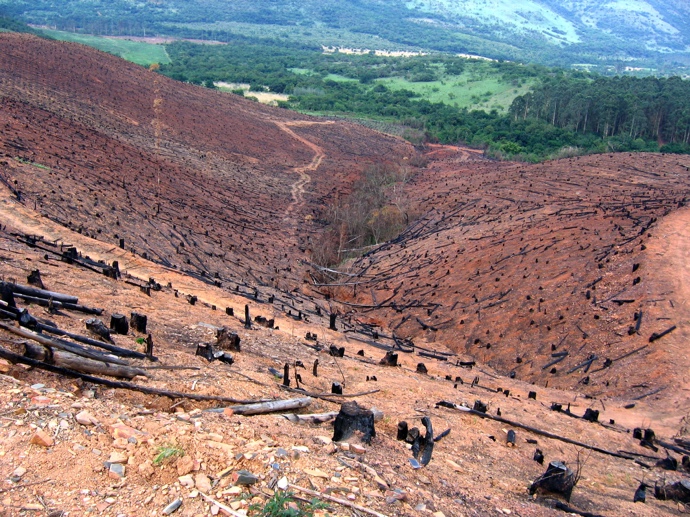 “Certified” forest products are not the solution – Pictured here is a “certified” plantation by the company Sappi in South Africa. Such certification schemes were launched in response to people’s growing criticisms of unsustainable forest products. This plantation was certified by the Forest Stewardship Council (FSC), a multi- stakeholder body that guarantees responsible management of forests- ensuring that forest products are produced in an environmentally and socially responsible manner. But when FSC ‘certifies’ a forest product it does not mention that the product does not come from an actual conserved forest but from a highly destructive commercial plantation. The remains of this plantation for example show that the topsoil is destroyed. Activists question what will happen to the rest of the forests if such plantations are allowed to spread across the landscape. Many local farmers have had to stop farming because such plantations have depleted water tables. Photo by Wally Menne 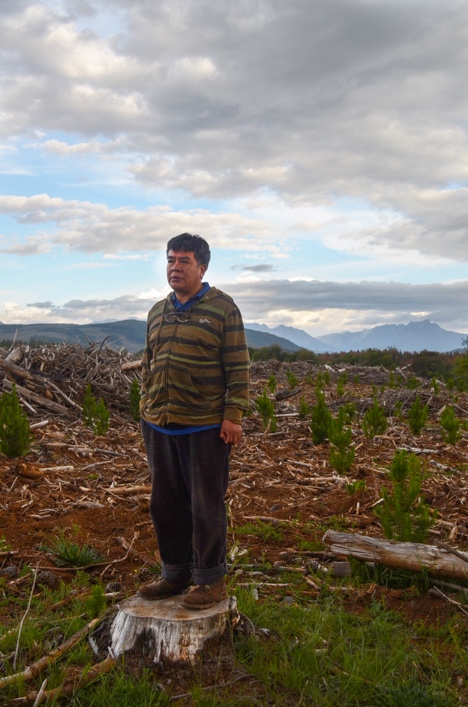 Don Pedro Suarez, a Mapuche, observing the deforestation and plantations surrounding his community in the Bio-Bío region of Chile – These are causing biodiversity loss and water shortages making the future uncertain. Along with his community, Don Pedro has been in a long struggle against forestry, pulp and hydropower companies in order to protect their territories, their way of life, and their sacred sites. Photo by: Carolina Lagos, Chile 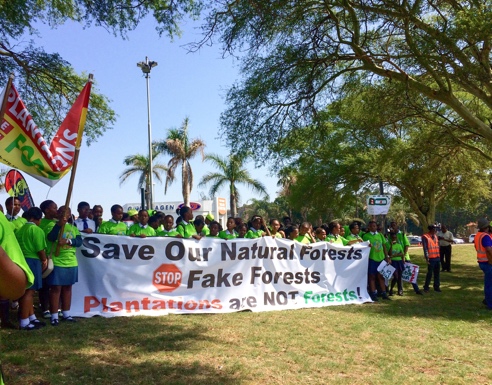 School children in Durban, South Africa carry out a march for natural forests – These children sang and danced and reminded everyone that they don’t want a word with plantations and fake forests but want to conserve real forests.