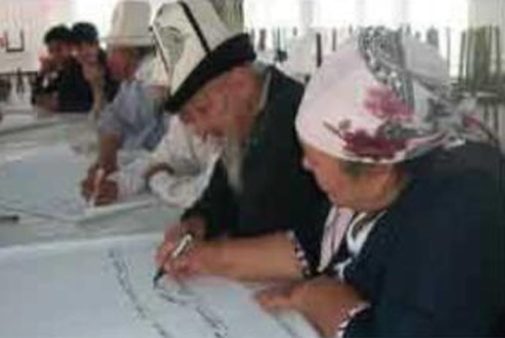 Mapping of the threats to Kashka-Suu village by local activists. BIOM/GFC

Three local communities participated in the CCRI initiative in Kyrgyzstan. All are located in close proximity to, or within the territory of, protected nature reserves. They live close to forested areas and have experience in conservation.

Shabdan village, Chuy Oblast is near the 500 ha National Park Chon- Kemin, established in 1993. The valley’s extensive wildlife includes six species of plants and 21 species of animals listed in the Red Book, including snow leopards, ibex and golden eagles, and there are coniferous and mixed forests [1]. Villagers are obliged to get permits from the Forestry Department to use wood and non-wood forest products, such as mushrooms, berries and medicinal plants. Grazing cattle is similarly regulated with special ‘pasture tickets’.

Zhyrgalan village is near Yssyk-Kol Oblast, a State Nature Reserve and on the border of the UN Biosphere Reserve with both lake and terrestrial ecosystems. The villagers were mostly engaged in coalmining until the Soviet Union collapsed, after which they switched to livestock farming, hunting and wood processing. There are few pastures in the village and the main pastures are rented from the State Forest Fund.

Industrial-scale felling is prohibited, and special permits are required for hunting.

The village of Kashka-Suu in Dzhalal-Abad Oblast is located next to Padish-Ata, which is another State Nature Reserve and was included in the UNESCO World Heritage list in 2016. The 30,560 ha reserve was established in 2003 to preserve natural juniper forests and the country’s endemic Semenov firs. It is home to seven species of plants, three species of mammals and four species of birds listed in the Red Book. The sacred Muslim shrine Mazar Padish-Ata is situated here, and according to legend, Said Khamid ibn Salmani Farsi lived in this territory in VI-VII centuries, preaching Islam as a representative of the Arab Padishah [2]. In 2007 cave drawings (petroglyphs) were discovered, indicating hunting scenes, signs of the sun, biodiversity and objects of daily use. There are also some 25 burial mounds in the territory. Cattle grazing, tree felling and hunting are prohibited, so residents organise tours to cultural and religious sites, and produce vegetables and fruit preserves.

The CCRI assessments showed that men and women have different experiences and practices in relation to the use of and conservation of natural resources. However in Kyrgyzstan the law dictates that there should not be more than 70% of citizens of the same gender involved in the use of natural resources [3]. Solutions should integrate approaches that work well for both women and men.

Although villagers are constrained by the protected area regulations, they are actively conserving their local environments. In Shabdan, for example, the community has established a wild apple nursery. The central Tian-Shan area is a zone where wild apple trees are indigenous and a number of them are included in the Red Book of Kyrgyzstan. Protecting them is important for the community because of their high levels of resistance to diseases and unfavourable weather conditions. Students from the village school have transferred fully grown apple trees to village households and planted others in the wild, and an ethnobotanical garden is being created at the village school, helping students to learn about the biodiversity in their area and how to protect and conserve it.

In Kalmak Ashu, near to Shabdan village, the local residents, mostly young people, have also set up some environmental initiatives, including an initiative to combat illegal tree felling, poaching and grazing. They cooperate with local authorities, forestry workers and the administration of the national park, and have prevented more than 100 violations. Violations of environmental regulations by local people are now quite rare.

After the failure of the coalmine in Zhyrgalan local residents often resorted to illegal logging, poaching and cattle grazing, but several families came up with the idea of developing winter tourism, and more families are becoming involved as the initiative grows. This complements summer ecotours with a particular focus on watching birds such as the cranes that nestle on Lake Turnaly in the summer time. The illegal use of natural resources has become rarer, and the population is actively conserving the forest and wildlife. Local activists are also actively discouraging poachers and the last three years have seen growing numbers of partridges, pheasants, roe deer and other species that were previously growing increasingly rare. 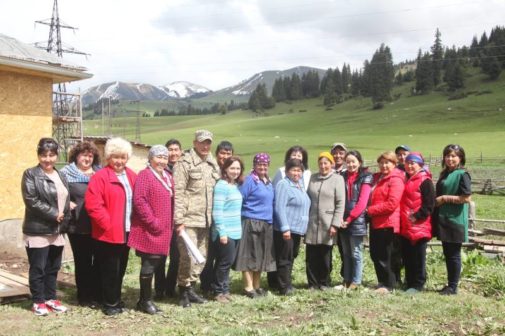 Together with Ecological Movement BIOM, young people are learning how to conduct ecosystem assessments and evaluate the local plant and animal species (particularly birds), so that they can assess the health of and protect their local ecosystem. Villagers in and around Kashka-Suu have worked hard to improve routes to the Mazar sacred sites for pilgrims and tourists. Women are well represented in the local council and women’s committees have created environmentally-oriented business initiatives. In the village and surrounding territories raspberries, alycha (wild plum) and barberries are collected and made into conserves of vegetables, berries, dried fruits and syrups to sell to local residents and tourists and for school meals. The villagers have also arranged for special protection and ecosystem restoration for a territory where a family of Indian porcupines (Hystrix indica) lives. This species is listed in the Red Book of Kyrgyzstan, and considered to be on the verge of extinction [4].

However, these efforts are all threatened by falling economic well- being and increasing competition for natural resources among the local population, leading to conflict. For example, livestock overgrazing degrades community pastures and plant life, and the ecological impacts of increasing organised and non- organised tourism (such as back-country skiing in winter time and trekking in summer time in Zhyrgalan) are not being properly researched. Recently there has been growing interest among tourists in visiting wild and pristine nature, which can have a strong negative impact on delicate natural ecosystems.

Poaching was identified as a key risk for all three villages, along with other potential risks including the intensive extraction and processing of natural resources. Local authorities also tend to ignore the interests of local residents. For example, in Shabdan village the authorities are converting part of the flood-plain forest into fish farms, causing great damage to natural flood-plain ecosystems and the biodiversity of Chon-Kemin Natural Park in general. Endemic fish species are becoming increasingly rare and profits from the fish farm are unequally distributed, with those living in Shabdan seeing little benefit. 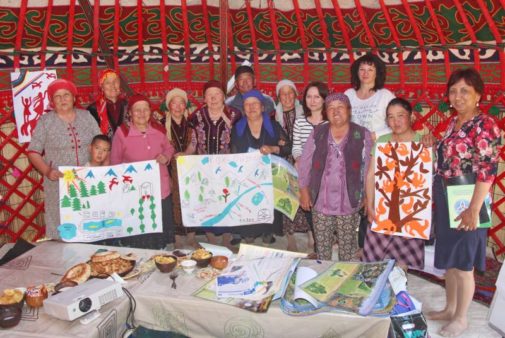 A key finding of the CCRI assessment is the need to support local communities’ involvement and participation in the state monitoring of Kyrgyzstan’s spectacular biodiversity and ecosystems, its forests, pastures and wild animals. They are interested and motivated, but constrained by the threats outlined above.

The local communities want more efficient legal instruments and better decision- making and monitoring systems based on bio- indication methods, to help them conserve their ecosystems in a way that benefits their own local development strategies (although regulations and laws are being developed to ensure local communities may organise and maintain specially protected areas themselves, through their local councils [5,6]). Community-based nature management systems, such as community-based forest management and pasture management, can also be effective ways of promoting the sustainable use of natural resources.

The communities also want education to stress the negative effects of the over-use of natural resources and promote traditional conservation practices, including through traditional folk tales and epics that relate to nature conservation (such as Kyrgyz epics Kozhozhash and Manas). Local schools should also teach about local ecosystems, how they function and can be protected.

The conservation of biodiversity and ecosystems should also be a fundamental component of socio- economic development plans at the local, district (rayon) and regional (oblast) levels. The use of bio- indication monitoring should become a decision-making tool in the field of natural resources management.

The communities want state level commitments to:
• Preserve no less than 60% of wild land ecosystems, especially forests, support the preservation of nature by communities, and implement poaching prevention programmes.
• Identify ways of increasing tourism without damaging natural ecosystems (including through smart infrastructure).
• Develop scientific regulations and environmental management
practices relating to the use of natural resources such as medicinal herbs and wild-growing fruits and berries.
• Ensure that international funds
are used effectively and achieve real environmental impacts.

Other recommendations include:
• Ensuring that the right to use natural resources goes hand in hand with responsibility and remediation, including the restoration of traditional seasonal and zonal cattle grazing systems.
• Developing local leaders’ community-based management and organisational capacity relating to natural resources management.
• Assessing and monitoring tourist load capacity in local territories.
• International efforts and pressure to ensure that the Chinese ‘One Belt One Road’ initiative includes ecological indicators and goals for biological diversity, and is not based on the transfer of dirty technologies and the destruction of natural ecosystems.

I was born and grew up in Shabdan. I have a big family – my husband and six children. I worked as a shepherd in my village for more than forty years. My father worked as a shepherd and I learned from him and my forefathers how to use pastures properly without harming ecosystems. Traditionally there were high-altitude nomadic camps in Kyrgyzstan. Pastures are divided into four types: winter, spring, summer and autumn. When has the grass done its work? Is it time to move to other pastures? Is it time to go up high to the mountains? When is it time to start grazing and when must we stop? This is knowledge that has been passed from generation to generation. All my life I have been using this knowledge, it became my profession, the work of my life. I grazed cattle and took care of pastures. Now I pass this knowledge on to the younger generation. But we see that in many places knowledge about how to use pastures carefully is disappearing. It is being replaced by unsustainable use, when people do not care about the destruction of meadows. Instead they care only for short-term profit. It is very important that the knowledge of our forefathers is preserved so we might be able to use it. Pastures are our God-given gifts and we have to live our long lives in harmony with nature and the knowledge of our forefathers.
Batma Inarbekova, Shabdan village, Kyrgyzstan

This summary is based on a full CCRI report about the communities’ conservation resilience assessment in Kyrgyzstan, which can be found here.

References
[1] https://triptokyrgyzstan.com/ru/destinations/places/nacionalnyy- park-chon-kemin
[2] Batyrbekov A, 2016. The Unique Kyrgyzstan: Reserve and Sacred Mazar Padysh-Ata. https://ru.sputnik.kg/video/20160720/1027937702.html
[3] Law of the Kyrgyz Republic “On State Guarantees of Equal Rights and Equal Opportunities for Men and Women”, 2008. http://adilet.zan.kz/eng/docs/Z090000223_
[4] Red Book of the Kyrgyz Republic, 2005, http://www.kyrgyzstantravel.info/kyrgyzstan/red_book.htm