Biofuels – a Failure for Africa 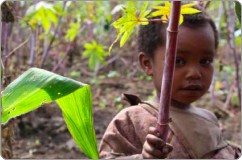 Biofuels are failing Africa, in contrast to the many promises that fuelled their growth, a new report from Ethiopia claims today.

Launched today at the UN conference on Climate Change in Cancun, the report “Biofuels – a Failure for Africa” from the African Biodiversity Network, Ethiopian Society for Consumer Protection and The Gaia Foundation, highlights the risks of relying on biofuels to bring climate and development benefits to Africa.

Teresa Anderson from The Gaia Foundation states “Much of African and international biofuel policy has been based on the assumption that crops such as jatropha curcas would produce significant biodiesel yields when grown on dry lands.  But this report finds that while jatropha is able to survive without much water, it needs rain and fertile soils in order to produce oilseeds”.

Companies are now focused on persuading local farmers to grow biofuels on their own lands, displacing food crops where there is water and soil fertility, and shifting the burden for crop failure onto the farmers.  But compared to growing food crops, the farmers complain of suffering financial losses, earning just $60 per hectare instead of the promised $400 per hectare.

The report also highlights government anger that instead of selling biofuels locally to meet Ethiopia’s domestic energy needs, companies are exporting their products for sale on international markets.  Thus biofuels are failing in the government’s own objectives towards energy security.

Anne Maina of the African Biodiversity Network adds “The UN climate negotiators must recognise that false solutions such as biofuels will further Africa’s exploitation, not salvation.  Instead we need to see real solutions to reduce climate emissions instead of more pressure on Africa”.

Gebrehemhdine Birega, Anne Maina and Teresa Anderson are in Cancun and available for interviews.

1) The report “Biofuels – a Failure for Africa” is available to download at http://www.gaiafoundation.org/sites/default/files/Biofuels_A_Failure_for_Africa_Dec2010_lowres.pdf

2) The report “Agrofuels and the Myth of the Marginal Lands” is available to download at http://www.gaiafoundation.org/sites/default/files/Agrofuels&MarginalMyth.pdf

3) The African Biodiversity Network’s Policy Position on Climate Change – False Solutions at COP16 and Beyond can be downloaded at http://www.gaiafoundation.org/sites/default/files/ABN_ClimateChange_Position_COP16.pdf
.