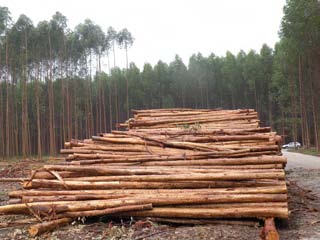 On the occasion of the International Day of Protest Against Monoculture Tree Plantations {1}, the Global Forest Coalition [2], Biofuelwatch [3] Critical Information Collective [4] and Global Justice Ecology Project [5] warn against EU and US plans to expand the bio-economy [6].

This new industrial strategy assumes that massive amounts of additional biomass could be produced sustainably in order to be burned for industrial and commercial electricity and heat, or processed to replace petroleum fuels used in transportation or various manufacturing and industrial processes.

However, there is evidence to show that increasing demand for biomass, and the land on which to produce it, is contributing to staggering increases in food prices, leading to hunger and malnutrition. It is also encouraging land grabs, displacing and undermining the livelihoods of peasant communities and Indigenous Peoples, and triggering greater forest and biodiversity loss.

Furthermore, the belief that using biomass to replace fossil fuels is ‘climate friendly’ has been soundly refuted. While industrial proponents claim it is ‘carbon neutral’, scientists have shown that it may take decades or even centuries for new trees to reabsorb the carbon released into the atmosphere through the combustion of biomass-based fuels.

Policymakers and even some environmentalists claim that introducing so-called sustainability standards and criteria will avoid these problems, but the new Biofuelwatch report “Sustainable Biomass: A Modern Myth” [7] shows that standards are ineffective and serve to legitimise an inherently unsustainable new demand for industrial bioenergy, created by government subsidies and mandates.

Almuth Ernsting, one of the authors of the report, says: “The UK offers a prime example of the dangers of biomass sustainability standards. It is the first country to introduce mandatory standards, which, together with biomass subsidies, will make the UK one of the biggest importers of wood-based biomass worldwide. Soon, UK power stations could be burning nine times as much wood as the country can produce itself. ‘Sustainability standards’ are thus being used to create an inherently unsustainable new demand for wood.”

“One of the biggest threats to the world’s remaining forests is that they will be directly or indirectly replaced by monoculture tree plantations, which are expected to produce more biomass than forests, but which have been documented as storing only a quarter of the carbon that is stored in natural forests,” states Simone Lovera, Executive Director of the Global Forest Coalition. “Additionally, the replacement of biologically diverse forests with monoculture tree plantations has devastating impacts on biodiversity, and on the Indigenous Peoples and local communities that depend on forest resources. If future plantations also include genetically engineered (GE) trees, these impacts will be even more serious and unpredictable.”

Isaac Rojas, Biodiversity Coordinator of Friends of the Earth International, asked recently: “I wonder why many people, including some environmentalists, still believe large-scale tree plantations heavily sprayed with chemicals are desirable or even sustainable… timber plantations have a negative impact on communities, local economies and biodiversity….They are simply a huge concern … in many countries, including my own, Costa Rica.“[9]

In a joint letter that was launched today [8], more than 240 groups and individuals are calling upon governments to stop the expansion of tree plantations.

[1] The 2012 International Day against Monoculture Tree Plantations will be observed through seminars, demonstrations and other actions organized by forest campaigners all over the world. See http://www.wrm.org.uy for more information on the actions that have been planned.

[3] Biofuelwatch is a not-for-profit organisation campaigning against the expansion of industrial scale biomass and biofuels in the UK and US (http://www.biofuelwatch.org.uk)

[4] Critical Information Collective is a ‘one stop shop’ providing access to a wide range of accessible and incisive information challenging corporate-driven economic globalization and promoting fair and sustainable alternatives. The bio-economy alert and all the reports mentioned in this press releases can be downloaded form www.criticalcollective.org/publications/green-economy-3

[6] The ‘Biodiversity and Livelihoods under Attack from Industrial ‘Bio-economy’ Strategy’ alert gives a concise explanation of the risks and negative impacts of bio-economy strategies and links to six key recent reports on bio-economies and other information materials, from a range of NGOs and Indigenous Peoples’ Organizations. The bio-economy alert and all the reports mentioned in this press releases can be downloaded form www.criticalcollective.org/publications/green-economy-3

[7] The report “Sustainable Biomass: A Modern Myth” is available from https://globalforestcoalition.org/wp-content/uploads/2012/09/Biofuelwatch-Biomass-Myth.pdf an Executive Summary is also available from https://globalforestcoalition.org/wp-content/uploads/2012/09/Biomass-Sustainability-Myths-Executive-Summary.pdf