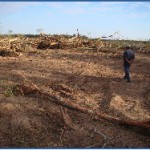 Asunción, Paraguay – A new report and briefing paper launched by Brighter Green and the Global Forest Coalition on the International Day of Biodiversity highlight the negative impact of unsustainable livestock production in South America, the continent with the highest deforestation rates on earth, and the need to redirect the more than US $50 billion in subsidies that is supporting this industry.The report, Impacts of Unsustainable Livestock Production in Paraguay, which will be launched tonight at an event organized by Espacio Organico, Cultura y Participacion and the Global Forest Coalition in Asuncion, highlights how both cattle ranching and the production of soy as feedstock for the intensive livestock industry are causing devastating impacts on forests, biodiversity and Indigenous Peoples in Paraguay.

“In 2013 alone, more than 268,000 hectares of forest were destroyed to expand cattle ranches in the Western half of Paraguay, turning it into the area with the highest deforestation rates on the planet” highlights Dr. Miguel Lovera of the Centro de Estudios e Investigacion de Derecho Rural y Reforma Agraria de la Universidad Católica de Asunción (CEIDRA) the main author of the report. “Indigenous Peoples, including tribes that have lived in voluntary isolation until now, are the main victims of this trend.”

The briefing paper, Redirection of Perverse Incentives for Unsustainable Livestock Production: Guidance for the Implementation of the Convention on Biological Diversity and its Strategic Plan, highlights how this destructive industry continues to benefit from generous subsidies and other forms of Government support, both in the importing and in the exporting countries of beef and soy.

“The overwhelming majority of Paraguayan beef and soy is exported abroad, including to new economic powers like Russia” states Dr. Andrey Laletin, chairperson of the Global Forest Coalition and Board member of the Russian NGO Friends of the Siberian Forests. “Russian consumers should be aware of these impacts and opt for organically produced food from Russia itself instead.”

“More than US $50 billion are handed out each year to the intensive livestock industry and other forms of unsustainable livestock production in the Organization for Economic Co-operation and Development (OECD) countries alone, while they have committed only US $15 billion to support the implementation of the Convention on Biodiversity” adds Mia MacDonald, executive director of Brighter Green. “Redirecting these subsidies to more sustainable forms of agriculture would be one of the most effective and cost-efficient ways to protect biodiversity, and the Indigenous Peoples and local communities that depend on it.”