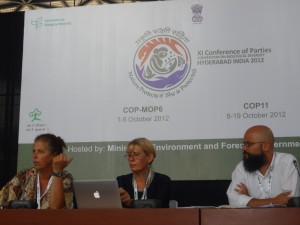 Hyderabad, India – The Global Forest Coalition [1] has welcomed the recommendation of the 11th Conference of the Parties of the Biodiversity Convention (CBD COP11) to review and where necessary to withdraw subsidies and other incentive schemes for biofuels and other economic sectors that cause harm to biodiversity.

The Conference, which ended today in Hyderabad, India, recognized that incentive measures can be significant drivers of biofuel crop plantation expansion, and invites countries to evaluate them using the Aichi Biodiversity Targets, which were agreed upon by the Parties to the CBD at COP10 held in Nagoya Japan, in 2010.

Aichi Target 3 states: “By 2020, at the latest, incentives, including subsidies, harmful to biodiversity are eliminated, phased out or reformed  in order to minimize or avoid negative impacts….”

The Hyderabad Conference also adopted a decision on incentive measures in general, which “Emphasizes that conducting studies for the identification of incentives, including subsidies, harmful for biodiversity need not delay immediate policy action in cases where candidates for elimination, phase out or reform are already known”…. And “encourages Parties … to take appropriate action in these cases, in the form of elimination or initiation of phase out or reform, taking into account national socio-economic conditions….”

Dr. Rachel Smolker of Biofuelwatch, which serves as the European focal point of the Global Forest Coalition comments: “These recommendations from the world’s leading intergovernmental body in the field of biodiversity are very timely since the European Commission also launched its proposals for a review of EU biofuel policies, just earlier this week.”

“The EC proposals are a first step to recognizing that all incentive measures that promote biofuel production should be abolished in the light of their devastating direct and indirect impacts on biodiversity, Indigenous Peoples, local communities and women who depend on biodiversity for their survival.” adds Helena Paul of Econexus. “We hope these recommendations of the Parties to the Convention on Biodiversity will encourage the EU to abolish all support for large-scale industrial bioenergy.”

Simone Lovera, executive director of the Global Forest Coalition noted: “While the recommendations of the Biodiversity Conference on these and other issues are weaker than we would have liked, they still show that many governments are genuinely concerned about the negative impacts of the so-called bioeconomy, and associated new technologies like synthetic biology and geo-engineering, and that southern governments especially are insisting on taking a strict precautionary approach to avoid the devastating risks to biodiverse ecosystems associated with these new trends.”