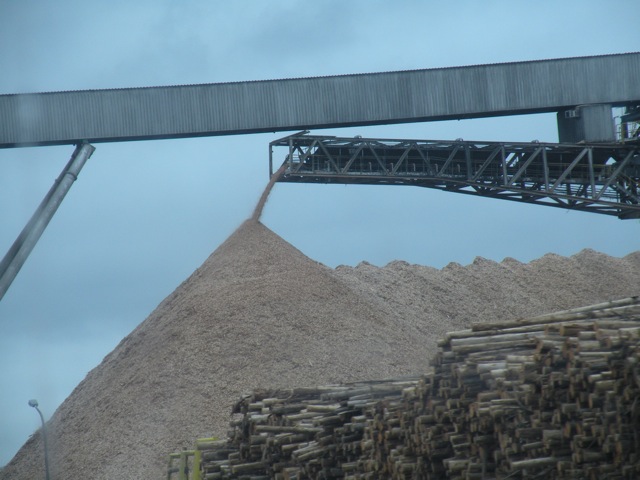 Doha, Qatar – As negotiations failed to finalise an agreement on a controversial forest policy called REDD+ [1] during the ongoing UN Framework Convention on Climate Change talks in Doha, Qatar [2], forest groups published a letter challenging claims that the drivers of forest change are being addressed by countries within the REDD+ negotiations.

Negotiations on REDD+ turned sour in Doha as developing countries realised they can expect very little funding for this highly controversial forest scheme over the coming years. “The REDD honeymoon is obviously over” states Simone Lovera, executive director of the Global Forest Coalition, who followed the talks.

Furthermore, at the same time that REDD+ is being promoted within the UNFCCC to supposedly protect forest carbon, there is a massive expansion of the biomass industry underway, which will generate increased international trade in wood. This is being actively supported by governments such as that of the UK, and will dwarf any attempts made to protect forests within the UNFCCC.

Last week, the UK presented a ‘new’ forest-related funding scheme, which supposedly aims to address the drivers of forest loss [3]. The £300 million funding referred to, however, is not new funding, but money already pledged under existing schemes [4]. In addition, these funds will not stop deforestation or forest degradation: the UK government appears to be unable to see past false private sector greenwashing schemes, like the Roundtable on Sustainable Palm Oil [5], which promote the continued expansion of commodity production and industrial plantations. Certification schemes such as there do not address the real drivers of deforestation. In addition they do nothing to prevent conflict over forest land with indigenous peoples or address the massive carbon emissions generated by peatland destruction for oil palm plantations [6].

At the same time energy companies such as RWE, Drax and E.On – all of whom are converting coal-fired power station capacity in the UK, to create the world’s largest wood-burning biomass power stations — are massively increasing imports of wood pellets.

In a public letter released today [7], the Global Forest Coalition [8] reveals that Europe’s single biggest carbon emitter [9], energy giant RWE, plans to increase pellet production for their power stations in the UK and elsewhere in Europe from 3 million to 6 million tonnes a year – with each tonne of pellets requiring 2 tonnes of fresh wood. One-fifth of wood pellets produced globally are now burned in RWE power stations. Global Forest Coalition is calling on RWE, to cease all investments in biomass and drop its false greenwash claims about wood-based bioenergy.

This massive and escalating increase in demand for wood for bioenergy, which is forecast to attract a total of around £3 billion in subsidies in the UK in the future [10] will lead to the acceleration of forest destruction in the southern US and British Columbia especially [11], the main regions from which RWE is currently sourcing its pellets [12].

RWE’s actions also demonstrate the dubious role commodity certification schemes are likely to play in allowing further forest destruction. As the letter to RWE explains, RWE’s own sustainability label – the Green Gold Label – is not an independent certification scheme, but is in fact closely connected to RWE.

Similarly, in the US, in Columbus, Mississipi, KiOR has spent more than US$200 million on a plant that is supposed to mix shredded wood waste with a patented catalyst, powdered to talcum-like consistency [13], ignoring the health impacts [14] of this biomass-based process. GFC’s North American focal point Anne Petermann of the Global Justice Ecology Project and the STOP GE Trees Campaign [15] adds:

“Expansion of wood-based bioenergy will lead to further destruction of biodiverse native forests in the US South and elsewhere as they are replaced with monoculture tree plantations.  This could even include highly destructive genetically engineered tree plantations if they are legalized. Any scheme to address climate change that advances the conversion of carbon-rich forests to carbon-poor plantations is absurd and bound to fail.”

As an alternative to REDD, GFC strongly supports holistic, non-market based and non- private sector driven approaches to rights-based forest conservation for climate change mitigation and adaptation purposes, as proposed by countries like Bolivia and Indigenous Peoples’ themselves. European countries, and especially the UK, need to review the ways in which they aim to address the drivers of forest loss: their escalating demand for wood including for energy constitutes one of the biggest pressures driving forest loss around the world.

[5] The UK government’s support for the Roundtable on Sustainable Palm Oil is outlined here: http://www.defra.gov.uk/news/2012/10/30/sustainable-palm-oil/. However, certification does address the underlying drivers of deforestation as explained here: http://www.foei.org/en/media/archive/2009/certified-palm-oil-not-a-solution.

[6] For an overview of the UK’s involvement in the biomass trade, and the impacts of that trade on Indigenous Peoples and forests, see Sustainable Biomass: the Modern Myth, Biofuelwatch, September 2012, https://globalforestcoalition.org/wp-content/uploads/2012/09/Biofuelwatch-Biomass-Myth.pdf.

[7] The letter from Global Forest Coalition to RWE can be downloaded at: https://globalforestcoalition.org/wp-content/uploads/2012/12/GFC-letter-to-RWE-FINAL.pdf

[10] This figure is based on projected futue biomass capacity in the UK (see http://www.biofuelwatch.org.uk/wp-content/maps/uk-biomass.html) and government proposals for long-term biomass subsidies (see http://www.decc.gov.uk/assets/decc/11/consultation/ro-banding/5936-renewables-obligation-consultation-the-government.pdf).

[11] Reports from Dogwood Alliance and Greenpeace Canada have published evidence showing that demand for industrial biomass is already significantly increasing pressures on forests in both regions.

[12] RWE has been investing in new-build biomass power stations and Combined Heat and Power (CHP) plants in the UK, Germany, Italy and the Netherlands and countries like Brazil, Central and West Africa are seen as important future suppliers.

[13] Fuel From Waste, Poised at a Milestone: