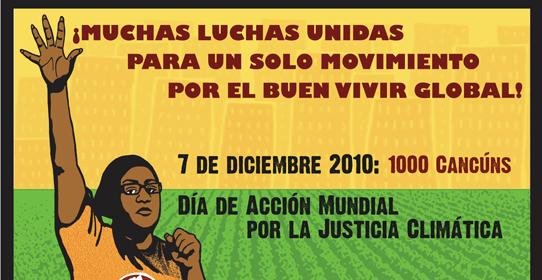 30 Events Across the U.S. and Canada to

Build Alternative Solutions to the Climate Crisis, part of

the 1000 Cancuns Global Day of Action

WHAT: On December 7, with the UN Climate Change Negotiations in Cancun faltering, grassroots organizations across the world will be taking the future of the planet into their own hands. 30 coordinated events will take place in the U.S. and Canada as part of La Vía Campesina’s call for 1000 Cancuns for climate justice worldwide, and as part of the Grassroots Global Justice Alliance’s national call to action in the U.S. All of the actions will have one common goal: to oppose carbon market schemes that prolong our addiction to fossil fuels, and to lift up local solutions that are already reducing greenhouse gas emissions and cooling our planet.

“Communities at the frontlines of the crisis are showing the world the frontlines of solutions,” says Jill Johnston of the Southwest Workers Union in San Antonio, TX. “We are creating communities of resilience committed to climate justice, opposed to REDDs and other false carbon market solutions, and in favor of the principles of the Cochabamba people’s agreement instead of the ineffective and ultimately dangerous Copenhagen Accord. Based on this, we see the climate talks are already off track. By fast-tracking REDDs and removing the Cochabamba people’s agreement from negotiations, it’s clear the US and its few allies are more concerned about political power plays and corporate greed than the environment and human need.”

Actions include a mass action to protest the 710 highway expansion in LA and to advance a local campaign for expanded natural gas bus service, an action at City Hall in Antonio to pressure city council to turn their Mission Verde resolution into a binding law for green jobs creation and clean energy transition, and an action in San Francisco to turn a publicly-owned parking lot into a community garden to showcase the Bay Area’s local agriculture solutions in contrast to harmful industrial agriculture – the source of approximately 1/3 of total greenhouse gas emissions. Events include people’s assemblies in Canada and educational events on climate justice at universities and community organizations across the U.S.

WHY: “The climate policies being proposed by the U.S. government are an international version of the same devastating environmental racism that has plagued our communities for years where poor people of color bear the brunt of pollution, risk and displacement,” says Michelle Mascarenhas-Swan of Movement Generation in Oakland, CA. “More of the same failed approaches will only make climate change worse. And as WikiLeaks documents have shown, the U.S. is resorting to underhanded bullying tactics to ram through a version of the undemocratic and ineffective Copenhagen Accord while completely ignoring essential provisions of the Kyoto Protocol that must be renewed. We are joining with the world to say no more!”

“Week one of the UN climate talks belonged to the old and new Goliaths of the global economy.,” adds Michael Leon Guerrero, National Coordinator of the Grassroots Global Justice Alliance. “Despite pressure from indigenous people and other impacted communities, these Goliaths stubbornly blocked any progress toward a democratic agreement on climate change. Week two and beyond will belong to civil society and the social movements of the world. As our so-called representatives pull power plays to preserve an extractive economy that is destroying our planet, the communities at the frontlines of climate change will be lifting up the solutions we have created by necessity – solutions that are already improving our local environments and cooling the planet.”

La Via Campesina International has called for an international day of action against false carbon market policies and for real sustainable solutions. As an organization of 300 million small farmers from around the world, La Via Campesina’s membership is already cooling the planet through sustainable agriculture (industrial agriculture is responsible for approximately 1/3 of all greenhouse gas emissions). The Grassroots Global Justice Alliance is coordinating the US actions in partnership with La Via Campesina and with community organizations from LA to San Antonio to the Gulf Coast. There will be more than 100 actions around the world, throughout Latin America, Asia, and Europe as well as in the United States and Canada.  The actions include people’s assemblies and forums in Korea, Uruguay, Brazil, Nepal, Turkey, and mass actions in India, Argentina, Indonesia, El Salvador, the Philippines, and Mexico.  All together these actions and events will bring together an estimated 1 million people.