In a landmark attempt to curb deforestation, the European Commission and Parliament are considering a draft regulation that seeks to stop products that have caused forest degradation or deforestation from entering the EU market. It’s a complicated measure, and one that has been cheered by activists and also subject to critique, and we add to the discussion with this report on what it would mean for women.

We assert that there is a need for a gender-just implementation of this proposed legislation, otherwise, it could end up marginalizing women producers and particularly smallholders, including Indigenous and local communities that rely on access to forests for their livelihoods. An implementation that is gender-blind threatens to make the situation of rural women more precarious and deepen existing structural inequalities.

Key recommendations of the report include:

You can read the full report in PDF or HTML version here. 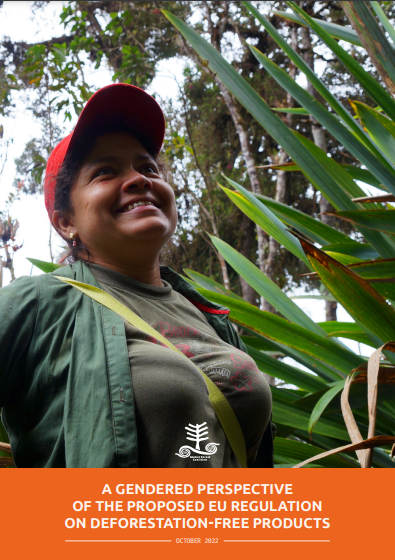 In November 2021, the European Commission published a proposal for a Regulation on deforestation-free products. The legislation seeks to curb deforestation and forest degradation driven by the expansion of agricultural land used to produce forest and ecosystem-risk commodities (FERC) by stopping products that have caused forest degradation or deforestation from entering the European Union (EU) market. The original draft Regulation was limited to six key commodities – cattle, cocoa, coffee, palm oil, soya, and wood. It is expected to be adopted in 2023 following tripartite negotiations between the European Parliament, Member States, and the European Commission.

While most non-governmental organisations (NGOs) have been positive about the proposal, several important concerns have been raised, some were acted upon during reviews by the EuropeanCouncil (of relevant Ministers) and the European Parliament. These included calls to enlarge the protection of human rights, particularly protections for Indigenous Peoples and other marginalised groups.

This paper seeks to add to existing critiques on the draft Regulation, with a specific focus on ensuring the EU adopts an ambitious, gender-inclusive law in line with its commitments under the Gender Equality Strategy 2020 – 2025 and the third EU Action Plan on Gender Equality and Women’s Empowerment in External Action 2021–2025 (GAP III). This means highlighting gender dimensions, addressing and amending existing components of the legislation that risk negatively impacting women and developing accompanying and complementary measures which are supportive to women.

Despite the explicit commitment of the European Commission in GAP III that it will “integrate a gender perspective in all major Commission initiatives during the current mandate” and promote a gender-transformative approach in agriculture and food systems, the Regulation proposed by the European Commission, which primarily addresses agricultural commodity chains, was entirely gender blind. This is not just problematic from a perspective of EU policy coherence or the credibility of the EU’s claim that it would be “a global front-runner in promoting gender equality,” but also from a perspective of human rights and equity, as the legislation in its current form might have significant negative consequences for women. Happily, on 13 September 2022 the European Parliament adopted several amendments that would strengthen the gender dimension of the legislation, including a commitment to ensure the full participation of women in partnerships and cooperation and other forms of stakeholder engagement,[1] and a requirement for the Commission to continuously monitor the Regulation’s impacts on women, amongst others.[2] It also included references to gender equality, women’s rights and the need to address possible negative impacts on women in the introduction to the proposal. The upcoming tripartite negotiations between the European Parliament, Commission and Council will determine whether these amendments are included.

According to the World Bank, women in all their diversities are most commonly responsible for the production of food crops within small-scale farming systems. As such, any impacts on small-scale farming and smallholders may disproportionately impact women and other marginalised groups.

Furthermore, the draft Regulation omits critical aspects associated with the sustainability of value chains in corporate governance, which may have short-, medium-, and long-term impacts on livelihoods, cultures, women’s rights, and the achievement of the Sustainable Development Goals (SDGs). This could also impact the complementary EU rules to achieve a just transition, climate justice, and equity as required under the United Nations (UN) Framework Convention on Climate Change.

Specifically, the cooperation and partnerships originally proposed in the Regulation would risk excluding the voices and specific needs and interests of female smallholders. As women are underrepresented in cash crop production and overrepresented in producing food for the household and local markets, a gender-blind partnership strategy would risk prioritising the commercial interests of the predominantly male producers of FERCs over the livelihood needs and interests of female subsistence producers.

With climate change being a key cause of uncontrolled forest fires and other drivers of forest loss, any EU policy or legislation that promotes international commodity trade and associated transport-related emissions over local, more sustainable food chains is counter-productive from a forest conservation perspective. It would also be contrary to the EU’s Farm to Fork Strategy to create shorter supply chains and reduce dependence on long-haul transportation.

Additionally, the original draft Regulation used an ambiguous and narrow definition of “forest degradation”, which protects primary forests only. This could easily be interpreted as allowing the replacement of large patches of forests, especially secondary and regenerating forests, with monoculture tree plantations. Global Forest Coalition (GFC) research shows that tree plantations, even when not directly replacing forests, have a significantly negative impact on women. They cause biodiversity loss, land concentration, the depletion of freshwater resources, and agrochemical pollution. They also have social impacts like rural unemployment and depopulation, as it concerns a highly labour-extensive form of land use that provides a limited amount of often seasonal jobs, primarily for men. All these impacts have consequences on women. Here again, the proposed amendments of the European Parliament are helpful, as they expand the definition to “the reduction or loss of biological or economic productivity and complexity of forests and other wooded land and other natural ecosystems, affecting their species composition, structure or function”.

There is also a need to ensure traders are required to comply with international human rights standards, including the UN Convention to Eliminate All Forms of Discrimination Against Women (CEDAW), the UN Declaration on the Rights of Indigenous Peoples (UNDRIP), and the UN Declaration on the Rights of Peasants (UNDROP), which are particularly relevant for rural women. The need to comply with national legislation can be positive in those producer countries with progressive legislation on women’s rights. However, as some countries have not incorporated key international human rights standards into their national laws, such compliance must be complemented by an explicit requirement to also comply with international standards. Moreover, compliance can be hard to monitor in the absence of strong provisions on access to justice. Rightsholders that are aware of such national laws and international human rights standards, including women, might lack the capacity to voice a substantiated concern as they might not know who the relevant ‘competent’ authorities referred to under Article 29 are, or what procedure they should follow to voice their concerns. That is why the European Parliament’s proposal on access to justice should be adopted.

The Regulation’s strict due-diligence requirements might also present potential obstacles to women smallholders in sectors that provide significant income for women, although it should be noted that the profits of such commodity production seldom end up in the hands of the women doing most of the work (see below). Regardless, the Regulation should be accompanied by complementary measures that facilitate a just transition of women and men who currently depend on forest-risk commodity production for the EU market towards more sustainable livelihood alternatives.

To address these concerns, EU policymakers including the European Commission, Members of the European Parliament (MEPs) and Member States should consult all stakeholders and rightsholders, particularly women smallholders and other vulnerable communities, as part of a thorough gender analysis of the proposed Regulation and make amendments to ensure it will help achieve EU and international commitments on human rights, gender equality, and women’s empowerment.

Particular emphasis should be placed on developing strategies and guidance for establishing partnership-based agreements, which present a specific threat and opportunity to the interests of women and smallholders in general. A profound gender-sensitive assessment of the needs and challenges of different smallholders should be undertaken before partnerships are established.[3]