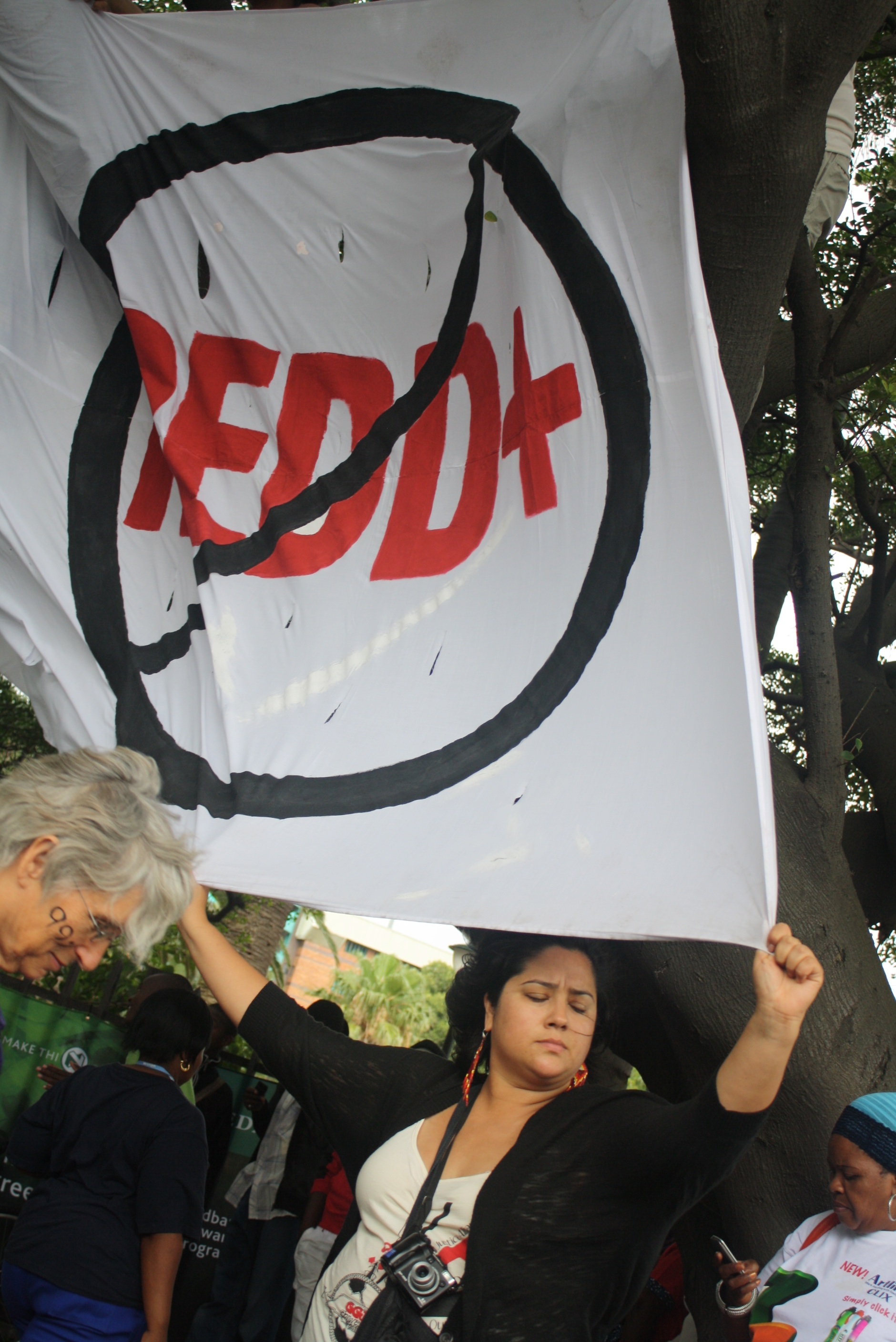 Rio de Janeiro– While sharing the view of other civil society groups that the outcomes of Rio+20 will contribute little to addressing the multiple crises humanity is facing today, the Global Forest Coalition [1] has welcomed the opposition of many developing countries to market-based approaches like REDD+ [2]. Thanks to the opposition of developing countries many proposals promoting such “green economy” approaches were deleted from the text.

A new GFC report written by its Latin American NGO focal point Censat Agua Viva [3], “Green Economy in the Light of Climate Change Policies”, highlights why the ‘green economy’ proposal will lead to devastating consequences for Indigenous Peoples and other forest peoples. According to the report, the Green Economy “will exacerbate the current systemic crisis of humanity and the planet and it will boost privatization, commodification and financialisation of nature.” On the first day of the official summit, 50.000 people showed their opposition to the concept of “the Green Economy” during a massive demonstration in the heart of Rio de Janeiro.

“While being everything but ambitious, Rio+20 might be a turning point in terms of reversing the increased sell-out of UN sustainable development policies to the private sector we have experienced since the 2002 ‘Rio+10’ World Summit on Sustainable Development [4]” states Global Forest Coalition’s executive director Simone Lovera, who attended Rio ’92 and the Rio+10 as well. “Southern countries have clearly demonstrated here that they no longer want their forest conservation and other sustainable development policies to be dictated by a small corporate elite in the North that is promoting socially unjust and unreliable environmental services markets.”

One of the market-oriented policies that met fierce opposition by the developing countries was REDD+, a reference to which was almost removed from the text. Developing countries did succeed to remove a reference to “innovative financial mechanisms” from the text on biodiversity. Similar corporate-driven initiatives like the Sustainable Energy for All Initiative [5], which is seen by many NGOs as a vehicle to promote corporate interests in industrial bioenergy and other destructive forms of energy, were only ‘noted’ rather than ‘welcomed’ in the text.

“The cool reference to SEFA is a clear indication that many governments share our concerns about the hidden corporate agenda behind this UN initiative” explains Almuth Ernsting, co-director of Biofuelwatch.

Taghi Farvar, an Indigenous leader from Iran and chair of the International Consortium on Territories and Areas Conserved by Indigenous Peoples and local communities states: “The Rio+20 outcomes document is clearly insufficient to address the current crises, but at least it recognizes the importance of the traditional knowledge and practices of Indigenous Peoples and local communities for sustainable development, and their rights as enshrined in the UN Declaration on the Rights of Indigenous Peoples. Isis Alvarez of the Global Forest Coalition in Colombia points out “The document also pays tribute to the rights and role of women in sustainable development, even though the text is less strong than many women’s major group campaigners had hoped for and sadly, there is no explicit recognition of the important role of women in forest and biodiversity conservation.”

[1] The Global Forest Coalition is a coalition of NGOs and Indigenous Peoples’ Organizations from 39 different countries calling for rights-based, socially just forest policies

[2] REDD+ stands for reducing emissions from deforestation and forest degradation and enhancing forest carbon stocks. It is a controversial forest policy that was elaborated under the UN Framework Convention on Climate Change

[4] The World Summit on Sustainable Development (WSSD) took place in 2002 in Johannesburg, South Africa, to commemorate the 1992 UN Conference on Environment and Development, which took place in Rio de Janeiro

[5] The Sustainable Energy For All Initiative was established by UN Secretary General Ban Ki Moon. A high level panel was selected and an action agenda released. It is expected that the initiative will be formally launched and country and other commitments under the initiative will be announced at the Rio+20 Earth Summit. For more information: http://www.sustainableenergyforall.org/