The organization Protect the Forest criticizes the government for their implicit support for the destruction of the Ojnare forest, on the island of Gotland in the Baltic Sea. Members of Protect the Forest are actively taking part in the struggle against the plans for a lime quarry in the area, and the organization encourages others to take part in the protests. The logging attempts have been held off for a week so far.

“The struggle to save the Ojnare forest has been going on for seven years,” says Lisa Behrenfeldt from Protect the Forest. “It is nothing less than a scandal that the company Nordkalk now has permission to quarry for lime in the area. After many rounds of denials and appeals in court, the environmental supreme court could only give its permission to the project after the government removed the environmental law paragraph that forbids quarries threatening red-listed species. In the area planned for the quarry, 266 red-listed species have been found.”

The Ojnare forest is part of a larger natural area with old pine forest, limestone plains with sparse prairie-like vegetation, and small wetlands. It lies between two nature reserves, which are also Natura 2000 areas and protected under EU law. The Swedish Environmental Protection Agency plans to make the area a national park. In fact, the decision is already made, and will be effected if only the quarry does not destroy the area.

“To give Nordkalk permission to quarry in Ojnare is nonchalant and foolhardy,” says Jonas Idevall Hagren from Protect the Forest. “It is impossible to predict what will happen if you make a hole which is 25 meters deep into the limestone bedrock and covers 170 hectares. The projected quarry threatens the water supply of the whole northern part of the island.”

By permitting the quarry, Sweden breaks both international and national commitments, such as the Convention on Biological Diversity and several of the national environmental objectives:

– A Rich Diversity of Plant and Animal Life

“It’s not just about the weathered old pines and the limestone in Ojnare,” says Lisa Behrenfeldt. “It is frightening that the government is prioritizing short-term profit over the water supply and natural values which can’t be replaced in the foreseeable future. If this area doesn’t have what it takes to be protected, which area does?”

An appeal has been made to the supreme court. There is still a chance to let the Ojnare forest be a national park instead of a hole in the ground. A group of activists has shouldered the responsibility now that the government has failed to stop the quarry, which reveals how little the government’s fine words about the environment are worth in practice.

Members of Protect the Forest have been in Ojnare during several periods of time since Nordkalk got the go-ahead from the environmental supreme court in the beginning of July.

“We demand that the government acts now!” says Jonas Idevall Hagren. “Quarrying areas with redlisted species must be made illegal again.”

Press contacts: Lisa Behrenfeldt, 070-4620373, member of Protect the Forest, in Ojnare until Monday

Jonas Idevall Hagren 073-5707021, member of Protect the Forest, in Ojnare for the second time this summer.

Press photos for free use 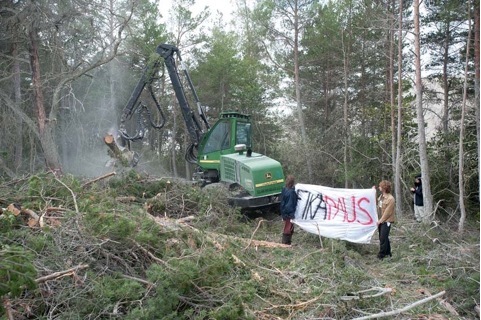